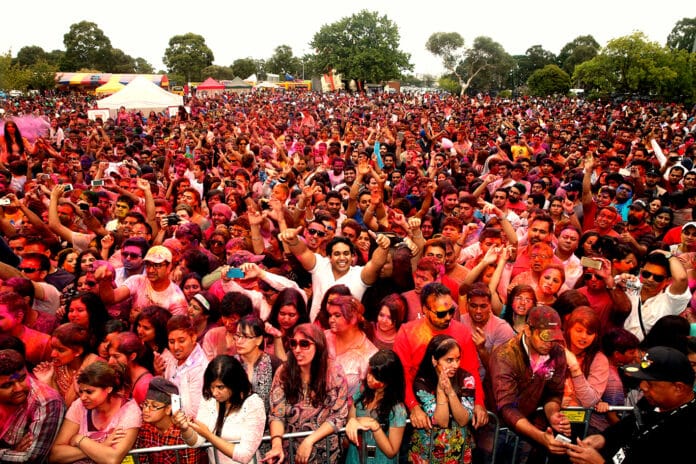 Reading Time: 2 minutesLive music from Indian rock star adds to the colour and fun of the festival, writes PREETI JABBAL

I wish every Holi festival could coincide with the Easter long weekend, as it did this year. While our mainstream counterparts were busy concluding Lent and conducting egg hunts, we were busy feasting endlessly and playing with colours. The more gregarious variety, like yours truly, were celebrating both with equal zest. Double the fun! In fact, in my case, it was quadruple the fun as I caught up with different groups of friends and played Holi in different locations over the four days. One celebration was marked with pani puris filled with vodka water, another was spent aiming water guns and balloons at unsuspecting friends, the third was dedicated to dancing on repeats of rang barse and the fourth was spent jostling with crowds to attend the Holi festival at Sandown Racecourse. While it was hard to choose which experience was more enjoyable, the Sandown Holi with a special guest appearance to pep up the proceedings was the one to write home about.

The draw card for AIII’s Holi celebration was the presence of singer Mika, also know as the enfant terrible of Indian music industry. With multiple super-hits to his credit, Mika’s recent fame and colourful personality were well suited to the event. As Mika delved into the show with full force, he certainly lived up to the hype. Addressing the sea of colourful and jovial faces, Mika announced with characteristic chutzpah, “You can love me or you can hate me, but you certainly cannot ignore me!” He invited the audience to visit his official Facebook site and with popular songs, wry comments, jokes and wisecracks, Mika had fans eating out of his hand in no time. It was easy for the rapt audience to forgive and forget that Mika had rocked up a couple of hours later than expected. The jubilant crowd danced and tapped their feet and fingers as Mika belted out one famous song after another. ‘Jugni’, ‘Singh is King’, ‘Chinta Ta’, ‘Pungi baja le’, ‘Saawan mein lag gayi aag’, ‘Dhinkachka’ – each song was sung with fervour and welcomed with enthusiasm. It was a rollicking show and the thousands who came to celebrate the festival of colours took home some indelible memories thanks to the ‘powerhouse entertainer’.
The Australian Indian Innovations Inc (AIII) has been celebrating Holi for the past 6 years, and the event has been improving with each experience. This year’s entertainment segment including Mika’s rocking show was presented by Sizzlin Events and Muzique Events. According to an announcement made during Mika’s show, AIII is planning to get famous actor Salman Khan as their guest for the Diwali Mela scheduled later this year. Mika was quick to point out that Melbournians are hearing from one badmash (himself) this Holi, and can now meet another badmash from Bollywood during Diwali. The common attitude, swagger and controversies aside, a visit from these two super sensations from India will surely spice up the entertainment scene in Melbourne.