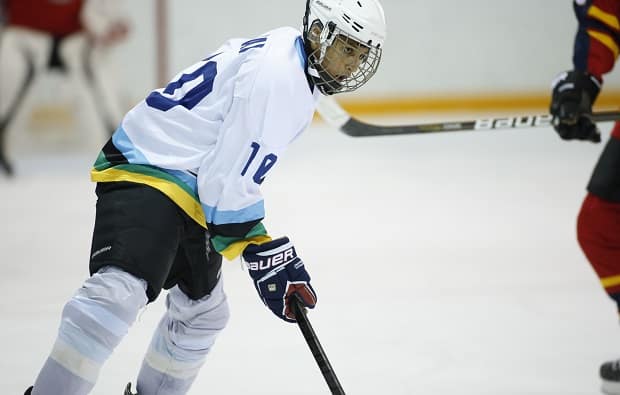 Reading Time: 3 minutesDespite the intense, and sometimes rough, nature of the game, one young athlete has taken to ice hockey like a duck to water

It’s the fastest and one of the most brutal sports in the world. The “ball” is frozen before play and frequently travels at over 160 km/h. The average professional player loses about three kilos during a game, while there’s a 68 per cent chance that they will lose at least one tooth during their career. During a regular season at the top level, blows to the head have resulted in up to 88 players missing 1697 games due to concussions. And did we mention that it’s all played on an unforgiving surface that often exacerbates injuries?

Ice hockey may not be the most common sport in Australia, but you should expect to see a lot more of it as the National Hockey League begins making its way onto television sets around the country. For 14-year-old Mohak Issar, though, ice hockey has already been his biggest passion for half his lifetime, and his recent selection in the NSW Under 15 State Ice Hockey team is only the latest in a string of exciting achievements for this talented athlete.

This month Mohak will be competing in the Kurt DeFris Ice Hockey Championships taking place from July 9-12 in Newcastle. He will be up against teams from all the Australian states. Having already represented NSW in 2013, Mohak has taken the achievement in his stride – but it does not mean he was any less thrilled about making the final cut of 20 players, after taking part in three separate tryouts.

“I was so excited. It’s a different, higher age group. I didn’t think I was going to make it and I was jumping with relief,” Mohak said. “My friends and family were really happy for me – my dad was so happy, it was all we could talk about for the next few days!”

Mohak began playing ice hockey after attending a family friend’s training session back in 2007. Asked by his father, Puneet, whether he was interested in taking up the sport, Mohak had no hesitation in saying yes. Although he began playing for fun, and only later began taking it more seriously, Mohak was always drawn to the nuances of the game.

“It’s a different kind of sport – not many sports are on ice. It’s the fastest sport in the world, and it gives me an adrenaline rush. It’s very unique”.

In 2013, Mohak competed in the 13th International Friendship Games in Canada, where he played almost daily for two weeks against teams such as Canada, Japan, South Korea, New Zealand and the United States. The NSW team placed third in the competition, and it ignited Mohak’s belief that he could play against bigger, stronger players at higher levels.

“Now that I’ve started playing ice hockey with contact (allowed between players), it’s gotten a lot rougher. Now that I’ve built up in age groups, there’s a lot more contact. The first year I played contact, I was pretty scared, but as the years progress, you get used to it and you don’t get as scared”.

It hasn’t been an easy road – Mohak trains at least six days a week, including sessions both on the ice and off the ice. By waking up early each morning, Mohak is able to maintain his studies at Patrician Brothers College, Blacktown, and improve his ice hockey skills.

“I get up in the morning, generally at around 5am, so it doesn’t clash with school. You should get up early if you want to become an athlete – in the morning generally you’re free, you can practice and train maybe one hour everyday”.

Along the way, Mohak has had plenty of support from his committed father, as well as his coach, Frankie, who trains with Mohak almost every morning.

Looking ahead, 14-year old Mohak, whose favourite NHL team is the Anaheim Ducks, is extremely ambitious and motivated.

“There are trials in October for the Under-18s youth Australian team. My goal is to get into that team either this year or next year”.