Love my city: A walk from Taronga Zoo to Balmoral 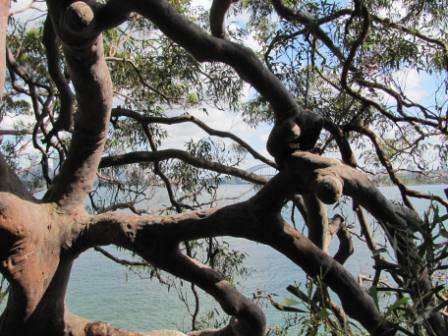 In the early 19th century, American whaling ships would anchor at Mosman Bay following their expeditions to southern waters. When visitors went onboard, they were given chowder, a dish favoured along the US Atlantic coast, made from boiling oysters, fish, salt pork and vegetables. The bay soon became known as Chowder Bay. A great way to explore the area is to walk here from the Taronga Zoo ferry wharf and then continue onto Balmoral Beach. Just don’t plan on lingering. As I laid out my picnic lunch, I drew the attention of curious onlookers as I was set upon by five kookaburras, eager to try my sandwich.
One of Sydney’s newest parks, Headland Park straddles the ridgeline along Middle Head Peninsula, once home to Borogegal aboriginals who had lived there for thousands of years, fishing in the bays and inlets. Fortifications with cannons and barracks were built along the escarpment in 1801 shortly before the Napoleonic Wars of 1803-15, to protect the colony from possible French attack. For two more centuries, the Defence Department occupied land at Middle Head, Georges Heights and Chowder Bay. In 1916, Australia’s third-largest military hospital was established at Georges Heights to care for wounded soldiers returning from the western front of Europe and in 1940, Middle Head became the home of HMAS Penguin, a naval base. During World War II a submarine net was placed across the harbour, with guns installed at Georges Head. Japanese midget submarines made it past these defences, entering the harbour in May 1942.
The bushland along this walk, ranging from coastal heath and scrubland to woodland and forest, provides a habitat for native wildlife including water dragons, blue-tongued lizards, ring-tailed possums, kookaburras, rainbow lorikeets, currawongs, herons and dollar birds. Signs such as ‘Caution possums’ dot the roadside, and encounters with animals are not uncommon.
The walk to Chowder Bay begins at Taronga Zoo, which is well deserving of a separate visit, and onto Bradley’s Head, one of the most scenic sections of bushland that Sydney has to offer, named after Lieutenant William Bradley who landed here in 1788. There are several historic sites to explore including Athol Hall, with a large wedding reception in progress on the day I visited, and the HMAS Sydney memorial mast, one of the most distinguished Royal Australian Navy warships of World War I, as a tribute to those who served.

The walk continues to Clifton Gardens, named after TH Cliffe, captain of one of the American whaling ships, past beautiful angophoras or Sydney red gums with their curved, twisted trunks, the bushland maintained by local volunteers. Two of the original members, the late Bradley sisters, developed the method of bush regeneration that is still used across Australia today. Around a headland, Clifton Gardens Park is an idyllic setting for picnics, with an adventure playground and protected beach with a netted enclosure ideal for swimming and snorkelling, enabling a view the abundant marine life.
Just beyond is Chowder Bay, a cluster of historic buildings built in the 1890s for the Submarine Miners’ Corps, now operating as cafes, restaurants, a dive shop with scuba gear and kayaks for hire, a traditional timber boatbuilding shed and Sydney Institute of Marine Science.
At Bacino Kiosk, head up a series of stairs to Georges Head and a charming maritime village of historic buildings with an artist’s precinct and Frenchy’s café will greet you. The lookout provides a stunning vantage point with uninterrupted views across to Manly, Vaucluse and back to the city. Continuing along the bush track, a continuous line of metal stairs leads down to Balmoral, named after Balmoral Castle, in Aberdeenshire, Scotland. The beachside promenade, esplanade, rotunda and Bather’s Pavilion, which date back to the 1930s, are heritage listed. The beach has splendid views to North Head, Manly and Clontarf.
This is one of Sydney’s best urban walks, with vantage points overlooking the harbour and Pacific Ocean, well deserving of a visit.

Travel notebook
Taronga Zoo is a pleasant, if somewhat exhausting full day excursion, that children especially will thoroughly enjoy. Entry is expensive, with a 15% discount for families. Worthwhile considering is the annual Zoo Friends Membership that provides unlimited entry throughout the year. A guided behind the scenes tour with a zoo keeper is a worthwhile additional expense. Open every day, take the Sky Safari from the wharf up to the main entrance then follow the winding pathways back down. Children love entering the native animal enclosure to view wallabies, echidnas and koalas.
T: (02) 9969 2777 W: zoo.nsw.gov.au
The Sydney Harbour Federation Trust was established by the Australian Government to preserve Sydney’s maritime and defence heritage and offers tours, open days, programs for children and downloadable maps of walks.
T: (02) 8969 2100 W: www.harbourtrust.gov.au
Insider’s tip
Water dragons usually scamper off, but if they are slow to move, give them time, as they have sharp claws. Signage is generally good.
Getting there
I did the walk in one bite size chunk. While the time given is two hours, allow time to amble along. The most pleasant way to begin is by ferry from Wharf 2 Circular Quay to Taronga Zoo returning from Balmoral by bus. Buses are fairly infrequent.
Trip planner: T: 131500 W: www.131500.com.au
If coming by car, access is via Middle Head Road, Mosman.
Where to eat
The area is well served by cafes and restaurants with more options in Balmoral or pack a picnic lunch.