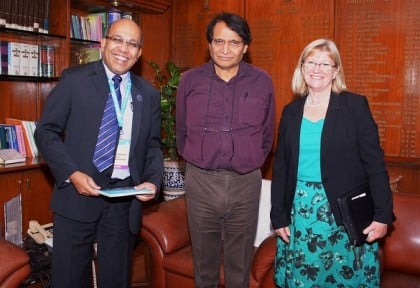 
After an extremely competitive global selection process, The Institute of Railway Technology (IRT) together with partners, Balaji Railroad Systems Ltd (BARSYL) – leading railway consultants in India, PwC, and the Indian Institute of Bombay (IITB) were selected as the preferred supplier.
The newly applied research and development institute in India will be called SRESTHA (Special Railway Establishment for Strategic Technology & Holistic Advancement). It will be a locally engaged organisation but with a global reach as the aim is to become a world leader in the advancement of rail.  Significantly, the project will also provide guidance to Indian Railways on international models that can be adapted to the Indian railway environment.
Mr. Ravi Ravitharan, Director of Institute of Railway Technology, told Indian Link that the partnership will help advance railway technology both in India and around the world.
“This collaborative venture will begin a new chapter for Indian Railways as it will enable the country to move forward keeping in mind the travel needs of the current and future generations,” he said. “It will help provide the Indian public with modern and innovative mass-transit and freight services, which will in turn help fast track the nation’s industrial progress.”
Indian Railways is one of the world’s largest railway networks, comprising 92,000 kms of track and employing over 1.3 million people. The network carries around 22 million passengers per day and over a billion tons of freight annually.
Monash University’s Institute of Technology (IRT) is the premier track and vehicle railway research centre in Australia. IRT provides efficient and practical solutions to the railway industry, creating linkages with people and institutions which deliver a range of mutual benefits in railway research and operations. IRT’s projects extend from heavy haul to mass transit, high speed, general freight and passenger systems.

“I am extremely pleased to be invited with our partners to assist with this significant project, which will support future research and technology development related to critical infrastructure for India,” Mr Ravitharan said. “Indian Railways is one of the largest employers in the world and this is a very important project not only for IRT but also for Victoria and Australia.”

A pioneer and true visionary leader, Mr. Ravitharan was awarded the coveted 2014 Railway Technical Society of Australasia (RTSA) Individual Award, in recognition of his outstanding achievements and contributions to the field of the Australian and international railway industry.
An exceptional combination of sound business acumen and strong research skills, Mr. Ravitharan has elevated and strengthened IRT as an unparalleled leader in railway technology. He has chaired several international conferences and has more than 70 publications in leading international journals and research periodicals – he possesses an impressive and inspiring list of accomplishments, achievements and awards.