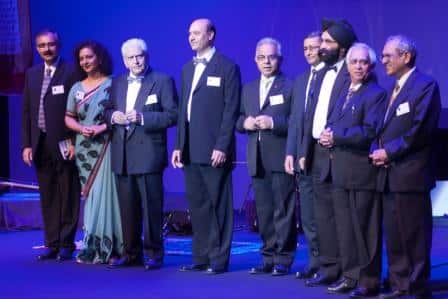 It was an adventurous, but pleasant blend of music that kept the audience entertained at the Beethoven To Bollywood concert held recently by the Friends of The Children Foundation. The musical event helped raise funds for the Royal Children Hospital Good Friday Appeal. This year’s RCH appeal is expected to raise $60,000 – $80,000 for purchasing two additional Gaymar Hypothermia machines (which is essential ICU equipment that lowers the body temperature) and to provide 10 wheelchairs for disabled children.

The concert headed by Sam Bedi was an inventive musical exploration, digging into associations of Indian cinema with the mood of Beethoven presented successfully by a team of young artists. Traditional Indian instruments like the sitar and tabla came together in compositional forces with the piano, to offer a very recognizable new blend. The result was an evening of pure and simple pleasure in a musical world, created with an essence of the West with the magic of the East.

The B-to-B team that travelled from Singapore to entertain the audience in Melbourne included Dexter, Govin and Krsna Tan. S

am’s children Sanjana and Sameer Bedi also performed for the first time in the city of their birth. (Sam migrated from Melbourne to Singapore when his children were very young). It was befitting to have a performance by a team of children under the banner of FOTCF, to raise funds for children. The packed concert was held at the Besan Centre at Mount Scopus College, Burwood.

Besides Sam Bedi’s virtuosity on the piano, some standout performances were from Govin and Krsna Tan on the tabla and sitar respectively. The ensemble’s group chemistry was apparent as they switched and combined styles to create a unique fusion. The passion that Sam reserves for music was evident in his eloquent introduction to each segment. Sharing his experiences and thoughts, he conveyed the underlying message of altruism in a practical context. A slideshow depicting the efforts of FOTCF over the years and moving pictures of ailing children at the Royal Children Hospital, added to the emotional appeal.

Shashi Kochhar, Founder of FOTCF addressed the audience along with Rakesh Raizada from Commonwealth Bank. Mr Raizada also announced the names of the two winners of the lucky draw. Towards the end of the show the entire hard-working team of FOTCF was invited on stage for an ovation. These included Dr Jasbir Bedi, Shashi Kochhar, Inderjit Jasal, Suvinder Sawhney, Alok Rohatgi and Rajiv Chaudhary. Kudos to the organisers for threading together an entertaining event with professionalism.

It was an evening where people forgot to look at the time and did not complain when there was no break. For a couple of hours they indulged in the strains of mostly familiar music, interspersed with a couple of dances by the talented team from Bollywood Beats. The surprise was saved for the last, where the mood changed from upbeat to vivacious with a gidda dance performed by local amateur artists. Post-event feedback was very favourable. The concert was a breath of fresh air from all the have-seen-before events that are churned out in the name of charity.

This one definitely got people’s votes, along with their money.