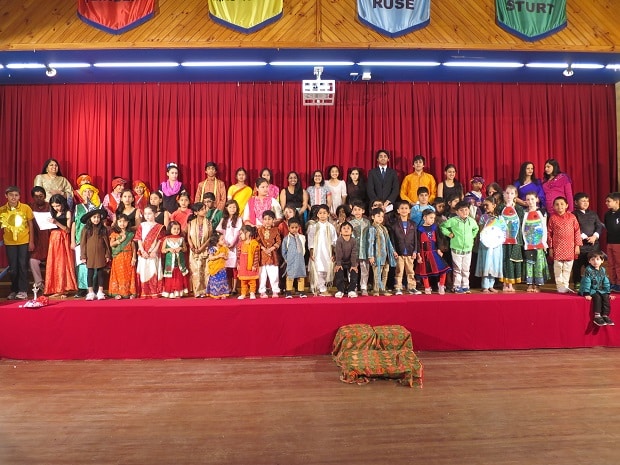 Reading Time: 3 minutesIABBV School’s Hindi Diwas celebration lives up to its motto ‘We shall overcome’

As Indo-Australian Bal Bharatiya Vidyala celebrated Hindi Divas in mid-September, the students sang the school song Hum honge kamyaab (We shall overcome) and the adults joined in.

It must surely have been a moment of pride for founder Mala Mehta OAM and many of the volunteer teachers, who have slogged for 27 years to keep the school afloat.

Finally, perhaps with that school song as inspiration, it looks as though they are here to stay.

As the community looked on, the students collected their trophies for excellence, and showed off the Hindi skills they have picked up in the year.

The main theme of the school song, hope, formed the inspiration for one batch of students who presented a short skit entitled Badaee Ka Dava.It was based on the question, which of the human needs like hunger, thirst and sleep, is the greatest. It was concluded that ‘hope’ must surely win this honour. How very apt for IABBV!

The littlies, for their item, wondered, Surya aur chanda aasman mein kyun rahte hain? Why do the sun and the moon live in the sky? They answered their own question with a mythological tale.

Senior students picked Anzac Day as their theme, reflecting their desire to integrate their heritage with that of the mainstream.

One of the highlights was the poetry recitation competition. There were some excellent performances from the kids under 10; the enunciation was impressive, and even though the choice of poems seemed rather age-inappropriate, it is admirable that they are becoming acquainted with the gems of contemporary Hindi literature.

Support for school from the community, organisations such as Australian Hindi Indians Associations, Bharatiya Vidya Bhacvan, and government agencies such as Hornsby Council, NSW DEC Community Languages program and the Indian Consulate in Sydney.

For Mala Mehta, it is the kids that make it all worth it. She glows with pride each time they come off stage, whatever the occasion.

“I love my bachchas,” she says frequently.

For many of the students, it is her genuine warmth and affection in her interactions with them that is the highlight of their Sunday classes at Hindi School.

Equally, parents form a vital part of Mala’s efforts at IABBV, for it is their devotion to their native tongue that keeps her going. On this occasion, after a community-sponsored lunch, Mala took the adults on an Anatkshari challenge while the kids took time out to chill. Four teams, melodiously named “Bhairavi”, “Yaman”, “Bhopali” and “Pahari”, vied for the honours, and made for a wonderful afternoon of entertainment.