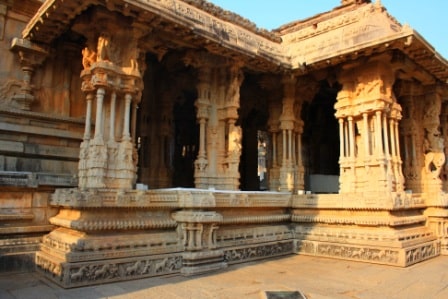 Reading Time: 4 minutesLectures throw light on the architectural greatness of this former capital of the Vijayanagar Empire, writes CHITRA SUDARSHAN

Dr George Michell, author and historian presented a series of talks titled Discovering the Deccan on April 23 and 24, at the Yasuko Hiroaku Room of the Sydney Myer Centre at Melbourne University. Through photographs and slides presented at the talks, the packed and appreciative audience were left with a resolve to surely visit the village of Hampi in northern Karnataka, and in the not-too-distant future. As one who had been to the historic site just a couple of years ago, this writer can only endorse it! There is not another site in India where an entire medieval city and its ruins are preserved to be seen and appreciated.
Dr Michell’s talk was organised by the Australia India Institute in collaboration with the Faculty of Architecture, Building and Planning, University of Melbourne.
Speaking of the Chalukyan architecture, as evident in the area of Aihole, Pattadakkal and Badami, Dr Michell said there was a blend of Dravidian and Nagara styles of temple building. In Pattadakkal itself, some of the temples in the same complex are built in one style, and some in the other. These were built between the 6th and the 8th centuries AD, and one was built by a queen to commemorate the conquest and the sacking of Kanchipuram, which was the capital of the Pallavas, by Chalukya king Vikramaditya. Pattadakkal has now been declared a world heritage site by the UNESCO.
Hampi is the name of the present day village, which was once the capital of the great Vijayanagar Empire, and is also a UNESCO World Heritage site. Introducing briefly the wealth and splendour of the Vijayanagar kingdom, Dr Michell cited the works of Portuguese travellers to the Deccan in the 16th century, who were simply awestruck by the riches they saw, for they had seen nothing like it in Europe.  Indeed many maps of Asia available in Europe in the 16th century have only the Vijayanagar kingdoms marked on the maps of India. Until then, the kingdom was the only place where diamonds were available, and that is where Europeans went to buy them.
The ruins of the Vijayanagara kingdom are in a splendid setting with the rocky and boulder-strewn landscape, with the majestic Tungabadra river flowing through what seems a harsh and inhospitable site. The Vijayanagar kings deliberately chose such a site to protect themselves from the southward march of the Sultanates of the time. The river also provided the water needed for irrigation and agriculture, and by all accounts, the capital alone must have sustained a fairly large population.  Several canals criss-cross the landscape and present day canals were built largely on the ancient system. Finally, this was, and is, a sacred site, believed to be the Kishkinda of the Ramayana. Indeed everywhere are reminders of the Ramayana epic: Sugreeva’s cave where the monkeys hid the jewels Sita threw from her vimana as she was abducted by Ravana, the mark on the rock where she had dragged her sari, Hanumantha hill, Raghunatha temple… the list is endless.  The Vijayanagar kings also chose the site as their capital for this reason.
Dr Michell pointed out how temples until the 14th century were built mostly from granite, from this period on, the temple towers began to be built with bricks and mortar, which was much less stable than granite. The Vijayanagar kings built hundreds of temples in Hampi, of which perhaps only the Virupaksha and the Malyavanta Raghunatha temples survived the sacking and destruction in the 16th century, and continued to be places of worship. In terms of architectural and artistic achievement, however, the Vitthala temple and the Hazara Rama temple are the most magnificent.  In the latter temple, which was perhaps a private temple for the royals, exquisitely carved scenes from the Ramayana depict various episodes in 108 panels that go in a clockwise direction around the walls of the temple in 3 tiers.
The royal centre has the most wonderful monuments/ruins in a hybrid style, incorporating traditional Deccani and Dravidian styles together with Islamic architecture. The Vijayanagar kingdom was quite cosmopolitan and there were several Arab and Turkish/Central Asian soldiers and horse traders who perhaps, both served or travelled through the capital regularly, and many of the outer wall panels of the Mahanavami platform depict these.  There is even evidence of European soldiers, most likely Portuguese mercenaries, who must have served in the Vijayanagar armies. The stepped tank that was discovered in the mid-1980s by Indian archaeologists is also a marvellous example of Vijayanagar architecture and a product of great building ingenuity.
Dr Michell has made a prolific contribution to scholarship in India, and is regarded as an expert in Indian architecture. He is a graduate of the Faculty of Architecture, Building and Planning at Melbourne University, having received a Bachelor of Architecture degree in the early 1970s, and then obtaining a PhD in 1974 from the School of Oriental African Studies, University of London. Dr Michell’s recent publications include The Great Temple at Thanjavur: One Hundred Years, 1010-2010, with Indira Viswanathan Peterson and Bharath Ramamrutham (2010).