Gillard’s 457 rhetoric needs to tone down 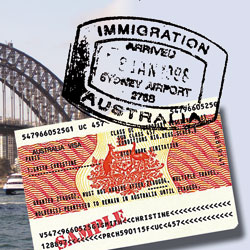 Since the beginning of this year, there has been increasing focus on why Australia needs to curb issuing 457 visas. Comments such as ‘Foreigners are taking Australian jobs’ and ‘There must be more jobs for Australian workers’ are being bandied about. It seems that this rhetoric is not only a class divide for votes by a desperate Gillard government but also benefits the factions in the union movement to whom Prime Minister Gillard is beholden. Most of the comments which have followed these assertions do not balance out. In fact, all they do is to feed in to the lowest common denominator in the masses. The Indian Australian community is more exposed to a backlash due to the events in the recent past with the student crises etc.
Let’s look at the facts. The number of 457 visas issued in 2003-‘04 was about 39,000 which grew to 110,000 in 2007 just as the Howard government left office. With the GFC hitting Australia, the number of 457 visas issued fell to 67,000 in 2009-‘10 but has recently grown to 125,070. According to recent statistics, there are about 140,000 baby boomers retiring every year and with the economy growing by about 1% every year, an additional 120,000 new jobs are being created. Anyone using simple mathematics can work out that there is a gap of 260,000 currently in the job sector, of which the majority are filled by local job applicants, with the rest of about 125,000 being filled by 457 visa holders.
Do note that 457 visas are issued to fill a gap in the skilled work place in the economy. If this was not undertaken, the flow-on effects to the rest of the economy will mean a contraction in growth of the economy and less job opportunities.
One of the highest nominated 457 visas in the last eleven months, are for cooks. About 1,930 visas were granted. As the cooks settle in to their new jobs, they help build up a whole host of related jobs – waiters, cleaning staff, counter staff, produce handlers, transport, delivery staff etc. The ripple effect of the job creation adds activity and wealth to the economy.
The IT sector which is much maligned by PM Gillard and her Labor colleagues is an area where a large number of Indian migrants are employed. That is because there are just not enough local skills available to meet the local demand.
According to figures released by the Australian Computer Society, it takes up to 247 days in the local market to fill a job position. In 2003, under the Howard government, there were 9,000 students studying in ICT fields; in 2010, under the Labor Rudd government with Julia Gillard as the Education minister, the student numbers had dropped to 4,293. This is at a time when 12,000 new jobs are being created, even last year in this sector. Rather than to malign this sector and the foreign workers employed in it, a large number of those who are Indians, perhaps there needs to be acknowledgement, and maybe even appreciation of their contribution to the local economy. But to expect this from a government which is a battering ram for the unions, pigs might fly earlier than this.
It is time for the true leaders in the Indian Australian community to step up to the plate, take issue with the Labor Party and tell them to tone down their rhetoric.