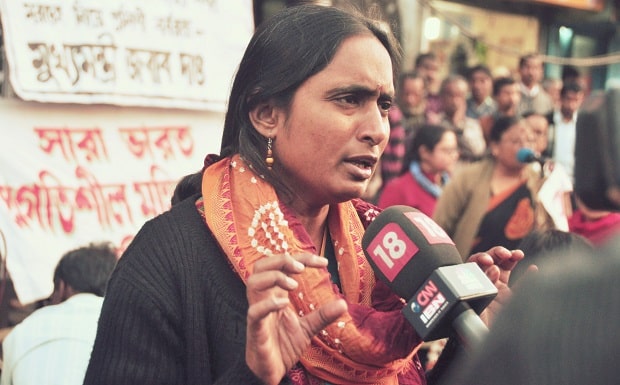 Reading Time: 4 minutesKavita Krishnan talks in Oz on leading the charge against sexual violence in India

Bekhauf Azaadi! Freedom without fear! This chant reverberated in the streets of Delhi following the horrific gang rape in 2012 that shook India. Politician and activist Kavita Krishnan was one of the first to join the movement. Soft spoken and unassuming, she is the secretary of the All India Progressive Women’s Association (AIPWA) and a member of the Communist Party of India (Marxist-Leninist) (CPI-ML). In 2013 she responded to the prevalent victim blaming culture and accusations of victims’ ‘adventurous’ behaviour with a fiery speech: “Women have EVERY right to be adventurous! And we WILL be adventurous! Don’t tell us how to dress, what time of night or day is safe, how many people need to escort us. We shouldn’t need to take measures to protect ourselves (from rape). We want freedom without fear. Bekhauf azaadi”. The speech went viral. Kavita Krishnan toured Australia in June on a speaking tour on the movement against sexual violence in India. Indian Link caught up with her in Melbourne.

She begins by explaining the movement and AIPWA’s involvement. “There was huge anger amongst people,” she says. “Everyone was demanding the death penalty. People were getting sexist rubbish from politicians and self-righteous stuff about rapists being put to death. But there was something new; slogans against victim blaming: ‘Don’t tell me how to dress, tell them how not to rape’. We felt we could deepen and expand this conversation”. Of her speech that went viral she says, “people were looking for something like that”.

“We need to keep working on it,” says Kavita of the momentum of the movement. “There is no room for complacence”. She cites Muzzafarnagar in Uttar Pradesh and Dharmapuri in Tamil Nadu where right wing political parties have mobilised support demanding that Hindu women be protected from Muslim men and upper caste women be protected from Dalit men. “This is a political attempt to turn the awakening last year on its head,” she rues, “so that we start imagining that instead of safeguarding women’s right to be free, we need to safeguard them from certain communities like Dalits and Muslims”.

On what we can expect from Narendra Modi’s government, Kavita states, “It’s early days yet. Instead of predicting, let’s see what the government does”. She makes three demands of the government, the first one is to acknowledge and criminalise marital rape. The second demand is to remove the impunity that the armed forces enjoy against rape complaints. Third, decriminalise homosexuality. She goes on to talk about the impunity that organised right wing groups have in limiting the freedom of young people, especially women.

“The Bajrang Dal, a Sangh Parivar outfit close to BJP, and their student body ABVP very regularly attack young people on Valentine’s Day and threaten that they will force them to tie Rakhis,” she says. She hopes the government will rein them in. “Modi can’t say ‘good times for Indians’ if they are not democratic times,” she reflects.

Democratic or not, Modi’s popularity is unquestionable. “People are very glib,” says Kavita matter of factly, “in saying that the Supreme Court SIT (Special Investigation Team) didn’t find him guilty. But we must ask questions. Why were the dead bodies from the Godhra train fire allowed by Modi to be displayed in the procession by the Vishva Hindu Parisad (VHP)? On the next day, why did Modi mention the Hindus that were killed, but not the Muslims? He told the SIT that his police officers didn’t tell him. So why didn’t Modi take action against these police officers?”

Krishnan also talks about the Modi government in Gujarat conducting illegal surveillance on a young woman. “Was it Modi who is referred to as the ‘Sahib’ in the Snopegate tapes?” demands Kavita. “We deserve to know, but instead we are pretending none of this matters; which is very dangerous for the country.”

About the BJP’s popularity amongst the Indian diaspora, Kavita ventures that Indians overseas do not see and experience the social change in India, and hang onto a textbook version of Indian and Hindu culture.

“They don’t realise that the freedom they enjoy here wouldn’t be available to them in say, BJP ruled Karnataka when the Shri Ram Sene was around,” Kavita says. “Women in Mangalore have been attacked going to work with a male friend. If they (Indians overseas) were living in India, their perspective would be different”.

Kavita’s activism against gender violence, caste and communal politics has attracted vicious trolling. She was threatened with rape on a live chat about gender violence. “It’s crazy!” she exclaims and explains that trolling isn’t limited to social media, it also happens on live television. Politician Subramanian Swamy said she stands for ‘free sex’ during a debate on national TV. “It took me a while to develop a thick skin,” she says.

About how she copes, she says, “I read a lot of detective fiction! Ian Rankin, Sara Peretsky, Kate Ross. I also listen to Hindustani and Carnatak music. I love the veena!”

I mention that I do a bit of Carnatak singing and her eyes light up. “Have you read T.M. Krishna?” she asks enthusiastically. “I’m reading his book about how Brahminism is pervasive in Carnatak music. I’m hooked!” she laughs. We talk a bit more about music and I promise to send her a link to a folk rock rendition of Tyagaraja’s ‘Bantureethi’ by a band called Agam. “I’d love that,” she says warmly. “And you read T.M. Krishna,” she says with a conspiratorial smile. “His writings should be mandatory for (privileged) Indians everywhere”.