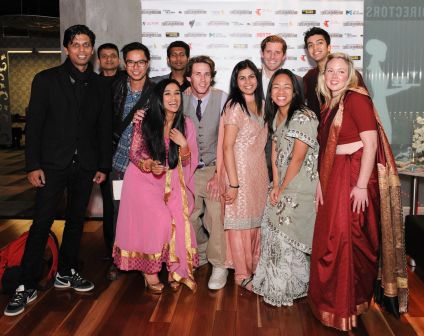 One century and a million milestones later, Indian cinema is not only surviving, but thriving. India clearly dominates the international film industry today in terms of the number of films made and the number of people watching them. The global emergence of Indian cinema has been gradual, but India’s unique cinematic approach is slowly but surely gaining a larger worldwide audience. Indian cinema was given space and attention on the international cinematic scene at the recently held Cannes film festival. Prominent amongst the slew of movies shown at this prestigious festival was the Indian film Bombay Talkies an anthology film consisting of four short films made by India’s most promising directors. Only a few days later Bombay Talkies also wrapped up the Indian Film Festival of Melbourne (IFFM).
“This year’s festival has been one of our most successful ones, with over 60 movies on offer at various locations like Hoyts Melbourne Central and Hoyts Chadstone, Federation Square and ACMI Cinema,” said Indian-origin film festival director Mitu Bhowmick-Lange. “We are delighted to present Bombay Talkies as our closing night special, made by four of India’s biggest directors as a tribute to 100 years of Indian cinema, making it the perfect film to wrap up our celebrations” said Mitu before the screening. She continued to thank the sponsors, partners, supporters and her team at Mind Blowing Films for their contribution towards the festival. Mitu also expressed her regret that the much anticipated visit of superstar Amitabh Bachchan was cancelled due to ‘several reasons’. “We were very disappointed that he could not be here to close the festival as planned; however, we hope that he is able to attend our festival next year,” she said.
In one of the four sections of the movie Bombay Talkies Director Anurag Kashyap tells a story about one man’s quest to meet Amitabh Bachchan to make him eat half a portion of murabba (candied fruit). The man spends several days in hunger and frustration just to fulfil his father’s wish to eat the other half of the murabba, eaten by Amitabh Bachchan, in order to live a longer life. The adulation and godlike reverence that the actor commands in India is depicted in this simple, but beautifully crafted tale. This story will resonate with the hundreds of Amitabh fans in Melbourne who were equally keen to meet the superstar, but were dejected when he cancelled his trip.
As a collaboration between Karan Johar, Zoya Akhtar, Dibankar Banerjee and Anurag Kashyap, Bombay Talkies is anything but a Bollywood romp. The four themes in the movie are representative of the urban middle class milieu told in a realistic style. Indian films have hitherto been classed either as exotica or an export of India’s poverty and downside. With increased budgets and an eye on the international market, the current crop of Indian filmmakers are creating a new wave of cinema that is being recognised for its artistic merit. Film festivals around the world have also started taking more interest in the cinema that pleases several million people. Closer to home, the IFFM mostly succeeded in showcasing the celluloid diversity and heterogeneity of Indian cinema. From curated classics to latest rom-coms and all sorts of interesting films in between, the festival was well received and offered cinephiles a lovely treat.