Cricket highlights and India's next plan of attack 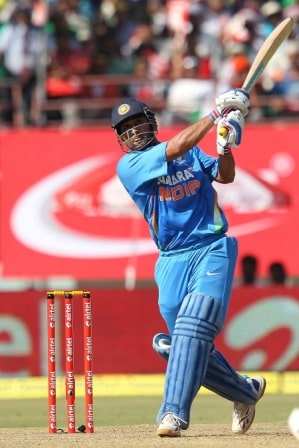 
With convincing victories in all four matches, the highlights for India were:
Dhoni’s 224 at Chennai
MS Dhoni’s unforgettable innings in Chennai set up India’s tour remarkably well – so much so that former Australian captain, Ian Chappell, is convinced it broke the backbone of the Aussies right from the outset. Honours between the two sides were even after two and a half days – India being 4-200 to Australia’s 380. But Dhoni left with the score at 9-572. Ashwin also cleaned up with 12 wickets.

Vijay and Pujara’s 370-run stand in Hyderabad
Although Murali Vijay and Cheteshwar Pujara scored the only half-centuries in India’s first innings at Hyderabad, they were big ones – the duo hit 167 and 204 respectively in the fourth-highest partnership ever for India. The Aussies were listless in the field, and clueless against the Indian attack. Honourable mentions: Jadeja (who twice took 3/33) and Bhuvneshwar Kumar for his fabulous spell with the new ball. India’s win, by an innings and 135 runs, was their second-largest against the Australians.

Shikhar Dhawan’s 187 at Mohali
Homework-Gate may have taken centre-stage before this match as Australia spectacularly dumped four players for not completing a team task by the specified deadline. But, with Virender Sehwag dropped from the side, Shikhar Dhawan made his debut his own. He negated the first-day washout by powering to 187 runs at a strike rate of 107 – the fastest century by a debutant in Test history. Bhuvneshwar Kumar once again produced a great spell of swing bowling to set up an easy chase.

Jadeja’s 5-for at Delhi
Michael Clarke, Shikhar Dhawan and Mitchell Starc were out injured for the dead rubber, but it was the most hardly-fought match of the series. Peter Siddle scored two determined half-centuries, top scoring for the Aussies in both innings, but Jadeja took care of the rest of the Australian order in the second innings, claiming a maiden five-for that drove India towards an unlikely victory after Lyon had run through the Indians with 7-94 in the first innings. Pujara stroked an unbeaten 82 on one leg, as he led India to its first ever 4-0 triumph.

The upcoming challenges
It’s easy to get carried away given how well India’s youngsters performed on this tour. And they deserve all the plaudits they receive, for Test cricket is never easy, and Australia don’t just give you victory, as much as it seemed that way on this tour. With the IPL having just kicked off, it’s time to start thinking about the shorter format of the game.

Champions Trophy, England/Wales, June 2013
The selectors have definitely taken note of how well the young guns played, with some surprising omissions from the list of 30 probables named in their Champions Trophy squad for June. Team stalwarts for much of the past decade, such as Virender Sehwag, Zaheer Khan and Harbhajan Singh, find themselves without a job as the selectors slowly begin moving away from the old guard. Already out of favour with Test selectors, the trio will be forced to question their future in the game.
More surprising than all of these omissions is the fact that Cheteshwar Pujara did not even make the list of 30 probables. Pujara tormented Australia and almost single-handedly stood up to England, and averages over 55 in List A matches as it is. He scores quicker than most in Test cricket and is an electric fielder – instead, Pujara will be leading an India A side in South Africa, clearly an indication that the selectors want Pujara to get used to the pace and bounce of the wickets over there ahead of the crucial series against the South Africans in December. You should always pick your best team for a tournament, however, and Pujara would walk into most ODI XIs in the world right now based on his domestic and international form.
Nevertheless, India may well be one of the favourites for the tournament, the infusion of youth mixed with the experience of the likes of Dhoni, Gambhir and Raina makes for an exciting combination. The only question will be whether the Indian spinners can stifle opposition batsmen in the unfamiliar conditions of England – and given the propensity of the Indian seamers to self-combust under pressure, this could well make or break India’s tournament.

India in South Africa, December 2013
It remains to be seen whether the likes of Vijay, Pujara, Dhawan and Jadeja are able to perform overseas with anywhere near the same impact as they can at home. India have a long wait until their next Test series, which takes place in December against the unchallenged world number one side, South Africa. Steyn, Philander and Morkel make for a far more threatening combination on juiced-up pitches, and this will be the real gauge of how much India have improved since their recent rough patch.
The batsmen might just get through unscathed, Pujara appears the most ready for South African conditions, with the ability to sway away from the short ones and produce a Dravid-like wall of forward defence. Meanwhile, Vijay has tightened up his technique significantly over the last two years, he can play the ball late, and has great balance when the ball is angled into his pads. On bouncy wickets, the challenge for Vijay will be moving forward as far as he needs to when he’s just seen a ball whiz past his face at 150 km/hr the previous ball.
The spinners, though, may well struggle on all the pitches except perhaps the slightly helpful Durban wicket – and MS Dhoni will need to have a long hard look at whether Jadeja’s struggle with the bat can be offset by his skill with the ball. An attack of Umesh Yadav, Bhuvneshwar Kumar, Ishant Sharma and Ravi Ashwin doesn’t look too menacing, though – India need to find some serious quicks, seriously quick.
For now though, India can be relieved, if not ecstatic at beating a weakened Australian outfit, they are back on track.
- Advertisement -
Share
WhatsApp
Facebook
Twitter
Linkedin
Previous articleIndian Link Mother of the Year Award
Next articleWalking ahead with a vision