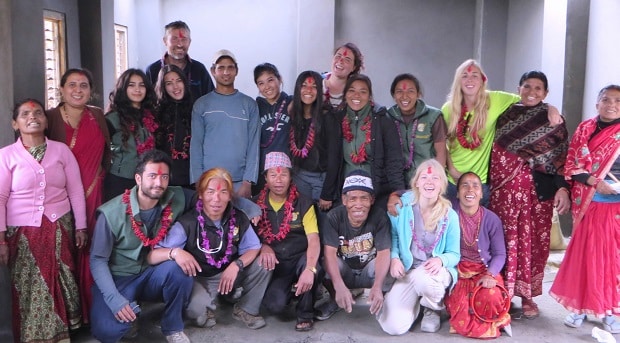 The University of Adelaide’s architectural students have beaten the Feds to the punch. The New Colombo Plan (NCP) was rolled out by the Federal Government in 2014. Its objective is to “lift knowledge of the Indo-Pacific in Australia and strengthen people-to-people and institutional relations”. India was not even to be considered until the wider roll-out in 2015.

Interestingly, the University of Adelaide’s School of Architecture decided to take the matter into their own hands by setting out an India project. Their ‘India Studio: Collaboration in Design’ mission was designed with overall aims remarkably in line with those of the NCP but with a narrower focus, and included a visit by their architecture students to India.

More recently, a different group of students has visited Nepal as part of their course, for a project to construct buildings for mothers’ groups on two different sites in the mountains north of Kathmandu.

The groups were led by Dr Amit Srivastava, lecturer in the School of Architecture. The India Studio project was developed in collaboration with Professor Rajat Ray of the Sushant School of Architecture in Delhi. The students also had the opportunity to visit Agra, Ahmedabad and Chandigarh.

The observations of the Adelaide students provide an interesting window into the lives of their peers in India, and Indian architecture in general.

Students with boundless energy need to be kept occupied, so one of the aims of the India Studio in Delhi was to work alongside local architecture students on a design project based in Delhi. The idea here was to come up with designs for the redevelopment of an old textile mill site in North Delhi.

This stroke of genius led to students getting to learn more about each other.

Adelaide student Jesse recalled, “Students at Sushant were enthusiastic and passionately opinionated. It was eye-opening to see the way in which they interacted during studio sessions, with great enthusiasm and sometimes brutal honesty”.

The visit to Chandigarh was one of the highlights of the Indian trip. As is well known, this northern city was created as part of first Prime Minister Jawaharlal Nehru’s grand vision for a modern India. It was a massive project especially for its time and came to symbolise hope for the future architectural landscape of India.

Adelaide students Lana and Marguerite saw Le Corbusier’s Chandigarh as an example of a large-scale project created by the masters that exemplifies modernistic tendencies without disengaging from the human scale.

Daniel’s reflection was somewhat different. “While planning a city can be incredibly important for the success and good-working of a city, it does not itself mean that the city is ‘successful’,” he noted. “Much of the quirky and culturally rich elements we saw in the other Indian cities, were not present in Chandigarh”.

He added, “The most beautiful part of Chandigarh… was the Rock Garden, where Indian culture, materials and artistry was on display”.

The students were also pleased to meet Nek Chand Saini, the creator of the famous Rock Garden.

It was not all work and no play. Any excuse will do to explore the Jantar Mantar in Delhi. The students enjoyed clambering all over the structures. Built by Maharaja Jai Singh of Jaipur, the site is a marvel of architectural and engineering design. Although it was built for the scientific pursuit of astronomy, it conjures up an image of almost being a plaything or a ‘folly’. Other places of interest visited included the Red Fort and Humayun’s Tomb in Delhi.

Cities in India have typically developed organically over long periods of time. Beset with the problems of a developing country, urban planning tends to display haphazard tendencies and this was reflected in the opinions of the students.

For instance, Jesse observed, “Many of the more recent developments and newer buildings in the large cities often seemed disconnected and lacked a thorough understanding or representation of the context”.

Daniel on the other hand, was impressed by the Akshardham Temple and the Lotus Temple in Delhi but felt that the buildings of Gurgaon “were the uninspiring soldiers standing to attention in rows… to accommodate more people in these individual, but too-familiar monoliths”.

What stood out for Lana and Marguerite were the “predominantly gated and often guarded” buildings, “creating little islands of modernistic architecture where the chaos of India seemed to pause”.

But the plains of India were a long way from the tranquil setting in the mountains of Nepal, which was the destination for the second group of architecture students from the University of Adelaide. The project to assist in the construction of two mothers’ group halls was undertaken with the NGOs Aussie Action Abroad and Architecture Without Frontiers. The 23 students were split into two groups; one travelled to the Khudi South site and the other to the Taal site. The project was to use simple techniques with local materials and mainly manual labour in the construction.

It was fascinating to hear the views of three students – Scott, Ashleigh and Charlotte – on their experiences in Nepal. Ashleigh mentioned that she “didn’t know what to expect” and so felt quite upset by the culture shock. All three were struck by the simplicity of the Nepalese people’s lives and their generosity.

There is always a risk that such ‘flying visits’ can be just for self-gratification of the visitors with no real benefit for the local population. But the responses dispelled this notion.

Firstly, in this case, the money being spent did go towards the benefit of the local community. Secondly, it helped the relationship, even if slightly, between Australia and Nepal.

In the bigger picture, what stands out as the most important benefit here, is that the visit by the students gave hope to the people they met. Finally, of course, is the practical aspect in that the halls are now being used by mothers and run by the local people themselves. The halls will be a lasting memory to the contribution of a handful of Adelaide students to the future lives of the Nepalese community.

Any visit to Nepal is incomplete without a diet of daal-bhat and a trek. So the two groups went on five-day organised treks accompanied by guides. The students also visited the historic city of Bhaktipur which they found quite fascinating. They noted the Roman-like influence in the construction through the wide use of bricks even on the roads.

The Nepal trip was brought to a close with a flourish, by means of an exhibition in May. This transported the colour, feel and atmosphere of the mountains and its people to Adelaide and showed glimpses of the work done by the students.

For the future, the School of Architecture is very likely to maintain its links with the sub-continent. When asked if they would go back to India and Nepal, the over-riding response was positive. Such visits help develop unique bonds. Something of oneself is left behind: a mark, a memory or a moment, in exchange for something taken, to be cherished or recalled in years to come.