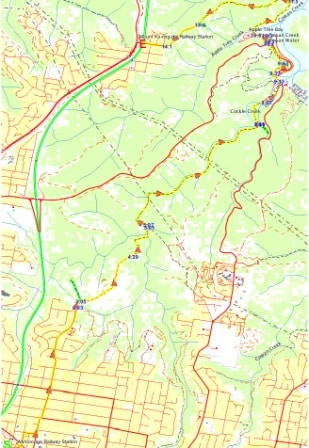 Reading Time: 5 minutesAttempting a 9km walk through varied terrain can be challenging but enjoyable, if you are well prepared, writes SUNNY CHERIAN

Bushwalking is serious business and needs adequate preparation and planning, with due importance for safety. You can’t just get up and go bushwalking with a bottle of water and a packet of biscuits. Here is my experience of a 9km walk that began from Berowra train station in the north of Sydney to Mt Kuring-gai station on the eastern side of the train line.
There is another walk on the western side of the train line which is part of the Great North Walk. This walk takes about six hours if you move at a leisurely pace, but nevertheless, it requires physical fitness. It may not be suitable for first time bushwalkers and small children.
My friend Wolfgang is an experienced bushwalker and, having lived in the area previously, he had completed this trail a number of times. We started off from Berowra Station at 9am, and set off into the bush. Initially it is a descent which is a reasonably steep, but not hard walk. At the bottom we crossed Waratah Creek, which was fortunately dry. There is a climb of about three feet from the creek bed to the next section of the track, which would not have been easy to cross if the creek had been filled with water, or if it was raining.
We passed green scenery and a rocky terrain, while the weather was pleasantly cool for a day which was forecast as being 27 to 30 degrees. We continued on until we reached Waratah Bay where the walk is on level ground, parallel to the water, and we soaked up the panorama of water views. A few small boats were moored at the bay, while others skimmed across the water. We took a snack break, enjoying a well-deserved rest after a long stretch of walking.
Now with renewed energy, we followed the winding track that led us to Lords Bay. This picturesque location was made even more beautiful as we saw a single anchored boat with people on board enjoying a relaxing day in the sun, or swimming in the clear greenish-blue water, covered in the mid-morning light.
Next up was Winson Bay, where we sat under the cool of the trees to enjoy a break. Natural seats are everywhere, as it is a very rocky area.
We walked on to No Name Bay, and considering that this was the most beautiful of the four bays we passed, it was perplexing to discover that it had no name! Amidst dense bush, we sat on rocks that were so cool, I had to check if I was sitting on something wet. We had a snack again, looking over a moored yacht, small boats and a lone man in a kayak on the water. The couple on the yacht got into their colourful kayaks and came ashore, stopping to have a quick chat with us. The water was shallow near the end of the bay, crystal clear and inviting, but having no towels or swimming suits, we had to forgo the pleasure of a dip.
Soon we began looking for the track that would lead towards Mt Kuring-gai, a mere fifteen minutes from No Name Bay. The signboard, which can be easily missed if you’re not on the lookout for it, indicated a distance of two and a half kilometres to Mt Kuring-gai station.
The climb was initially steep and lengthy interspersed with some level walks, which took an hour to cover as we took a break to rest and chat. In an exciting encounter, we came across a goanna of nearly a meter long from head to tail, which jumped into a tree and climbed high, on sighting us. Wolfgang reckoned that goannas are capable of mistaking humans for trees and they would even climb a person standing still to escape from danger. Not the best thought, given their sharp claws. We decided to get moving.
We finally reached our destination of Kuring-gai station at about 3pm, and were exalted at successfully completing the walk.

Bushwalking can be very relaxing but needs careful planning, as it involves risks. Based on your route, start the walk early in the morning, to avoid a steep climb in the hot afternoon. Leaving early also ensures plenty of time in case there are any mishaps that may delay you.
Don’t forget to inform your family, the police or national park authorities about the walk, location, route and expected time of return. Also, let them know once the walk is completed.
Bushwalk in groups of at least four, so if someone is injured or becomes ill, there are enough people to go for assistance, while others can stay with the person in distress. Ideally two should go for assistance and one should stay with the injured.
All the people in the group should stay together to avoid getting lost in the bush. A wrong turn can be detrimental. The leader stays in the front and the second-in-command brings up the rear.
Mobile phones may go out of range in the bush; however, emergency numbers have more range than normal numbers. Apart from 000, 112 is an emergency number to call from mobiles. Some mobile phones may allow the number to be dialled even with the keypad locked. Some may even allow a call without a SIM card in the phone. A Personal Location Beacon (PLB) is a good investment if walks are regularly undertaken. In a serious emergency, an activated PLB can transmit your location to search and rescue teams.
Always check the weather forecast for your route before setting out.

Risks on the trip
Snakes are to be expected when bushwalking, however walking along a well-trodden path may keep them away as they tend to pick up vibrations from the ground and seek shelter from intruders. Wearing thick, long pants, socks and boots will be helpful. Always be alert.
To avoid tripping and falling, a walking pole or stick may help. Tripping can happen even if you are being careful.
It is possible to become disorientated, so a detailed map and compass is vital. A battery operated GPS will be helpful too.

What to pack
Carrying a sensible load in a backpack is always helpful when walking in the bush.
Take a raincoat, wide brimmed hat, map for the area, water, food, sunscreen, first aid kit, GPS, Personal Location Beacon (PLB), a small torch, spare batteries for the GPS and torch. Wear a long sleeved shirt and pants and comfortable walking shoes.
When the walk is long, it is best to travel as light as possible. However, do not restrict water, as towards the end of the walk, it can always be poured out.
Wear comfortable clothes in layers so that you can add or take them off, depending on the weather.

Additional information
You can find more tips at: http://www.nationalparks.nsw.gov.au/safety/bushwalking
http://www.police.nsw.gov.au/community_issues/crime_prevention/trek