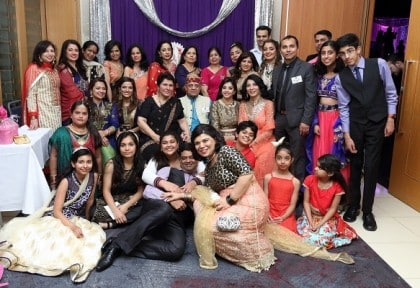 The Northshore Deepavali Milan brought families together to spread joy among the community. KIRAN JASSAL reports

There is something magical about Deepavali that summons fond childhood memories and makes us eager to honour its traditions as adults. Today, celebrating Deepavali has special importance and cultural significance not only for Indians, but it also holds symbolic meaning for everyone around the world. Australians like to call it the ‘Festival of Lights’ and hold its message about the triumph of good over evil in high esteem.

The annual festival of Deepavali was celebrated in a grand fashion on 29 October at the Hornsby RSL Club. The Northshore Deepavali Milan, in its eighth year, was again an outstanding success. Under the inspiring and expert guidance of Mrs Kamini Sahni, a group of young women banded together to volunteer their time and energy to this event. Niti Bajaj, Dr Shibani Sahni Patel, Dr Anupriya Singh, Punam Wahan and Sushma Segal certainly outdid themselves to produce a fun-filled family-friendly event for over 400 guests.

The excited families, dressed for the occasion in beautiful Indian attire, filled the resplendent hall, creatively decorated by Niti Bajaj and Neeta Tanna. The event catered to families of all ages with special emphasis on children celebrating Deepavali with henna, a photo booth and disco dance.
The celebrations commenced with aarti that was led by Lt Col (retd) VK Sahni and Mrs Kamini Sahni, and joined by the organising team. This was then followed by a mesmerising dance by Deepa Arora. There were informative presentations by Namita from the PKS Foundation, about rare chromosomal disorder Pallister-Killian Syndrome, as well as Nikhlesh on his charitable project in India.

The kids made the event exceptional. They put on a short skit and also starred in video interviews on what Diwali means to them. According to the children, Deepavali marks the homecoming of Lord Rama after vanquishing the demon king Ravana. Some kids remarked that it was all about sweets, crackers, dazzling lights and new clothes. A few older children were of the view that Deepavali is an occasion to go all out with rich, decadent dishes like fragrant biryani studded with cashew nuts and almonds. Some said Deepavali is about meeting and greeting, whereas others remarked that the festival is about sharing and caring.

Continuing the celebration, the guests were also treated to an energetic bhangra dance. Special thanks to all the kids and their parents for supporting this event. The participating kids included Aditya and Khushi Arora, Avishi Bahl, Saavar and Sana Bajaj, Nikhlesh and Leysha Belulkar, Anish and Joyce Sharma, Sienna and Shivona Kapoor, Sean Kaushal, Saira Kharbanda, Lara Kumar, Aaron Mistry, Shay and Tarini Patel, Kireth and Simran Sandhu, Sejay Segal, Jeevan and Neerav Sekhon, Ahan Sharma, Muskaan and Rishi Sidhu, Ronit and Rohan Wahan. The children were awarded with certificates and gifts handed out to them by Julian Leeser, Member for Berowra and Councillor Gurdeep Singh.

The Master of Ceremony duties were expertly conducted by Nitin Madan and Sanghmitra. There was a display of fantastic and extravagant Bollywood beats by The Mystiq Dance Group. The audience then joined in the fun by learning all their favourite moves. Professional photographs were provided by Evergreen Memories and a photo booth was kindly donated by Akshay Punwani. Fathers and sons were cheered and applauded when they showcased their runway style and high fashion.

The raffle was dutifully and diligently handled by Malini Mistry and Supriya Segal and prizes donated by the organising team, Indian Link, Art Karat and Tuli Jewellers. To burn off the scrumptious three-course meal, guests celebrated on the dance floor to the music of DJ Bali.
In the spirit of bringing light where there is darkness, all the money generated from the raffle and proceeds from event ticket sales, was donated to PKS Australia.
The joy on the children’s faces on the night will keep burning bright until the anticipated 2017 Northshore Deepavali Milan.