Stories from around the world 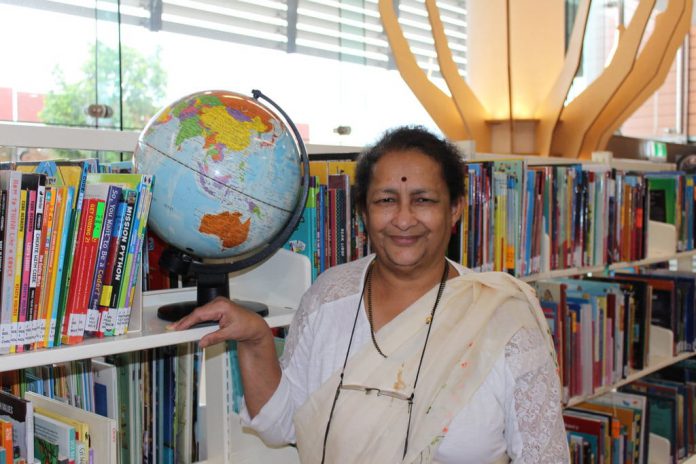 When Kiran Shirodkar was a young girl, her favourite story was one her grandmother told her. It was about a princess who had to travel through a jungle alone, and to protect herself from the lurking dangers, she took refuge inside a giant pumpkin.

Today as a grandmother, it is a tale she has told not only her four young grandchildren, but many other kids in her large community.

As a storyteller in Blacktown City Libraries, Kiran presents ‘Stories From Around The World’ every week for pre-schoolers and their parents.

“The sessions have been presented for some ten years now,” Kiran described to Indian Link. “They are aimed at kids under five, and their parents or carers are invited to join in as well.”

In recent months, Kiran’s storytime has had a much wider reach, no thanks to COVID-19 lockdown.

The twice-weekly sessions have gone live on Facebook, reaching kids at their own homes as they self-isolate with their families.

“I’ve been a library technician for nearly 50 years now, so you can understand I have a great passion for stories,” Kiran, a Mumbai girl, revealed. “I started ‘Stories From Around the World’ with European folk tales and fairy-tales, and after a while I felt we needed to diversify.”

The story-telling hour typically begins with a massive globe that is rotated and stopped at a certain country. This week’s stop was Mongolia, and Kiran had a local Mongolian personality as a guest to help tell a story from his culture.

“I keep the stories short and interactive, as the little ones have brief attention spans,” she disclosed. “I make sure the stories are non-historical and non-religious; I don’t want to offend anyone.”

Puppets and props come in handy, such as dolls and animals from the relevant culture that the kids can touch and feel so that interest is maintained. (This week’s items came from Mongolia, and included camels, traditional water flasks, and models of traditional homes).

The audience are encouraged to clap, sing along, and make animal noises.

Of course, Kiran adds to the enjoyment of it all with her penchant for making sounds herself – such as the whooshing of wind and the bubbling of water.

“Plenty of research went into the story-telling in the early days, as there were few books available,” she reminisced. “But we continue to innovate today, such as with Facebook Live! The entire recording now is done in one take.”

Looks like Kiran will continue to move with the times, given her new ideas for the future.

“I’d like to pitch to older kids, perhaps in the 5-8 years category,” she mused. “Thinking of making the stories a bit more complex, with riddles maybe, and some craft.”

Listen to ‘Stories From Around The World’ on Blacktown City Libraries Facebook page, 10.00am on Thursdays and Fridays.