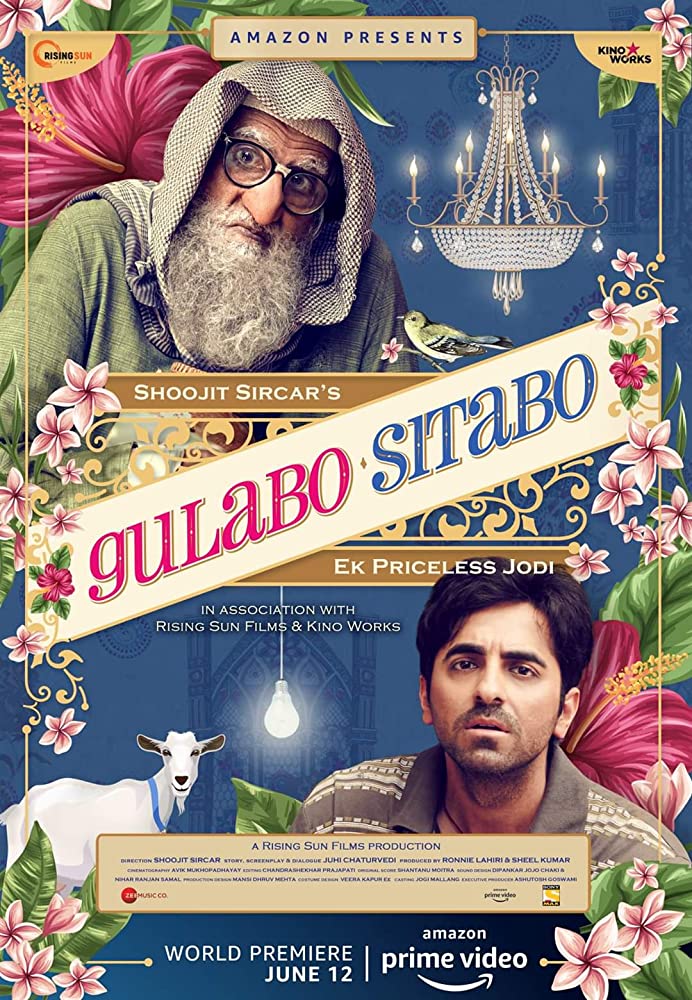 First thing, “Gulabo Sitabo” is positioned as a comedy but the film would not fulfil definition of the genre in the traditional Bollywood sense. This is not first day-first show LOL stuff, and it would seem a prudent move to launch this refined whiff on OTT.

This film is not solely about Amitabh Bachchan and Ayushmann Khurrana, either. To savour “Gulabi Sitabo” you need to understand that the film is as much about the quirks of Lakhnavi life. Importantly, a third significant character here is the decrepit ‘haveli’ (mansion), Fatima Mahal, which the tale is centred on and which becomes a silent protagonist for the bittersweet dramedy to unfold.

To appreciate the satire element the film tries putting across, one needs to understand the co-relation between its three protagonists — the two heroes and Fatima Mahal — in the context of the title. Gulabo-Sitabo are traditional glove puppets of Uttar Pradesh. Sitabo is the overworked spouse while and Gulabo the smart paramour who mostly knows how to get her way for nothing.

In the film, Amitabh Bachchan is cast as the haggard old Mirza, obsessed about shielding his mansion from a series of people who have a shark’s gaze on the sprawling but crumbling property. Ayushmann Khurrana is Bankey, one of Mirza’s tenants who has not paid rent (a princely sum of Rs 30) for months.

Without giving away spoilers, things come to a pass between the ever-bickering Mirza and Bankey that both end up trying to make some fast fortune off the ‘haveli’.

Juhi Chaturvedi’s script is pitched as a modernday morality play of sorts. It is about avarice, and it oscillates between hope and despair, laughter and misery, to drive home the message that good, in the end, will triumph — much to the inconvenience of both Mirza and Bankey in this case.

Despite a fascinating core concept, writing is not the best aspect of the film. Somehow, director Shoojit Sircar needs to fall back on his performers, as well as the milieu in which the story unfolds (Fatima Mahal as well as Lucknow city are admirably brought alive by Avik Mukhopadhyay’s camera). Also, while Chaturvedi struggles to maintain pace of narrative, she excels with the dialogues, impressively sustaining the screenplay with lines that revel in the witty ‘mizaaz’ of Lucknow.

Clearly Sircar, a proven storyteller, was trying to narrate a storyline that works in layers, as “Piku” did. As a very basic entertainer that is where “Gulabo Sitabo” fumbles, when compared to “Piku”. Sircar’s latest sets up its humour quotient using understated humour that would not cater to all. Dig deeper, though, and you might just relish the film as a consummate satire – at an individual as well as a societal level.

To relish that fine comedy, you also need to understand the oddities of Lakhnavi lingo. Which leaves you somewhat bemused because they decided to provide subtitles in 15 languages. “Gulabo Sitabo” is not a film that can be enjoyed with Spanish, German, even English subtitles. Stick to watching it in the Hindi/Urdu original version, or skip it altogether.

You would, of course, go for it drawn by the film’s lead cast more than its layered humour or language specifics. Amitabh Bachchan and Ayushmann Khurrana are the obvious draws, setting up an engaging equation of conflict.

Bachchan’s heavy prosthetics may not be something that would floor you in any away, but the veteran makes up for the bizarre makeover with flawless body language to define Mirza — an old man weighed down by age who would draw your sympathy at the first glance, only to incite aversion the moment you fathom his unabashed greed. Despite the grey shades inherent in Mirza’s character, which begin to show as the narrative progresses, Bachchan is an absolutely remarkable watch.

It must have been a mammoth task for Ayushmann Khurrana to stand up to such a formidable act but the new-generation star simply brings out his best. He lives out the atta chakkiwaala Bankey only too authentically, down to a heartland accent highlighted by a lisp, and supplemented by the right physical attributes.

Yet, “Gulabo Sitabo” is not just about its two lead actors. Vijay Raaz as the arrogant archaeological officer is comically evil. Brijendra Kala adds exceptionally to the plot with his wily lawyer act. Srishti Shrivastava as Bankey’s sister Guddo has to be the find of the film. If you missed noting her as Albina in “Gully Boy”, chances are you won’t forget her in a rush after “Gulabo Sitabo”.

Finally, you have Farrukh Jafar as Fatima Begum, Mirza’s wife and the cleverly underplayed ‘hero’ of the film. She personifies of the voiceless Fatma Mahal and, almost on cue perhaps, speaks very little all through. Few actors in recent times have exuded such complete screen presence through sheer silence as the 80-plus veteran does in this film.