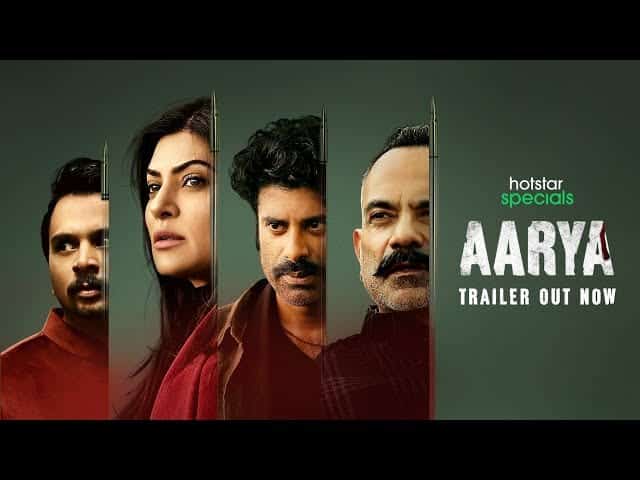 Aarya starts off with a couple of advantages. It marks the return of Sushmita Sen, a fact that has helped the show pump up hype over the past weeks. Secondly, there proven core content at hand. The show is based on the Dutch series Penoza, which saw a whopping run of five seasons, and which has already inspired an American rehash, Red Widow.

Both the advantages, however, come with a catch. There was always the challenge of moulding the uber-glamour of Sushmita Sen – still India’s first Miss Universe in the minds of most – into a protagonist that fits the scope of a web series (it is a challenge that her Bollywood directors mostly never tried tackling, which often saw her essay the ‘other heroine’ in two-heroine projects).

On the second aspect, what worked in Dutch may not necessarily work for a ‘desi’ revisit.

It’s obvious right from the start that writer-creator Ram Madhvani’s primary labour over nine episodes lay in setting up a saleable, author-backed showcase to highlight the Sushmita factor, with his Indianised imported plot.

Sushmita is Aarya Sareen, alpha mother of three, and she is hanging upside down defying gravity, executing a complex inversion workout, when we first meet her. The scene is perhaps symbolic, meant to tell us how ‘in control’ she can be, when her world turns upside down. Which doesn’t take long to happen actually. Beneath the veneer of a happy family, where Aarya wants to give her kids a normal childhood, we soon learn the Sareens are not ‘normal’ people. The regal lifestyle owes itself to dealings more than meet the eye.

Aarya’s husband Tej (Chandrachur Singh) and his partners are drug mafia, running their trade under the garb of a pharmaceutical business.

The tele-play aims at building its storyline gradually over the episodes – only too gradually you would think, after the opening episode gives the show a dramatic plot-pusher, not to be revealed for the sake of shielding spoilers. That momentum, however, gets squandered as Madhvani’s narrative tries accommodating too many sub-plots for too many characters. The average runtime of each of the nine episodes ranges from around 45 to 55 minutes. You wish Madhvani and his co-directors (Sandeep Modi and Vinod Rawat) had stuck to the point, restricting the show to, may be, five episodes of 30 minutes each with sharper editing.

Pace is not the only problem. Despite basing its narrative on something as promising as a thriller about drug running and the deceptions that come in its wake, Aarya cannot boast of many authentic moments that thrill.

The most disappointing aspect is what the entire series ultimately decides to settle upon, for a ‘storyline’. Without giving away the plot, for all its intriguing premise, this is a hackneyed story about cops and mafia gunning for a USB stick that contains – ahem – secrets that could bring down the drug empire. It reminds you of those B-flicks of yore. Back then, they would all be chasing a little black diary of ‘kachha-chittha’. Nowadays it seems bad guys keep their black deeds documented in black pen drives.

From trailer and previews, you would have the broad idea that circumstances will force the home-maker Aarya to take over her husband’s trade. Yet, when that momentous event does happen, there is absolutely no spark – save the bit of shimmy swag that Sushmita exudes as she makes her way to her husband’s chair, backgrounded by retro Bollywood score.

In fact, that nutshells the whole show. It is a lazy drama propped by Sushmita’s screen presence in particular, as well as rest of the cast. Fans of Sushmita won’t be disappointed, though. After a decade of absence from the Bollywood screen (five years if you consider she did a brilliant Bengali arthouse film called Nirbaak in between), the actress returns to prove that she has lost none of her edge. Be it as the doting mom or the cold avenger, Sushmita’s Aarya Sareen is a balanced and believable act.

Two other actors who particularly stand out are Jayant Kripalani and Maya Sarao. Kripalani, who also returns on screen after a hiatus, is Aarya’s father Zorawar, with a deceptively pleasant disposition that he pulls off effortlessly. Maya Sarao is Maya, Aarya’s close friend and the wife of one of Tej’s partners, Jawahar (Namit Das). Although Maya is really a secondary character, she gets her moments, letting Sarao score.

Most of the others in the cast are adequate.

Aarya leaves open the scope for an obvious season two going by its final scene. For a few thrills more, we will hope Madhvani and company serve it headier the next time.