It's a fun film to watch, as long as you're okay with the odd cuss-tinted gag or innuendo, writes VINAYAK CHAKRAVORTY. 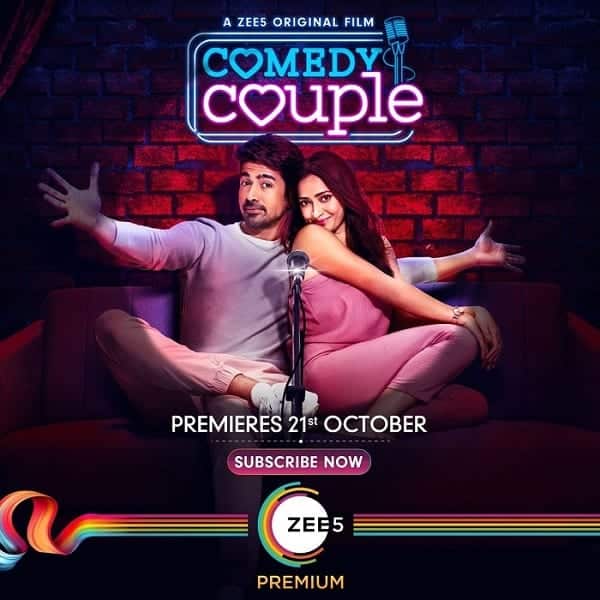 In Comedy Couple, a dash of gender politics and a tall glass of gau-mutra are on the gag menu here with a sizeable helping of stand-up gigs plus the usual chaos over generation gap. You get a rom-com that regales, although without trying to explore the genre beyond familiar terrain. It works for its freshness in storytelling more than the story it tells.

Comedy Couple is likeable for characters that draw instant attention and quirky situational humour. To his credit, director Nachiket Samant manages to avoid being soppy while narrating the mandatory emotional moments.

Saqib Saleem and Shweta Basu Prasad strike impressive chemistry as Deep and Zoya, live-in couple who also collaborate as comedians on stage. Their sets are a hit and they dream of being India’s first ever stand-up comedy couple.

The going’s good at work but there are problems elsewhere. Living together is a hassle in Gurgaon where societies, it seems, won’t rent flats to unmarried couples. On stage, a gau-mutra joke they habitually crack draws hardliner ire for Deep, and the insane outcome is (literally) more than he can swallow.

Worse, there are the parents. Deep Sharma is a smalltown guy romancing big city girl Zoya Batra, and the socio-cultural gap is neatly brought out using the parents. Zoya’s bohemian single mother (Pooja Bedi), sketching nudes in faraway Paris, never lets go of half a chance to take a jibe or two at her relationship with Deep. On his part, Deep wouldn’t dare reveal to his smalltowner father (Rajesh Tailang) that he quit his IT job to pursue stand-up, or the fact that he lives together with Zoya. Things get complicated when Deep’s parents come over.

Bikas Ranjan Mishra’s story gets an irreverent yet authentic edge in screenplay and dialogues (Raghav Raj Kakker and Kashyap Kapoor). The overall mood of the film is of an extended stand-up show, which is not a bad idea since Deep and Zoya draw most of their material from the reality they face in the normal course of their day.

Comedy Couple avoids getting too complex with the emotional bonds Deep and Zoya share with their parents or as a couple. The uncomfortable (albeit inevitable) matter of ego clash that arises between a couple in the same profession (think Abhimaan or Aashiqui 2) is also dealt with all too casually — and is there in the story mainly to act as a device to generate random humour.

We are to understand, of course, that the intent of this films was always to cater breezy fun rather than introspect. The narrative fashions humour out of everyday situations, and mostly without being flippant about it.

It’s all good fun while it runs, enriched by excellent acting. Comedy Couple strikes a winning combo in Saqib and Shweta as a lead pair that maximises the scope their well-penned characters offer, but others in the cast strike stellar form, too. Aadar Malik as Deep’s perennially stoned buddy Rohan is hilarious without overdoing the act, and Pooja Bedi plays out her spirited mom role well. Rajesh Tailang takes a pleasant departure from the heavy roles we normally see him in. As Deep’s father, he conveys smalltown conservatism effectively without reducing the prototype to a caricature.

The film is worth a watch if you are looking for a couple of merry hours, as long as you’re okay with the odd cuss-tinted gag or innuendo.