On the complex symbolism and mystique of the Aarati 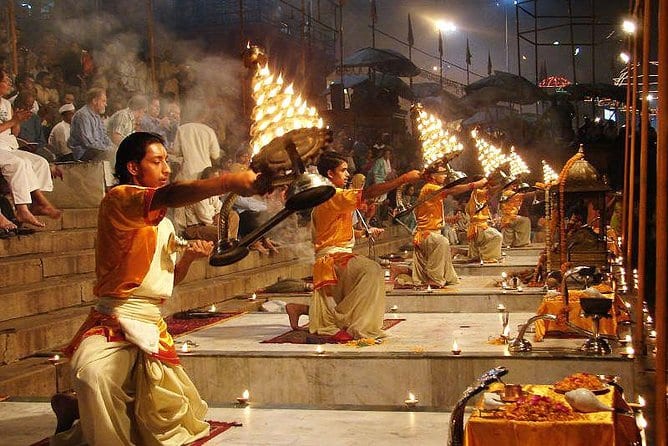 Among the numerous Hindu rituals there is perhaps none more well-known than the aarati ceremony, be it at the temple or for the personal deity (ishta devtha) at home. It is the high point of any visit to the temple. As the learned priest concludes the puja, he lights a piece of fragrant camphor (or even a lamp as is the preferred option nowadays) and takes it around to all the gathered devotees, individually blessing them. These simple steps are pregnant with meaning and complex symbolism.

The word aarati (Sanskrit) literally means “before night.” Ratri (night) when prefaced with the letter a indicates dusk. The waving of the lamp before the deity implies the dispelling of the night of our material sojourn with the light of devotion through which God is revealed.

The origin and significance of this colourful ritual speaks of its inner charm and potential to dispel all fear arising from the ignorance of material identification.

During aarati, the officiating priest waves the aarati plate over the image of the deity, (creating the pattern of the Om). In doing so, the plate itself is said to acquire the radiance and the power of the deity. He then takes the plate around to all those present as prasada. As the devotee touches the flame with his palms and raises it to his eyes and forehead, it is believed that the purificatory blessing, passed from the deity’s image to the flame, has now been passed to the devotee.

The world that we live in is an admixture of five rudimentary (subtle) elements (Panchabhutas) generated by the one Reality (Brahman) that exists, even beyond the realm of the five senses).

The five Mahabhuthas are Akasa (sky), Vaayu (air), Teja (fire), Jala or Apa (water) and Prithivi (Earth) and are represented during worship through flowers, incense, deepam, neiyvedhya and gandha.

Man is endowed with five sensory organs know as the Gnaanedriyas, consisting of ear, skin, eye, tongue and nose. These are related to the Mahabhuthas and have the corresponding functions of perception namely, hearing, touch, sight, taste and smell (sabda, sparsha, rupa, rasa and gandha).

Chanting Om at the beginning of all prayers creates sound (sabdha), which signifies Akasa. Om is the Pranavaantra that stands for Brahman. Dhupam or incense represents Vaayu. Vaayu transmits sound so it can be felt. Deepam or Agni can be felt and seen. Water is an indispensable part of worship and holy water consumed after worship signifies taste. Sandalwood paste provides the smell.

The Bhagvad Gita too refers to these eight aspects in great detail.

These material elements, five gross and three subtle, cover our soul. Corresponding with the gross material elements are the senses and sense organs, which make up our physical dimension, while mind, intelligence, and material ego make up our psychic dimension. Under all of this we reside, like an uncut diamond. Although our consciousness is covered by a mountain of material misconception, its potential to shine, it is often believed, remains undiminished. Rituals such as aarati are intended to remove the mountain of our misconception, as well as shed light on our positive potential.

During the aarati, the devotee offers himself to God. By doing so, he removes ahankaara, the material ego.

“I am not a brahmana or a ksatriya; nor vaisya or sudra. Nor am I a brahmacari, a householder, a vanaprastha, or a sannyasi. I identify myself only as the servant at the lotus feet of Lord Sri Krishna. He is like an ocean of nectar, and he is the cause of universal transcendental bliss. He is always existing with brilliance.” (Padyavali 74)

In the traditional aarati ceremony, the priest offers these items with the right hand, while ringing a bell with his left hand. The sweet aroma of pungent incense pervades the room, lights are dimmed, and gongs, bells, drums, and cymbals reverberate.

During the aarati, three levels of purity are necessary. The articles offered must be pure, dravya-suddhi. The offering procedure must be pure, kriya-suddhi. And finally, the consciousness of the offerer must be pure, bhava-suddhi.

The brahma-muhurta, beginning an hour and a half before sunrise, is the most spiritually auspicious time of day. The first and foremost aarati of the day, mangala-aarati, is performed during this time period. Any devotional activities performed during this time are greatly enhanced in terms of their spiritual potency and benefits. It is the pujaris good fortune to awaken the deities by the melodious recitation of auspicious verses. The Sandhya-aarati takes place at twilight, the sandhi or joining of day and night, just after the evening offering of food. This is perhaps the most festive aarati.

Aarati is performed for a number of other auspicious occasions – welcoming the newly married bride and groom as they embark on life’s journey together or newly born child, beginning a new venture, a fresh new harvest etc.