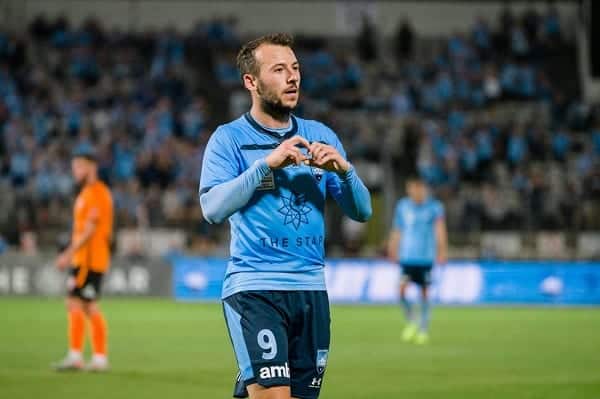 Mumbai City FC has announced the signing of striker Adam le Fondre on a season-long loan from A-League side Sydney FC. The 33-year-old Englishman joins the Islanders ahead of the 2020-21 Indian Super League season.

“This is a new adventure in my footballing journey. The ISL is one of the fastest-growing divisions in the world right now and Mumbai City has the vision and the ambition to be a leading club not only in India, but in Asia,” le Fondre said in a statement.

In 2018, he joined A League’s Sydney FC and has enjoyed tremendous success in Australia since then, leading Sydney toward two Grand Final wins and one Premiers in two seasons, netting 45 goals and 4 assists in 67 appearances.

Born and raised in Stockport, Greater Manchester, le Fondre came through the ranks at Stockport County in 2004. A loan spell at Rochdale in 2007 was made permanent where Le Fondre would go on to spend two seasons. A move to Rotherham United followed before he made the switch to Reading in 2011.

In 14 seasons in English football, Le Fondre has scored 183 goals and made 44 assists in 532 appearances.

With 228 goals, he sits in 6th place in the list of English goal-scorers in the 21st century.

“Adam is the kind of player any coach would want on his side. We believe he can have a huge impact on our season and more importantly, can be a great mentor and a role-model to our youngsters,” head coach Sergio Lobera said.

le Fondre’s move signals additional recognition of the Indian Super League as a growing hub of football talent in South Asia. Most recently, the ISL was inducted into the prestigious World Leagues Forum (WLF), joining the likes of the Premier League, LaLiga and Bundesliga, and becoming the first South Asian football league to join the association.

READ ALSO: When an Indian football star isolates in Sydney

Rohit Sharma an obvious choice as captain after Virat Kohli

Dhoni joins team India as a mentor for T20 WC