6 Mira Nair films you must watch 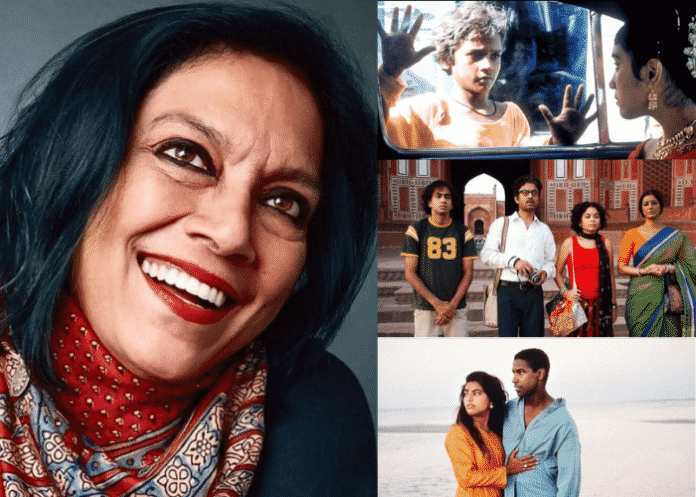 Mira Nair is an Indian-American filmmaker who is lauded worldwide for her deeply moving films and her powerful yet delicate portrayals of Indians and Indian issues of love, family and identity among other poignant stories.

Her newest series “A Suitable Boy” is set to release on 23 October on Netflix, but while you wait, here is a curated list of Mira Nair films you must watch!

Young Krishna is abandoned at a circus by his mother as punishment for trashing his brother’s bicycle. She warns him that he cannot return home without earning at least 500 rupees. Left behind by the circus, he takes a train to Bombay. He then becomes one of the children living on the streets of Bombay whose story involves encounters with slum dwellers, drug dealers, sex workers and hawkers. A film like this forces you to experience hardships through a child’s lens, a child whose only goal is to make enough money to return home.

The story revolves around the interracial couple overcoming upsetting challenges in order to be together. A strong yet beautiful treatment of interracial love, and in the early 90s no less. This film is also a tale of community and acceptance.

The Verma household is hustling and bustling because they’re preparing for the wedding of their laadli Aditi and an NRI. The preparations are grandiose, chaotic and expensive just like the plot of this film. In true Indian fashion, multiple generations of the family, their friends, and distant relatives bring much baggage to the festive environment.

But behind closed doors, there is more drama brewing between the younger members of the wedding party, including the bride. The storytelling labelled by many as ‘ahead of its time’ addresses issues like adultery, child abuse and romance in various classes of society. Without revealing too much, let’s just say – with the beginning of the Monsoon season the Verma family celebrates without too much rain on their parade.

The film won the Golden Lion at the Venice Film Festival.

Nair adapts Jhumpa Lahiri’s super relatable novel for film, featuring prominent actors like Irrfan Khan, Tabu and Kal Penn. The film revolves around an immigrant couple settled in the United States and their son who struggles to embrace his Indian name and heritage.

The film brings up and juxtaposes Indian arranged marriages and American practices of love and dating. Nuances of assimilation, identity and minority representation are all continuously co-mingling throughout the film. A must-watch Mira Nair film for the Indian diaspora.

READ ALSO: Indian shows and movies to binge-watch this October

Nair’s latest political thriller is another film adaptation of a novel by Mohsin Hamid. The story surrounds Changez Khan, a young Pakistani man played by Riz Ahmed, and how the aftermath of the 9/11 tragedy opens the floodgates of prejudice against him.

Changez is a man trying to achieve the American dream but faces problems because of heritage. He is hunted down by authorities and is the prime suspect in a kidnapping. Following which, his American-ness and patriotism are constantly questioned. The Reluctant Fundamentalist is an important film that highlights the immense discrimination faced by Muslims in America, set off by the events that took place on 11 September 2001.

Mira Nair was even awarded The Bridge for making this film, a German Film award for peace presented to artists whose work builds bridges that encourage tolerance and humanitarianism.

A biographical drama depicting the life of Phiona Mutesi, a world-famous Ugandan chess player. Her role is played by Madina Nalwanga and talented Lupita Nyongo plays her mother, Nakku.

The film begins in the slums of Uganda’s capital city, Katwe where we see young Phiona’s daily struggles of caring for her family while making ends meet. One day, she comes across Robert Katende who coaches kids in soccer and chess at a community centre. Immediately, life takes a turn when curious Phiona becomes the best chess player at the centre.

Follow her as she tries to achieve her dreams of becoming a Grand Master and finally, buying a home for her family. This heartfelt story is so wonderfully portrayed by Mira Nair, it definitely qualifies as one of her most inspiring films.