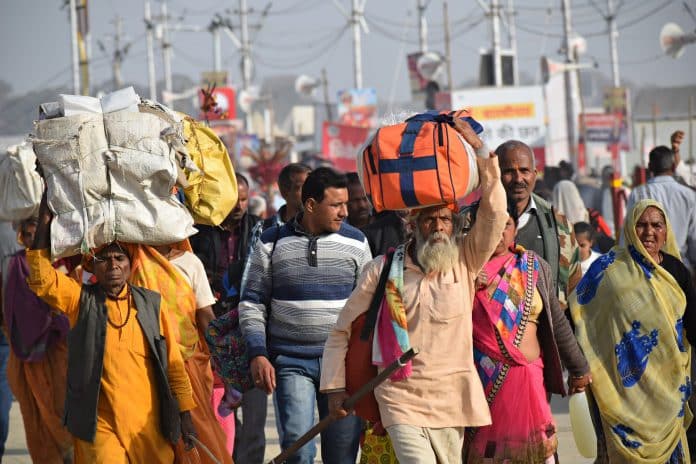 The largest mass migrations in South Asia since the time of partition are taking place in India during the COVID-19 pandemic. Indians are on the move in every direction from the major urban centres, criss-crossing the nation on their way homeward to towns and villages across the country.

With the national transport systems initially shut down and now just jammed full, these people are walking, hitching truck rides on highways, and sleeping on roadsides in the blazing summer heat. They depend mostly on spontaneous generosity, good luck in bad times, begging, patchy support from the police and willpower born of despair.

Individual stories have emerged to personalise this theatre of national displacement. The dead body of a young mother lying on the platform, as her infant son tugs at her clothing to awaken her. The man, sobbing and exhausted on the roadside, struggling to get home. The grit of an adolescent girl who cycled over 1,000 miles to get her ailing father and luggage back home from Delhi.

These personal stories raise ordinary folk into heroes, but doing so also hides some fundamental issues about the rights and protection for people on the move.

In the international legal and political frameworks that address the needs of migrants, the internally displaced often disappear from view. This is because of the extraordinary paradox of being both a citizen of a country and a migrant within it at the same time.

In the context of COVID-19, India’s “citizen-migrants” can find protection from few national protocols that address their specific needs. Yet India is a signatory to both the UN’s 2030 Sustainable Development Goals, promising dignity to all, as well as to the Global Compact for Safe, Orderly and Regular Migration, adopted in 2018 through a complex process which I was involved in coordinating. These are commitments that tie the Indian government to safeguarding the human rights of citizens and non-citizens alike. But it is not doing so.

India’s migrants form the great underbelly of its urban sprawls. They are the street vendors, the construction workers, the domestic workers, the gardeners, cooks, and daily labourers who keep urban life ticking. They are also the breadwinners for rural and small-town India, who remit money back to sustain the larger family, educate siblings or maintain the elders. Without formal or permanent work contracts, their lives and livelihoods were already precarious.

Today’s migrants have long been an underclass of citizens in a country where ancient caste and religious divisions have been exacerbated by the Hindu nationalist government of Narendra Modi that has already attempted to narrow citizenship to those that serve its ideological priorities. A national underclass of informal labourers was not a priority in this attempt to “saffronise” India at the expense of disenfranchising its minorities.

The sudden announcement of India’s lockdown on March 24 – with four hours’ notice – may have been welcomed by the affluent and politically secure classes, but it placed the biggest burden on the migrant underclass. No wonder they have taken to the roads. Marginality and migration have, after all, long shared a history.

With the Indian government unwilling to coordinate a national response to the displacement crisis caused by COVID-19, it was largely shaped by diverse regional approaches determined by state governments, with little or no direction from the centre.

In theory, there should be no dearth of “protection” to hand. The Indian army has the largest ground force in the world with approximately 1.4 million personnel. The Indian government could well have put its mighty army at the service of providing food, health care and transport for its citizen-migrants.

State governments side-stepped seeking military assistance, placing their supposed abilities to manage what happens in their states over human interests. The chaos on the ground reflects the absence of political coordination and a dire neglect of well-established global principles of protection for migrants and displaced people that ought to have been nationally implemented with due foresight.

As a result, the movement of people through India in haphazard ways has severely compromised human security. Not only are migrants left destitute, but those they encounter in their travels – truck drivers, villagers, fellow travellers, to name just a few – are placed at grave risk from COVID-19 infection. Unsupported, untreated and untested, with only a soiled mask hanging off their tired faces, the citizen-migrants of India have, yet again, had their rights to protection obscured.

In some cases, there has been significant success, particularly in the state of Kerala, where migrants are being supported with food, shelter and jobs so that only a tiny percentage of them are forced to return home. And in others, there have some truly disturbing actions based on ignorance and abuse, such when some migrants in Uttar Pradesh were forced to squat and then sprayed with disinfectant.

Mostly, the strategies form an uneven patchwork that does little to support these Indians in their forced travels. The Indian government’s policies surrounding citizenship and the right to a secure and dignified life were already a human rights issue before COVID-19. Today, the question of who can support India’s internally displaced workers as they struggle to get back home is all the more urgent.

Parvati Nair is a Professor of Hispanic, Cultural and Migration Studies at Queen Mary University of London.