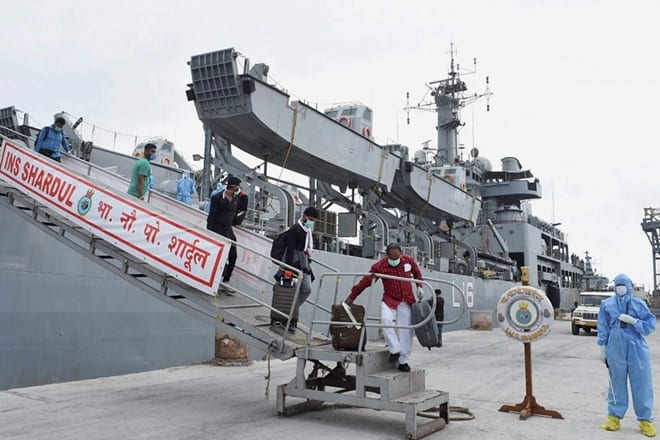 The Indian Navy has brought back 3,992 citizens from various countries stranded due to the Covid pandemic, the force said on Wednesday. The Navy launched Operation Samudra Setu on May 5 as part of the national effort to bring back Indian citizens from overseas during the pandemic.

The Indian Navy has previously undertaken similar evacuation operations as part of Operation Sukoon in 2006 (Beirut) and Operation Rahat in 2015 (Yemen).

The Covid pandemic has had a significant impact on ships and seafarers due to the compact environment and forced ventilation systems onboard ships.

“It was in these trying times and difficult conditions that the Indian Navy took up the challenge to evacuate our distressed citizens from overseas,” Commander Vivek Madhwal said.

The greatest challenge for the Indian Navy was to avoid any incident of outbreak of infection onboard the ships during the evacuation operation. “Rigorous measures were planned and medical/safety protocols unique to the operating environment of ships were implemented. These were strictly followed onboard the ships undertaking Op Samudra Setu resulting in the safe return of 3,992 of our citizens to their homeland,” the officer said.

Ships used for the operation were specially provisioned and the sick bay or the clinic onboard was especially equipped with Covid related equipment and facilities.

Women officers and military nursing staff were also embarked for the women passengers. Basic amenities and medical facilities were provided to all evacuees during sea passage on these ships.

An expectant mother who undertook passage on Jalashwa, Sonia Jacob, gave birth to a baby boy within a few hours of reaching Kochi on International Mother’s Day.

Along with other government agencies, the Navy has also been at the forefront of national efforts to assist Indian citizens. The Navy’s IL-38 and Dornier aircraft have been used for ferrying doctors and Covid related material across the country.

READ ALSO: Vande Bharat: ‘Indian Consulates will not rest till the last person stranded in Australia is evacuated’