Indian Link Radio: If music be the food of love… 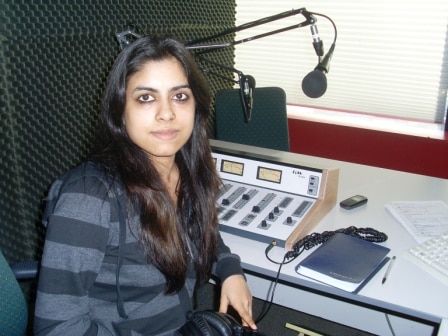 Reading Time: 4 minutesIndian Link Radio broadcaster SHRADDHA ARJUN on how she preps for her show, her wide taste in music, and how to connect with listeners

Ask me what my current favourite song is, and I’ll say Tere Ishq Nachaya by Sona Mohapatra. Or Mo Funk by Advaita. Or No man will ever love you like I do by Raghu Dixit.
For someone whose love for music is not limited to any genre – I enjoy Lady Ga Ga just as much as MS Subbulakshmi – my work at Indian Link Radio is something I absolutely enjoy.
To keep our Bollywood-savvy clientele happy, I am uptodate with the very latest in Bollywood. And while I do enjoy much of what’s on offer, my special passion has to be with the more non-filmy stuff like Indian pop/rock/metal bands that dare to experiment. My regular listeners will vouch for that!

Saturday Night Unplugged
My current show on Saturday nights Saturday Night Unplugged, 5.00pm – 8.00pm is entirely based on music. Good music!
In half hour segments, I present Bollywood songs based on a particular genre (jazz, electro, rap, folk etc); rag/taal based film songs and general discussion about the chosen rag/taal; an artist in focus (a new/upcoming musician/band, not mainstream Bollywood if possible); local talent (live interview/performances), as well as new numbers, popular hits, retro and yesteryears musician/composer/lyricist.
The story of a song interests me the most: how it came about and what it signifies. Like Satrangi re from the movie Dil Se: it establishes the foundation of the love story between Amar and Meghna (the protagonists) in the film, which then goes through 7 stages of love as described in ancient Arabic literature. These shades are defined as attraction, infatuation, love, reverence, worship, obsession and death.
I try to look beneath the surface to understand and appreciate the nuances and finer details of a composition. For example, Minds Without Fear, a number by Grammy Award winning artist Imogen Heap and Vishal Dadlani, came about when Imogen read Tagore’s famous poem Where The Mind Is Without Fear.
Indian film music tends to take us away from other kinds of music that is made in India. There are several musicians well-versed in classical/folk and other genres of music based in India who are sometimes better than the most popular playback singers. Sometimes we find that artists crossover and create beautiful fusion of musical styles that is not necessarily mainstream. I try to research and include their creations in my show.
I’ve had some artists from my playlist such as Raghu Dixit, Advaita, Rekha Bhardwaj retweet me or tweet back in reply when I tweeted that I was dedicating a half hour to their music on Indian Link. This is very encouraging and is definitely as good as a compliment in my opinion!
My show involves a minimum of two hours of research. I don’t always feature the artists I love or admire the most. I sometimes play music that I don’t necessarily listen to. I try exploring something new every weekend, stepping out of the comfort zone and expanding my knowledge about music and that of the listener.

Baby steps
For my very first show over two years ago, I wrote a thorough script. I read from it word for word. It was very informative, however it lacked in spontaneity and sounded very rehearsed. I then realised how important it is to connect with the listeners, and simply reading from a website/piece of paper would never help me do that.
At the moment, I do my research well ahead of my show, have a few pointers and speak spontaneously, often including references to current events around me at the radio station or in the news.
Of course much work has gone in to develop my current style. At one stage I was presenting the morning show 7.00am – 9.00am, five days of the week. This included an hour-long segment on spirituality and positive thinking accompanied with bhajans, and another hour on news stories of the day from India and Australia plus stories about the box-office, film releases, horoscopes and books.
The spirituality segment was the most challenging, for a young 20-something party babe like me! Although I have a certain amount of familiarity and understanding of the vedas and spiritual texts, I am no expert at it. However this segment actually got me a lot of praise and appreciation, especially from older listeners. I’ve had listeners invite me for lunch to their homes (Mrs Kler, Neelam) and sometimes even visit me at the radio station (Ashaji). It was an interesting experience – the reaction from the listeners was completely unexpected. There was a lot of participation from the listeners and many called to tell me that the show helped them prepare for the day and cope with stress.

A desi girl at heart!
Initially when I had started off as an RJ at Indian Link, I tended to speak mostly in English. This actually did not go down too well with my morning show audience. I was able, however, to turn that around by up-skilling. I ended up getting compliments about how shudh my Hindi was on my morning shows, which in my opinion was the best compliment that I’ve ever received (specially because Hindi is not my native tongue, I’m a Tamil speaker!
I once had a listener who called in from Perth to correct my pronunciation of the name of a hill station called “Chail”. While it was true that he was a bit unhappy about it, I was actually quite thrilled to know that someone was listening to my show in Perth! (This was before the Indian Link app was introduced and much before it was on Facebook).

Link up with me on Indian Link
I have enjoyed both the phases of my time at the Indian Link Radio and grown not only as a presenter but also as a human being in more ways than one. Now that I am working elsewhere full-time, I look forward ardently to Saturday nights to present my show and play some great music.
Look out for my updates on Facebook, and come join me on a radio date Saturday nights!