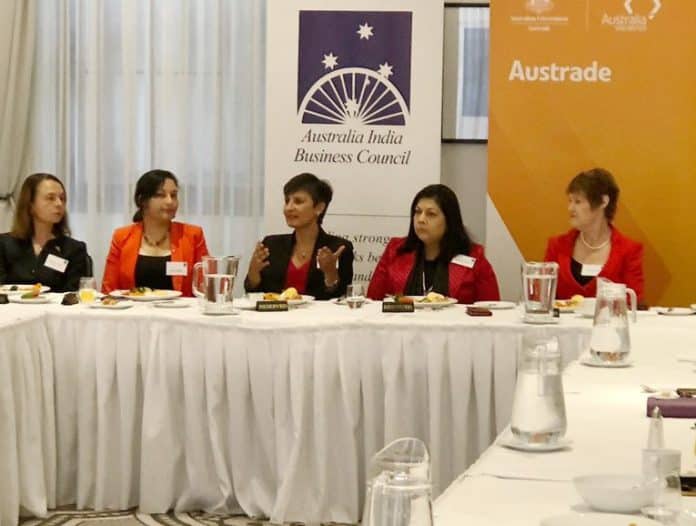 Reading Time: 3 minutesWith the release of the Peter Varghese report by the Australian Government, An Indian Economic Strategy (IES) to 2035: Navigating from Potential to Delivery, the road map for achieving greater Australian trade with India has been etched out.
Again.
As some may say.
Harinder Sidhu, Australia’s High Commissioner to India, acknowledges that this conversation has been had before, but she offered a new perspective on this on her ongoing trip back home.

Speaking at a networking session in Sydney recently, organised by AIBC, Austrade and DFAT at the offices of Deloitte’s, her views were that the changes in the world’s socio economic environment will drive greater engagement between India and Australia.
“With global changes, India is willing to engage more,” she said.
In an earlier interview with India’s Hindustan Times, Sidhu had been quoted as being mildly critical of India, saying that Australia cannot be doing all the pushing.
At the IES networking session, she acknowledged that the aim should be to have India as one of the top three trade markets for Australia by 2035. And to do so, Australian companies had to understand India in its own right. “India is to be treated different to China from a business perspective. India needs to be understood on its own terms. And for those who do, the rewards are substantial,” she said.
While Sidhu spoke about the overarching opportunities, Leonie Muldoon from Austrade detailed the practicalities of doing business with India. Acknowledging that education will be one of the pillars of the economic relationship, with aspirational middle class parents keen to provide quality higher education for their children in Australia, she questioned whether the Australian education industry was ready for these students. Muldoon also spoke about the opportunities in food and beverages industry.


“However, we need to understand that Australian and Indian businesses can sometimes be like Venus and Mars,” she observed. “Large Indian companies can be family-owned, with a greater risk appetite and longer term frames for investment; Australian companies are stock exchange listed, with a shorter time frame for results of 3 to 5 years.  Over time, what will make it work will be for Indian businesses to shorten their time frame and for Australian businesses to increase theirs.”
The ongoing dialogue created by the White Paper allows for a robust discussion but as Sidhu has said before, the true impact will lie in the implementation.
*
Earlier that day, it was at another AIBC event that the High Commissioner started her jam-packed day. Leonie Muldoon joined her as she mingled with community women at a Women in Business breakfast. AIBC’s Sheba Nandkeolyar and Pallavi Sinha hosted some 20 women from Sydney’s Indian community working in government and business, and the High Commissioner got to hear from some of them.
In her own brief address there, she spoke about IES2035, as well as about women in diplomacy. She is herself part of the Australian foreign ministry’s Women in Leadership initiative. “There was 50-50 split between male/female recruitment at graduate level for 30 years to 2015. In 2015, 59% of DFAT staff, 34% of SES, 27% of HOMs, and 13% of HOMs of large posts were women,” she observed.
She paid tribute to the work of DFAT Secretaries Varghese and Adamson in tackling this issue and noted that DFAT had already made very strong progress since 2015 in increasing the numbers of women in senior executive and ambassador roles.
She also spoke about her own posting at New Delhi and shared an anecdote about a young female employee who claimed her time at the Australian High Commission has inspired her to aim for the Indian Foreign Service.
Let’s hope Harinder Sidhu, a quiet achiever and strategic thinker, continues to inspire at the personal as well as the bilateral levels.
with Rajni Anand Luthra
- Advertisement -
Share
WhatsApp
Facebook
Twitter
Linkedin
Previous articleA cake for Janmashtami
Next articleMake your business dream come true