The Incredible History Of The Indian Ocean (Book Review) 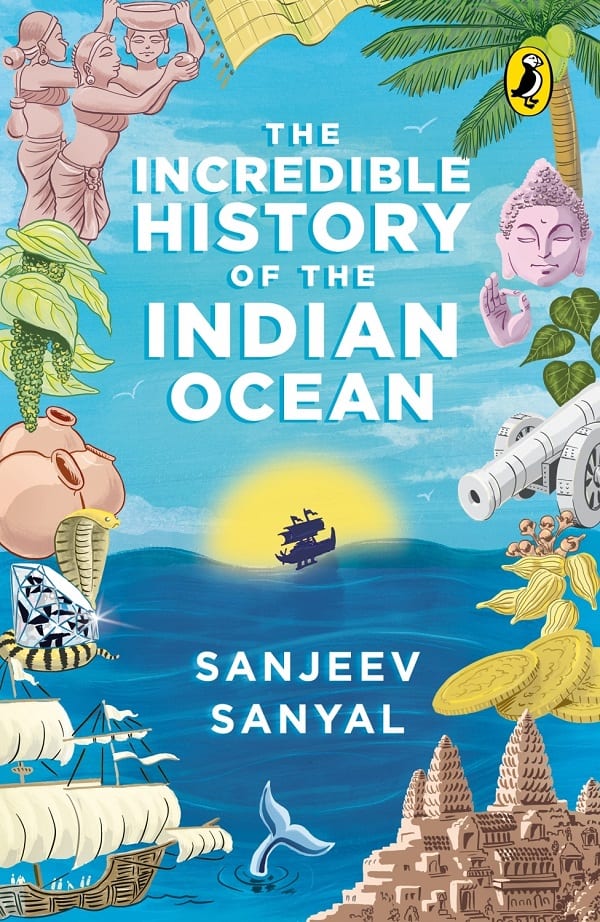 The Indian Ocean is an ocean as vast as the sub-continent whose name it bears, encompassing Asia to the north, Australia to the east, and Africa to the west. With 20 percent of the water on the Earths surface, the sea routes of the Indian Ocean carry 80 percent of the worlds shipping trade in oil, connecting East Asia, the Middle East, and Africa to Europe and the Americas — and without New Delhi intending it so, could be the theatre of a new geopolitical rivalry between India and China.

But then, as the internationally acclaimed economist and urban theorist Sanjeev Sanyal puts it, “those who remember history will know that the Indian Ocean has seen the likes of Rajendra Chola and Zheng He before. They will also know to expect the unexpected”, Sanyal writes in “The Incredible History Of The Indian Ocean” (Puffin), an adaptation for young readers of his seminal work, “The Ocean of Churn”.

“After all, no one who saw Zheng He’s magnificent Treasure Fleet” of over 300 ships with almost 28,000 crewmen, “would have believed that, a few decades later, a small country in the Iberian Peninsula” (where Venetian trader Marco Polo had carried tales of Chinese magnificence) “would open the Indian Ocean to centuries of European domination”, writes Sanyal, currently the Indian government’s Principal Economic Advisor.

The long history of the Indian Ocean, he writes, “is one where the unfolding of events is the result of complex interactions between myriad factors — the monsoon winds, geography, human migrations, technology, religion, culture, the deeds of individuals and, perhaps occasionally the whims of the gods. It followed no predetermined path or grand plan, but is the story of long cycles, dead ends and unintended consequences, of human triumphs and extraordinary bravery but also of treachery and inexplicable human cruelty. There are many shades of gray along the way”.

These shades of grey exist to this day.

For instance, Djibouti on the Horn of Africa is the gateway to the Gulf of Aden and the Red Sea –the entry and exit to the Suez Canal – and is home to major US and Chinese military bases, as also of France, Italy and Japan. It also overlooks Somalia, the hub of sea piracy in the region. How do these contradictions exist, is a question that strategic analysts often ask.

“The complex adaptive nature of history is a warning that a linear narrative based on a unidimensional framework is necessarily misleading. A corollary is that the path of history flows neither from or to Utopia. Indeed, the attempts to ‘civilise’ others and impose utopias have been the source of much human misery and are almost always based on some unidimensional interpretation of history,” Sanyal writes.

It is also remarkable, the book says, “how continuities have remained through all these centuries of change. The monsoon winds may no longer dictate where ships can sail, but they are still important to the economic lives of hundreds of millions who depend on them for the annual rains. Some continuities run so deep that we hardly notice them. For instance, certain ancient cultural ideas continue to impact us to this day despite layers of later influences”, it says.

Detailing how matrilineal customs were an important aspect of history in the eastern but not in the western Indian Ocean rim, the book notes: “Perhaps this explains why we have seen so many females in Eastern Indian Ocean countries, including Corazon Aquino, Megawati Sukarnoputri, Aung San Suu Kyi, Indira Gandhi, Sheikh Hasina, Sirimavo Bandaranaike, to name a few.”

“If there is one lesson from this history, it is this: Time devours the greatest of men and the mightiest of empires,” Sanyal concludes.

It is this philosophy that resulted in the creation of the Indian Ocean Rim Association, the vision for which originated during a visit by late South African President Nelson Mandela to India in 1995, when he said that “the natural urge of the facts of history and geography should broaden itself to include the concept of an Indian Ocean rim for socio-economic cooperation…” that has within its ambit 22 Member States and 10 Dialogue Partners.

Supplementing this is the Quadrilateral Security Dialogue informal strategic forum comprising India, the US, Australia and Japan, whose senior officials at their most recent virtual meeting on September 25, exchanged “views on ongoing and proposed practical cooperation in the areas of connectivity and infrastructure development, and security matters, including counter-terrorism, cyber and maritime security, with the objective of promoting peace, security, stability and prosperity in the Indo-Pacific region”, India’s External Affairs Ministry said.

With illustrations by Nikhil Gulati superbly complementing the text, the book, through its 11 chapters, weaves its way from “The Birth of the Indian Ocean” through “Dynasties, Invasions and Shipwrecks”, “Treasure on the Other Side of the World”, “In Search of Spices”, and “This Land Is Our Land”, et al, to “From Dusk to a New Dawn” to unfold a canvas that is breathtaking in its scope.