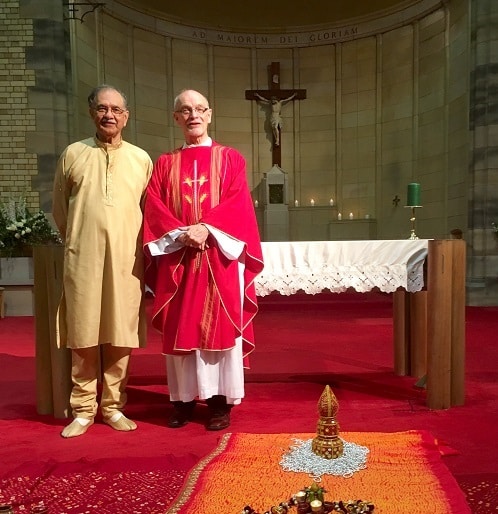 Reading Time: 4 minutesIn a wonderful example of interfaith synergy in action, Diwali was celebrated at a Sydney church for the sixth year in a row this year.
St. Mary’s Church in North Sydney has been observing the Hindu festival since 2012, in an initiative developed by Indian community elder Neville Roach.

Parish priest Father Andy Bullen presided over this year’s ceremony.
Traditional Indian lamps complemented the church candles. There was an aarti (obeisance by light) and pushpanjali (offering of flowers), and the singing of hymns as the overheard screens carried the translations for the congregation to follow.
Tamaso ma jyotirgamaya, the Shanti Mantra from the Brihadaranyaka Upanishad, was chanted. The essence of it – lead me to light – finds consonance in the hymn Lead Kindly Light as famously pointed out by Mahatma Gandhi in 1947. (“In my daily prayers, I earnestly pray to God to lead me from untruth to truth. Isn’t the same idea conveyed in Lead Kindly Light?”) The hymn, with words that date back to 1833, became Gandhiji’s favourite, and he had it translated in Gujarati.

St. Mary’s youth choir presented the hymn at its Diwali service this year, and parishioners heard Premal Jyoti, the Gujarati version as well.
At the end of the service, as Father Andy urged his parishioners to greet each other in peace, he invited them to use the Indian form of greeting, Namaste.
Earlier, in his homily, he touched upon India and its culture of connecting humanity and divinity. “They both complement each other; if you touch one, you touch the other. Divinity is in all of us, according to the Hindu religion,” Father Andy preached.
To conclude, the parishioners were ushered out by a leading party that danced a simple step with dandiya sticks, an uplifting move that added to the festive spirit of it all.
In previous years, the event has also included the blowing of the conch shell, with images and symbolism displayed on the overhead screens.

Talking to Indian Link later, Neville Roach described the origins of the church’s little Diwali service. It all began when Chinese New Year was marked one year.
“I suggested to our priest that we could do something for Diwali, and he agreed immediately,” Neville recounted. “As I began to think about it, it occurred to me that we should really be including the Aboriginal and Torres Strait Islander culture at our church before recognising Diwali. So we did that first. Now, that has become an annual feature too: in NAIDOC Week, we observe an Aboriginal and Torres Strait Islander Sunday.”
Neville is as deeply committed to Reconciliation and Indigenous affairs as he is to growing the relationship between his homeland India and his adopted country Australia.
A committee of interested people was founded for the church’s Deepavali celebration. “It was not easy to include and integrate Hindu elements into Catholic Mass. There were sensitivities that had to be negotiated. Mass is an important religious service, and we didn’t want to disturb the core elements of Offertory, Consecration and Communion. Fortunately, Jesuit priests are relaxed about it, but we didn’t want to upset anybody. In the end, I think we got the formula right.”
Serendipitously, it turned out that Father Phil Crotty who presided over that inaugural Deepavali service, has lived and worked in India for 50 years.  He speaks Hindi and Bhojpuri, and is steeped in the culture of India.
“It was quite special to hear him speak of India that day – his love for India came out. He talked of Diwali in the villages, when the land would be lush green with the rains. At night, the pitch-dark landscape would burst into colour with the little Diwali fires all around. The magical quality of it all came alive for all of us as he spoke.”
Following on from there, parishioners are invited to come dressed in Indian colours, and bring a plate. They are urged to stay on for a bit afterwards and have a chat.
“We don’t want to overdo it either,” Neville admitted. “We like to finish on time, and so ensure that it all goes like clockwork.”
In this, Pradip and Kamini Pandya and their daughter Purvi from Sydney’s Indian community, have helped with the organisation, as have Mala Mehta and others. Neville’s family including wife Gladys, their kids and grandkids, all attend and participate whole-heartedly. This year, Consul General of India B Vanlalvawna, his wife Rosie Bawitlung and their kids attended the mass for the second year in a row.
Of course, there is a precedent to Diwali being celebrated outside of the Hindu faith, Nevelle mentioned. “Pope John Paul II visited India in 1999 during the Hindu festive season. He led a Holy Mass on Diwali wearing a tilak on his forehead.”
The event was held at New Delhi’s Jawaharlal Nehru Stadium. Twelve large traditional Indian lamps decorated the stage from which the pontiff addressed the capacity crowd. The only liturgical service of the Pope open to the public, it was filled with biblical references to the theme of light conquering darkness.
Vatican messages have gone out to Hindus on Diwali for many years now.

For Neville, the St. Mary’s ceremony never fails to bring a lump to the throat.
“Culturally, the event gives us a sense of India. It promotes religious tolerance and interfaith respect by reaching out to another great faith. And for me personally, it is another opportunity to extend the relationship between Indian and Australia.”