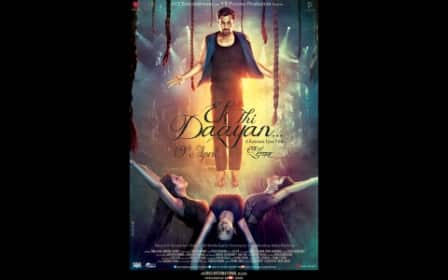 Do you believe in the supernatural? Even if you don’t, this fabulously effective take on the wages of renewable evil would prompt you to look nervously over your shoulders the next time you pass through a dark, shadowy corridor.
So right away, a round of applause to producer Vishal Bhardwaj and first-time director Kannan Iyer for a scare fare that goes way beyond the mundane terror gimmicks of Indian cinema’s much-abused horror genre to search out the very core of the human nature.
Why do we fear the unknown? And could it be what we consider to be the supernatural is actually a manifestation of our own deep insecurities?
Ek Thi Daayan enters the world of the supernatural with a finesse and delicacy rare to the horror genre.
The first hour of the storytelling when we are taken back to the magician-hero Bobo (Hashmi)’s seemingly well-ordered childhood, is splendid, warm, funny and, yes, ominous.
The child actor Vishesh Tiwari who plays the young Hashmi and the little girl who plays his baby-sister are delightfully unaffected. The bubble-waiting-to-be-burst world of the two children is steeped in a distant sorrow and a vague terror, as though to say, we who believe good triumphs would have to suffer a whole lot of evil before we arrive at that state of moral liberation.
More than the somewhat scattered second-half, it’s in the early sections of the storytelling where director Kannan creates a feeling of fabulous foreboding through hints and whispers, rather than red-herrings and shrieks.
The creaky lift descending into ?hell? with the two children clinging on for dear life, the creepy lizard on the wall which might be much more that what it seems, the hints and signs of diabolism are strewn across the length and breadth of the breathtaking frames.
But then again, the ?witch? could just be a scared little boy’s terror of a stepmother. Who knows why we fear what we do?
For crying out loud, this is such a normal seductive world! To see it shatter with supernatural aberration is a heart-shattering experience.
The nimbly-knitted script builds evil into the world of normalcy and innocence. The narrative’s gaze never falters as it sweeps across the characters’ lives making inroads into the anatomy of evil without charting a course that has been green lighted by the cinematic horror conventions.
Ek Thi Daayan is far more delicately delineated, much more ?caste?-effective than other films of the horror genre. The actors act terrified, but they don’t run around screaming blue murder. They are too shaken to act suitably scared.
Emraan Hashmi as the magician who finds his world torn apart by events his wand cannot pretend to control, brings an anguished tension into the plot without stumbling over the dark edges of the plot.
But the film clearly belongs to the three luscious ladies.
While Huma Qureshi and Kalki are seductive and impish, it’s Konkona who clearly takes possession of her part and of the film with authority.
The fact that her father Mukul Sharma has written the original story could have played a part in establishing Konkona’s comfort level with the eerie environment. But you suspect it’s more inherent. Talent finds its level.
Saurabh Goswami’s cinematography takes care of the rest. This is one helluva good-looking film that lights up not just the characters and their surroundings but also sheds luminous light on the darkness within the characters that reveals itself fits and starts, to cast a splendid spell over the audience.
Ek Thi Daayan re-defines the spook genre. It’s at once eerie and enchanting, soft, subtle, dark and yet powerful and persuasive.
Tonally rich, vibrant and sensuous, the performances including Pavan Malhotra as Hashmi’s bewitched dad and Rajtava Dutta as his bewildered shrink, boost the beauty of the witches’ tale.
More treat than trick, no matter ?witch? way you look at it, Ek Thi Daayan is in one word, ?daayan-mic!?

If it is any consolation, Rohan Sippy’s latest presentation is far more cohesively constructed and sure of its raison d’etre than his last film Dum Maro Dum, which bumped off its protagonist half-an-hour before ?The End’.
Thankfully, no one dies during Nautanki Saala! – not even the audience from laughing. This one is just not funny enough to qualify as a LOL (Laugh Out Loud) spree. At the same time, the bum-chum camaraderie between Ayushmann Khurrana and Kunal Roy Kapoor is so pronouncedly pungent that we cannot but chuckle at the gambolling antics that take this desi French Friday special to the level of bearable humour.
Oh, didn’t I tell you? Nautanki Saala! is a remake of a 10-year-old French film Apres Vous, which I had the good fortune of seeing. While the French film, directed by Pierre Salvadori, is far more nimble-footed in the telling of a quirky ‘One Fine Evening…’ plot, the ?official? remake (unofficial ones went out of vogue with stringent copyright laws) scores for the sheer joie de vivre (don’t miss my French appreciation!) that Ayushmann brings to the table.
Kunal – as all of us who have seen that homage to horniness called Delhi Belly know – is an actor with notable comic acumen. Here as the spaced-out suicidal stranger, who blows into Ayushmann’s theatrical existence, Kunal confers a sense of hectic audacity to his intruder’s part.
Ayushmann bequeaths a clenched vitality to his character. Here’s an actor who knows how to milk a situation or a line and exactly where to stop before it goes over the top. As the reluctant exceedingly altruistic host to a suicidal guest, Ayushmann goes beyond his Vicky Donor debut to show some hefty mettle.
Unfortunately, the writing just doesn’t give Ayushmann, Kunal or the three pretty female actors a chance to breathe easy and let their characters acquire their own volition. Not that the screenplay is in a hurry to get anywhere. Rather, it takes its time to get somewhere that we don’t really reach in spite of the film team’s best intentions.
It remains a mystery why Sippy – whose earlier films, for whatever they were worth, were originals – would now want to remake a mediocre French film. This is not as inexplicable as a remake of Himmatwala. But then again it does make you question the scarcity of original screenplay writers in our cinema.
On the plus side, the original French film’s restaurateur’s realm is relocated into the bustling theatre world. And that is a cue for some eye-catching visuals and in-house humour.
Sippy’s eye for theatrical detail can’t match what R Balki did to the restaurant business in Cheeni Kum. But then, who’s comparing?
The cinematography is a refreshing synthesis of gritty realism and flights of colourful fantasy, quite like two worlds off and on stage that Ayushmann’s character grapples to come to terms with.
All said and dumb, the comic timing of the two lead actors does keep the narrative on track most of the way. Ayushmann and Kunal dig happily into their derivative roles of the saviour and the loser from the French film. The duo whips up a wicked humour in this comedy of errors filled with a reined-in blizzard of boyish bacchanalia and banter.
While you are mildly amused by their antics, you don’t come away overwhelmed by this comic outing on the downside of spontaneous hospitality.
Oh, Sippy had desecrated the RD Burman classic Dum Maro Dum in his last film. Here he goes at the Anand-Milind track “Dhak dhak karne laga“.
Frankly, it doesn’t make a difference.