Bliss in the Blue Mountains 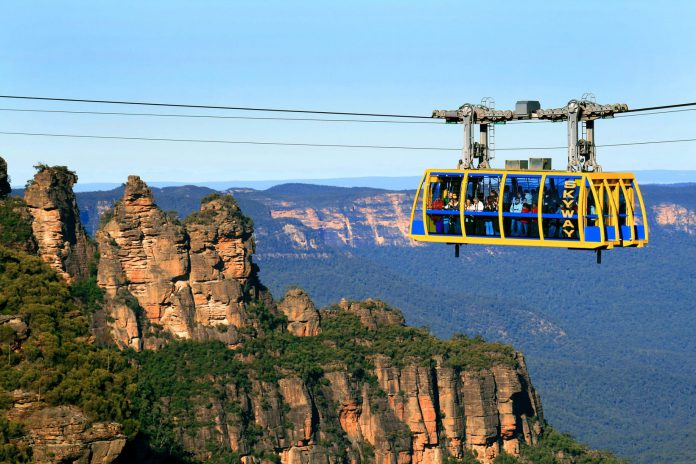 “Many more steps?” I asked the hiker heading towards me.

“Why, thousands!” replied Hal, a spritely looking 74-year-old who had walked for 5 hours from the Three Sisters down to the valley floor, and was now completing the ascent to Leura Cascades. Somewhat more ambitious than my 2-hour hike along the Prince Henry cliff walk, one of many hiking trails.

The Blue Mountains is an area of breathtaking views, waterfalls, sheer cliffs, deep valleys and one of Australia’s most spectacular wilderness areas, within easy reach of Sydney.

World Heritage Site listed, it consists of 10,000 square kilometres of mostly pristine forest that forms part of the Great Dividing Range. A plateau runs from east to west on which the rail line and highway were built, as well as the many towns and villages.  With an altitude of 975 metres above sea level at Leura, 1017 metres at Katoomba and 1300 metres at its highest point, during winter temperatures drop and a sudden snowfall is not uncommon.

More than 100 species of eucalypts are found here as well as one of the world’s rarest species, the recently discovered Wollemi Pine, thought to have been extinct for millions of years. The few surviving pines are located in remote gorges.

More than 400 different kinds of animals live here including spotted-tailed quolls, koalas, yellow-bellied gliders, long-nosed potoroos, wallabies and possums. There are also many birds to be seen including parrots, rosellas, cockatoos and kookaburras. The area is renowned for sightseeing, bushwalking and rock climbing.

The area is also historically significant. In 1788, the Blue Mountains were named ‘Carmarthen Hills’ by Australia’s first Governor, Arthur Phillip; however the distinctive blue haze caused by oil produced by eucalyptus trees saw the name changed to the Blue Mountains.

The rugged terrain was seen as an impassable barrier but on May 11, 1813, Gregory Blaxland, William Charles Wentworth and Lieutenant Lawson, along with four servants, four horses and five dogs, set off across the Blue Mountains. Eighteen days later they reached the gentle slopes to the west.

In 1814, William Cox assembled thirty convicts, eight guards and two aboriginal trackers and built a road across the Blue Mountains in just six months, covering a distance of 101 miles. A series of military posts were then built to protect travellers from being attacked by aboriginals, and the settlements of Wentworth Falls, Springwood and Blackheath were established.

The renowned scientist Charles Darwin visited here in 1836 and during the 1850s, gold was discovered near Bathurst. The railway line opened in 1867.

Katoomba was where in 1879, JB North opened the Katoomba Coal Mine. Coal was brought up using a cable car that continued in operation until 1900. The Scenic Railway operates in the original cutting and has an incline that is not for the faint hearted.

Australian aborigines inhabited the area for thousands of years. An essential stop is the Three Sisters lookout. According to an aboriginal legend three sisters, Meehni, Wimlah and Gunnedoo lived in the valley with their father Tyawan. A bunyip, or mythical monster, inhabited a waterhole nearby. Whenever Tyawan searched for food, he would leave the sisters safely on a cliff ledge. But one day the sandstone split and they were stranded. The bunyip approached to rescue them, but their father fearing the bunyip, used a magic bone to turn them into stone and himself into a Lyre Bird. The three sisters stand silently overlooking the valley.

While Leura and Katoomba are must-sees, Blackheath, Wentworth Falls and the many other towns and villages also offer outstanding hiking trails, delightful gardens, cafes and antique shops. Blackheath’s most famous view is from Govetts Leap Lookout with its striking panorama of the Grose Valley.

While returning on the train back to Sydney, I reflected on the many times I had spent in the Blue Mountains with my twin daughters bushwalking, feeding rosellas, and collecting twigs for the log fire. It is a place where happy memories are made.

Getting there If travelling by train, I’d recommend arriving in Katoomba and departing from Leura if you plan to access the main sights either on foot or by joining the hop on, hop off bus or trolley car. Trains depart from Central Station hourly Website: www.131500.com.au Tel: 131-500. Hop on Hop off bus Tel: 1300 300 915. Trolley Car Tel: 02 4782 7999. Many tour operators offer guided day tours to the Blue Mountains. If travelling by car, head for the Great Western Highway with fast access via the M2, M7 and M4 motorways, and consider returning along the Bells Line of Road.

Insider’s tip Tourist coaches visiting the Blue Mountains head for Echo Point first, Scenic Railway second. Visibility is best though between 11-2 when you’ll avoid the crowds.  The Scenic Railway is the world’s steepest, best avoided if you have a fear of heights. Most find the experience exhilarating. Visit www.scenicworld.com.au. For bushwalking, wear sturdy waterproof footwear and warm clothing. Bring a rain jacket, water bottle and food. Signage on paths is often lacking.

Where to stay Perched on the edge of cliffs with spectacular views, the Accor Hotel group has totally revamped the Fairmont Hotel at Leura. The decor is impressively stylish and contemporary with spacious gardens, activities including golf and a range of rooms to suit couples, families, even your pet. High Tea is offered on weekends. Check for promotions www.fairmontresort.com.au Lilianfels has a more subdued ambience, with plush, clubby interiors and cosy open fires. www.lilianfels.com.au Echoes offers breathtaking views. www.echoeshotel.com.au There are many B&Bs and self contained cottages. Blue Mountains Tourism has an accommodation link at www.visitbluemountains.com.au or try sites such as www.stayz.com.au The YHA provides great budget accommodation located on Katoomba’s main street. Visit www.yha.com.au

Where to eat The Mall, Leura is lined with cafes and restaurants. Katoomba, Blackheath and Wentworth Falls also have many eateries, as do the many other villages. Don’t leave without visiting the Leura Lolly Shop.

READ ALSO: Where to enjoy the cultural fares in Seoul

Ten lesser-known museums of the world