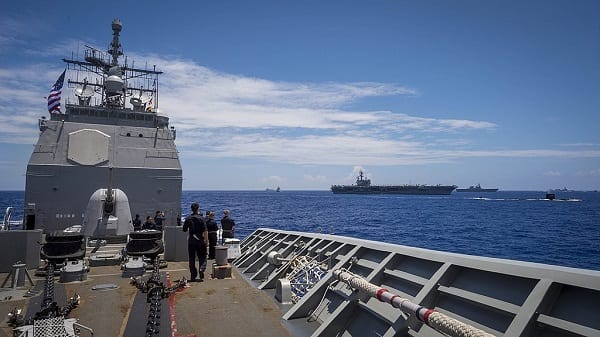 After a 13-year absence, Australia is set to take part in an annual naval drill Malabar Exercise in the Indian Ocean region along with India, United States, and Japan. The move comes amid tense relations between the four countries with China.

It is for the first time that all the ‘Quad’ countries will be part of Malabar exercise scheduled next month. It is expected to be held in the Bay of Bengal and the Arabian Sea later this year.

In a statement, Minister for Defence Linda Reynolds said this marked a milestone opportunity for the Australian Defence Force.

“High-end military exercises like Malabar are key to enhancing Australia’s maritime capabilities, building interoperability with our close partners, and demonstrating our collective resolve to support an open and prosperous Indo-Pacific,” she said.

“Exercise Malabar also showcases the deep trust between four major Indo-Pacific democracies and their shared will to work together on common security interests.”

This year, the exercise has been planned in a ‘non-contact-at sea’ format. The exercise will strengthen the coordination between the navies of the participating countries.

The participants in the exercise are engaging to enhance safety and security in the maritime domain.

“They collectively support free, open and inclusive Indo-Pacific and remain committed to a rules based international order,” the ministry said.

The Australian Navy and the Indian Navy had carried out a passage exercise in the East Indian Ocean Region on 23 and 24 September. The exercise involved the participation of HMAS Hobart from the Australian side and Indian naval ships Sahyadri and Karmuk. In addition, an Indian maritime patrol aircraft and helicopters from both sides carried out coordinated exercises.

PM Morrison thanks Sikh community on Vaisakhi for services to Australia