The Sri Vakrathunda Vinayagar Temple in Melbourne comes with a rich history, over thirty years in the making. 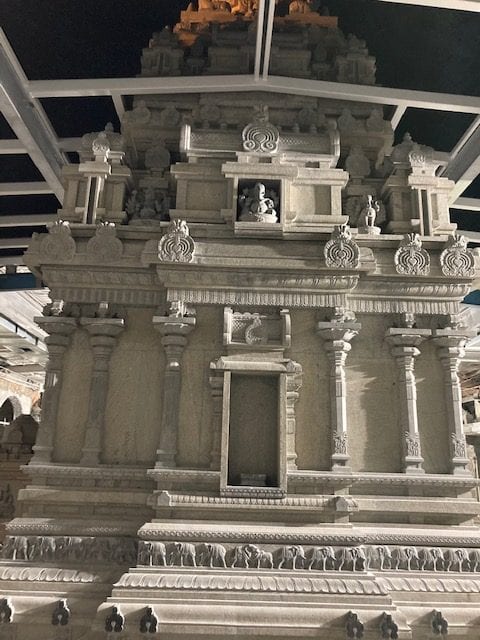 The latest COVID-19 lockdown in Melbourne has caused delays in the consecration ceremony (Maha Kumbabhishegam) of the largest Hindu temple in the Southern Hemisphere. The temple comes with a rich history, over thirty years in the making.

The Sri Vakrathunda Vinayagar Temple in The Basin was first conceived in 1989, when a breakaway group moved away from the Hindu Society of Victoria, frustrated at the slow progress in the development of a Ganesha temple.

“We procured a church building no longer in use, close to the city,” said Shan Pillai, Secretary of the Melbourne Vinayagar Hindu Sangam (MVHS). “A pro-tem committee was founded with trustees, members and volunteers, and with donated funds, we began the process of building the temple in 1990.”

“Our association with Kanchi is therefore very long and very deep,” Shan said with reverence. “We have gone back for every consecration.”

(It would turn out to be the first of many “miracles” in the journey of the construction of this temple, miracles in which challenges that cropped up were magically sorted out – almost as if Ganesha himself, the Remover of Obstacles, was clearing the barriers for this devout group of Melbournians.)

In Melbourne, in the absence of formal premises, the deity lived in the home of devotees Mr and Mrs Somasundaram for eighteen months and was taken out every month for worship at a local hall where devotees gathered.

“500 devotees turned up in those early days. It was a number we never expected, but it only strengthened our resolve to build a temple to our Ganesha”.

Soon after, the Melbourne Vinayagar Hindu Sangam (MVHS) came into being as a registered non-profit organisation. Stapathi Purushothaman, came in 1991 to design the first Ganesha Temple in Victoria. The kumbabhishegam of the temple was carried out in 1992.

By 2019, the Sangam had acquired four surrounding properties, the last of which was procured at $1.3 million.

For the second consecration in 2007 (Hindu temples have to be consecrated every 12 years or so), Purushottaman extended the temple premises and added a unique raja gopuram (grand entrance), built partly in granite sourced from India and partly in concrete.

The following year, the ten-day Mahotsava festival was launched, now an annual affair. The major highlight of this festival is the chariot procession held on the ninth day, in which the temple deity is taken out on the city streets. A grand chariot built in the tradition of the ancient Hindus is used for this purpose. The spectacle of it all makes it an iconic event for the area.

Today the Melbourne Association has around 285 members, and thousands of devotees come for many of the main functions such as the Vinayagar Sathurthi in September/October. Numbers have grown substantially in the last five to ten years. (The 2016 Census of Population and Housing showed that the number of Hindus in Australia had increased by 60% since the previous Census in 2011.)

“The development projects at the temple have all been self-funded,” stressed Balaa Kandiah, the president of the MVHS. “Not a single penny has come from the government, except for the building of our multipurpose hall for which we received a $200,000 grant.”

Three temple priests conduct the worship, explaining the rituals to the younger generation in English.

Besides worship, the temple also participates in social justice programs in the mainstream including the Knox City Council’s annual festival. It boasts a 30-year relationship with the Salvation Army and organises volunteer programs such as during the recent bushfires.

“As COVID struck, we could not unfortunately offer our services to the wider community as we became a building site rather than an operating temple,” Shan lamented.

Even though the third consecration of Sri Vakrathunda Vinayagar Temple planned for this year is now postponed thanks to COVID, Shan and Baala prefer to look at the bright side of it all.

“Puru has been working on the construction for 18 months since 2018, travelling frequently between India and Australia. When he arrived back in Melbourne earlier this year with 20 of his artisans for the final build, it was only a week before lockdown was announced.”

Another of Ganesha’s miracles, no doubt.

The current Temple committee comes with great experience and talent, many members currently working as civil engineers and architects, in senior management as well as early career roles. Shan and Balaa themselves retired from senior management roles in the corporate world and are now fully devoted to the temple cause.

As for the many “miracles” that have dotted the entire journey of the temple’s latest redevelopment, you’ll have to wait till the grand opening: a magnificent coffee table book has been planned to reveal all. It promises to be the ultimate tribute to Vignahaara, Remover of Obstacles.