A well-intentional although somewhat predictable comedy on the Indian-American diaspora. 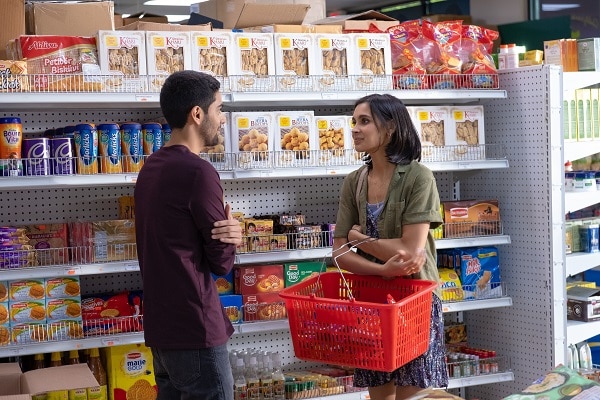 Films about the South Asian diaspora in countries like Canada, the US, Australia, and the UK aren’t particularly new. In fact, with memorable hits like Mississippi Masala (1991), Bend It Like Beckham (2002) and more recently The Big Sick (2017) and Never Have I Ever (2020-), it’s a category that is seeing some serious competition.

While some have managed to share the diaspora story particularly well, there are dozens of others that fall victim to certain tropes, such as battling the immigrant parent’s impossibly high expectations or the difficulties of falling in love with someone outside their community. Thankfully, new offering India Sweets and Spices steers (mostly) clear of these. Instead, it addresses the “log kya kahenge?” (what will people say?) mentality within the migrant community that many will sympathise with.

India Sweets and Spices, written and directed by Geeta Malik, is the story of first generation Indian-American Alia Kapur who is home for the summer from her freshmen year of college in California. She’s back in her affluent suburban community in New Jersey, one where elaborate house parties are hosted every Saturday, the local Indian store is a staple social spot, and everyone knows everyone (perhaps a little too well.)

For the first 40 minutes, we see charming and equally biting snapshots of the upper-middle class diaspora life. Alia’s mother, queen bee Sheila (Manisha Koirala) is the epitome of grace and elegance at parties and expects the same perfection from her rebellious daughter. So Alia is forced to sneak in her sips of beer in a hidden corner, away from all the judgemental aunties. Someone even plays the Bollywood hit “Beedi” that causes all the drunk uncles to, unsurprisingly, bust a move. These little scenes do pander to certain stereotypes, but they’re honest, and earnest, enough to evoke a little chuckle at ourselves. (It’s worth noting here that the film does come from the producer of another hugely successful Asian hit, Crazy Rich Asians.)

However, Alia goes on to stir this already simmering pot when she invites the Duttas, the new family to take over the local grocery store, to one of these opulent gatherings. Suddenly, we are reminded of the class differences that can exist between old and new migrants. Bhairavi Dutta (the formidable Deepti Gupta) arrives in a beautiful but simple sari and immediately feels out of place among the Sabyasachi and Manish Malhotra-adorned aunties. As the Duttas wander the party shyly, one recalls the sacrifices that humble migrants must make in the initial years to set themselves up for a life of comfort and success.

Eyebrows are raised when humble Bhairavi recognises queen bee Sheila from their college days at Delhi University. Alia can’t help but wonder: why is her mother so secretive about her past? Without giving too much away, shocking revelations are made, and Alia is forced to confront the fact that her parents are far from perfect.

Unfortunately, it’s somewhere in this crucial discussion that India Sweets and Spices begins to lose its edge. The tone shifts from playful to preachy while commenting on the patriarchal structures that haunt Indian women even after they leave the country and the unnecessary judgement and pressure that members of the diaspora place on one another (hence the tagline: “let the aunties talk.”)

Adapted from the director’s 2016 script “Dinner With Friends” that won the Academy Nicholl Fellowships in screen-writing, India Sweets and Spices is a well-intentioned although somewhat predictable comedy. We’re even offered a little love triangle and some caricature teen rivals for additional drama. The film may not provide the freshest take on the diaspora experience unlike the more well-rounded films that came before, but it is executed well by a talented cast alongside slick visuals and a catchy soundtrack. Check it out for the mirror it throws up to our own community, questioning what we could, and probably should, be doing differently to evolve collectively.