Vir Srinivas, 20, wins at Cannes with debut film Orders From Above 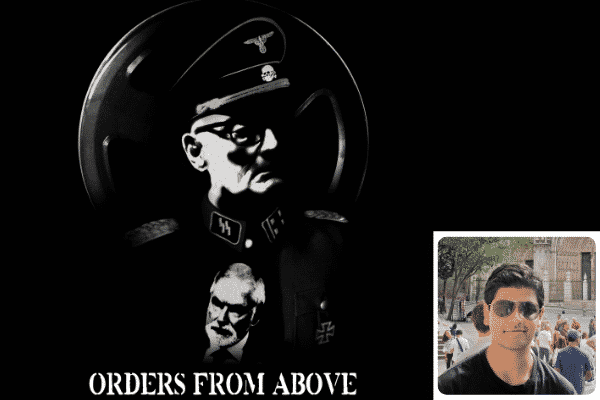 The ongoing spectre of COVID-19 lockdowns has elicited from many of us some previously repressed talents: cooking, home improvement, arts and crafts. During Sydney’s 2020 COVID-19 restrictions, 20-year-old Vir Srinivas embarked on a much more ambitious lockdown project than most: writing and directing his first feature length film, despite having no background in filmmaking and no money to make a film.

It is all the more astounding then, that Vir’s 87-minute writing and directorial debut, Orders From Above, has racked up international awards at a staggering rate, most recently winning three categories, including Best History Film, at the Cannes World Film Festival.

Vir’s award-winning spree marks a stratospheric rise for the young Sydneysider, but belies his humble beginnings in the world of film. Having studied a year of Commerce at UNSW, Vir knew a corporate career wasn’t for him, so he enrolled in a one-year Diploma of Screen and Media at the Sydney Film School. But, as Sydney entered a three-month lockdown in March 2020, so too was Vir’s enrolment delayed to July. Undeterred, Vir decided to give himself a head start, and fulfil what had long been a dream of his: to write a script for a feature film.

READ ALSO: Ranveer Harsh gets his big break on 10Play’s How to Stay Married

Vir settled on a story that was interesting, yet possible to be shot in one or two simple indoor locations: the true story of the interrogation of Nazi war criminal, Adolf Eichmann, by Israeli police. Once Sydney’s restrictions eased, Vir snapped into action to bring his story to life, finding passionate actors (Richard Cotter, Peter Donnelly, Darrell Hoffman and Emmanuel Drakakis) willing to act for free, borrowing an old camera, and buying an old voice recording device which Vir would ultimately sell the same way he bought it: on eBay.

“Being a fan of history, the moral culpability of the Holocaust and the banality of evil were things that lingered in my mind,” says Vir. “Without much production value, and it being set in one location and consisting of mostly dialogue, it was important that the story be strong enough to engage audiences.”

Vir scoured through hundreds of pages of official transcripts from Israeli police archives, with much of the dialogue from the film taken verbatim from the transcripts. Even still, it only took him one month to write the script, a feat which he acknowledged was aided by Sydney’s lockdown.

Then came perhaps an even more difficult task: bringing his debut script to life, using pockets of time after school and on weekends over the course of two months.

There were many obstacles in his way, not the least of all were budgetary and, courtesy of COVID-19, movement constraints.

“I filmed with a 3-person crew including myself, a friend’s old camera, one lens and no practical lighting,” says Vir.

Incredibly, the entire film was shot in just two locations: a friend’s small studio apartment, and a classroom at school.

Despite all the constraints, Vir’s biggest challenge was his necessarily verbose script. “My actors did very well in memorising the long monologues of detail, but to help them, I used tricks like hiding the script in props or somewhere on set for them to use as a reference,” reveals Vir.

Once the film was finished, Vir entered various film festivals, despite knowing that he would not be able to physically attend due to the pandemic. The global success of Orders From Above has since surpassed even Vir’s ambitious expectations, having picked up awards or nominations at four festivals, including Cannes and Mannheim. Vir has also written a short film – The Proselyte – which has also been nominated for several awards.

Vir’s success is unique and ground-breaking for many reasons, including his Indian heritage. Speaking to the issue of diversity in Australian media – a topic about which much has been said and written over the last two years – Vir sees some positive signs, and sees his own success as evidence that the industry is changing for the better. “I think the film industry is getting better in terms of recognising the talent that people from different walks of life can bring to the table,” he notes. “I’ve seen a few avenues where people from a variety of backgrounds and cultures can prove themselves and I hope that the industry continues to encourage these voices.”

Vir’s parents, Rohini and Krishna, are unsurprisingly ecstatic. “To say we are proud would be a huge understatement,” says Krishna. “We had no idea he had this kind of talent in him. We still need to pinch ourselves sometimes”.

Looking forward, it is not lost on Vir that a year has passed and at least from one perspective, nothing has changed. “Now, as if we have come full circle, the film is complete and we are once again in lockdown,” he muses. But Vir’s journey is just beginning, with the impressive 20-year-old already planning another short film this year.

“The future is uncertain but I am going to commit myself to this career and give it my best shot,” he concludes. “It’s my goal to make films full time.”

9 dating shows to stream during lockdown