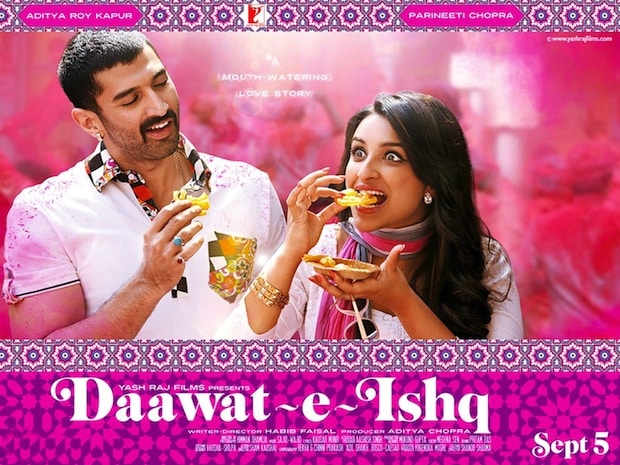 There are two different films tucked away into this one big under-cooked biryani of a film.

Daawat-e-Ishq is not as inviting as the title suggests. Food is important to the plot, yes. And hats off to writer-director Habib Faisal for tempering the texture of the tale with a culinary flavour.

You wish food were the driving force in this freewheeling tale of love. But no, this film is more about a Muslim girl’s search for a life beyond finding a suitable match…

Faisal’s special gift as a filmmaker is to portray the Indian middle-class in all its squalid glory. He doesn’t sweep the murk under the threadbare carpet. He takes on the quirks guilt and the conflicts of the ‘muddle class’ headlong.

Till a certain point the narrative in Daawat-e-Ishq tells us some pungent home truths about the over-educated unmarried middle-class girl’s plight as she is forced to squeeze into an arranged marriage.

Anupam Kher and Parineeti Chopra are so convincing as father and daughter looking for a suitable groom that you tend to forgive the film’s aggressive indiscretions that prop up prominently and intrusively in the second-half.

Yes, there are two films here. The ‘Hyderabad’ film in the first-half is effusive and endearing. The second movement takes us to Lucknow where father and daughter put up a big con show to trap an unsuspecting dulha for Parineeti.

It is tragic to see the film’s early excellence fall apart piece by piece to reveal a plot with little substance accommodating characters with a big plot up their sleeve.

Everyone behaves as if they are part of a high school play based on H.S. Rawail’s Mere Mehboob. They run around exchanging giggles, kebabs and qawwalis.

Is Sajid-Wajid’s music homage to the sound of Laxmikant-Pyarelal in the 1970s or a straight rip-off?

The intention of doing a film that involves dowry and deception cannot be doubted. Faisal means well. Alas, his storytelling doesn’t convince us of his intentions.

Performance-wise Parineeti and Anupam are a delight. Parineeti again proves herself a natural-born scene-stealer. That’s relatively easy when your co-star is hell bent on being a caricature.

Aditya Roy Kapoor with his kohl-laden eyes and pseudo-Lucknowi drawl is a disaster. His painfully self-conscious performance reduces the film to a pantomime of good intentions.

I came away with the baap-beti relationship rather than the love story.

As for food, I craved for more.
Subhash K. Jha