The film could have been a comedy or a satire, but it wobbles in between, writes VINAYAK CHAKRAVORTY. 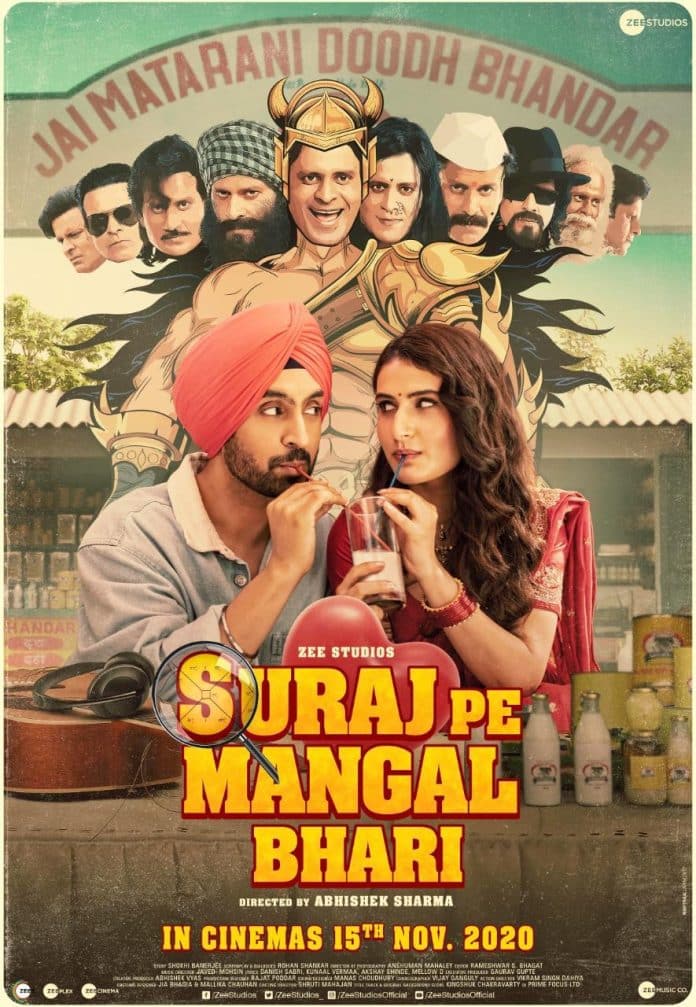 Abhishek Sharma is back with the satirical Suraj Pe Mangal Bhari, positioned as a rom-com meant to take a few jibes that are served purposely ditzy. In focus is Bombay of the nineties (which becomes Mumbai over the course of the story) as well as its locals-versus-outsiders conflict that had started gaining prominence in that era. The film also makes some noise about women and curbs on their freedom of choice, in career as well as marriage, which would often dictate many middle-class households of the era. Sharma tries concocting a mix of comedy and comment – one that does not always convince.

We already know how Abhishek Sharma loves being deliberately scatterbrained about his satire – we know from his two Tere Bin Laden films. Being goofy and caustic at the same time can be tricky business. While he sailed with Tere Bin Laden, he struggled with its follow-up, Tere Bin Laden: Dead And Alive.

In Suraj Pe Mangal Bhari, the narrative, quite predictably, sets up a clash between Suraj and Mangal. Happy-go-lucky Suraj Singh Dhillon (Diljit Dosanjh) hails from a moneyed ‘doodhwala’ family. His parents wants him settled down, and Suraj, too, is on the lookout for the right girl.

His chance is ruined when the self-proclaimed ‘wedding detective’, Madhu Mangal Rane (Manoj Bajpayee), ‘exposes’ him as an unsuitable boy in the eyes of a prospective bride. Suraj subsequently starts dating Tulsi (Fatima Sana Shaikh), and he will be stumped to know subsequently that she is Mangal’s sister. He realises he could use Tulsi to extract revenge on Mangal.

That backdrop is crisply established, before an expected game of one-upmanship starts between the two men.

The obvious symbolism of the clash between North Indian Suraj and Maratha manoos Mangal over Tulsi forms the crux of more than just the attempted comedy, it becomes clear soon enough. In many ways, Tulsi is Bombay, being prepared for her makeover into Mumbai — a girl who has a mind of her own and loves her job as a club deejay, though she has to pretend to be the sanskari daughter/sister at home, and is expected to nod sagely when Mangal dada asks her if she is okay with marrying the Marathi sarkari babu of his choice.

There is a basic problem about such symbolism and satire. Much has changed since then and, although the provincial conflicts of the megapolis may never end, Bombay of the era has essentially survived and learnt to co-exist within Mumbai of present times.

You could, of course, set aside the satire quotient and try savouring the film as a comedy and nothing else.

On paper, the premise is funny. The challenge, though, was to create enough madcap showdown moments through the writing (Rohan Shankar and Shokhi Banerjee). The film, however, runs out of gags intermittently. The humour works in fits and starts as the narrative moves towards a predictable climax, and the Suraj-versus-Mangal clashes are salvaged by the occasional quirky dialogue. The problem also lies in the fact that director Sharma and his team of writers fumble while trying to blend the intended satire with the slapstick.

Technically, the film tries capturing the essence of the nineties in more ways than just cinematography (Anshuman Mahaley) or music (Javed–Mohsin). Sharma manages to spot and film in locations of South Bombay that have not changed over the years. He manages to get the Maruti 800s and Ambassador private cars on the roads too, for effect. The mandatory item number would seem like a part of an attempt to make the film look and feel like it was made in that era.

These, though define cosmetic gloss, not enough to take attention off the fact that the film is trying too hard to tell a funny story.

A lot of the humour banks on the cast. Manoj Bajpayee gets to play an antagonist with a twist of humour and he starts off looking apt as the sly Mangal Rane before weak writing fails him. His antagonist runs out of enough engaging situations.

In fact, every character suffers from that glitch. Diljit Dosanjh is back as the happy-go-lucky loverboy he has essayed many times before, but he manages to make Suraj likeable despite the fact. Fatima Sana Shaikh, Annu Kapoor (as Mangal’s old and trusted sidekick), and Manoj Pahwa and Seema Pahwa (as Suraj’s parents) get the odd scene that lets them shine, but are mostly grappling with roles of little interest.