Reading Time: 2 minutesSometimes, the best intentions are lost in inadequate execution. Shaadisthan is a film that talks of women’s empowerment, but the effort is burdened by shoddy storytelling that simply fails to hold your attention. The plot and its culmination become apparent in less than 10 minutes, and weak narrative struggles to hold your interest. 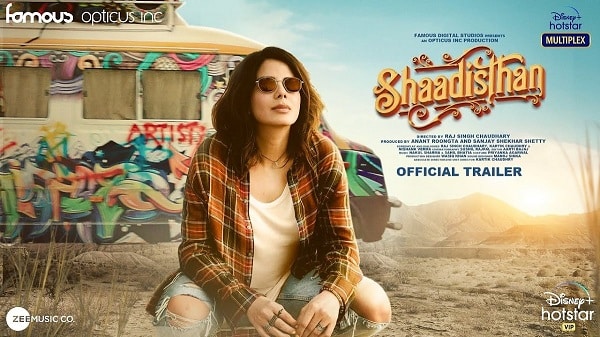 Here’s the gist of Shaadisthan: an orthodox middle-class couple (Rajan Modi and Nivedita Bhattacharya) wants to get their 17-year-old daughter Arshi (Medha Shankar) married against her wish. They have to make a trip to Rajasthan on short notice, and settle to go by road. They tag along with a group of four free-spirited musicians in their tour bus. The journey with the three men and one woman (Kirti Kulhari) becomes an eye-opener for the family. As the film ends, the parents realise – well, you would have already guessed what realisation dawns on them. In short, this is a road trip flick that increasingly starts to look like a coming-of-age story dedicated to the narrow-minded chauvinistic fathers of India.

Director Raj Singh Chaudhary’s intent was obviously to narrate a simple story that drives home significant message about gender disparity, the lack of adequate importance being given to the female voice in average Indian households, as well as generation gap. He also wanted to portray the intrinsic societal disparity between two very different Indias. There is a difference between simple and unconvincing though, and it becomes glaring as the story moves.

Young Arshi’s suffocating world is in stark contrast to that of Sasha (Kirti Kulhari), the only girl in the band. Sasha is a free-spirited person, and fiercely independent about her choices in life – at least that’s what we get to know because she puts it in as many words, in a narrative that hardly develops its characters. Effectively, within the reality of the screenplay, she comes as a wake-up call for middle-class conservatism and chauvinism.

Kirti Kulhari plays out Sasha with a dour face. She’s frowning even when she takes to the stage with mic, as lead singer of the band. Still, the cast led by Kirti makes a sincere attempt to salvage an otherwise amateurish film. Kirti, particularly, gives the film its stray engaging moments. Kay Kay Menon makes a special appearance somewhere in between the story. Menon, incidentally, had a stellar role in Gulaal, the film that had marked Shaadisthan director Raj Singh Chaudhary’s outing as a lead actor all those years ago.

That, though, is clearly not enough an attraction to make this film interesting. Shaadisthan is the story that ought to be told right now – only, not in the way they ended up doing it.