The film is a small, sincere attempt at an entertaining sports comedy, writes VINAYAK CHAKRAVORTY. 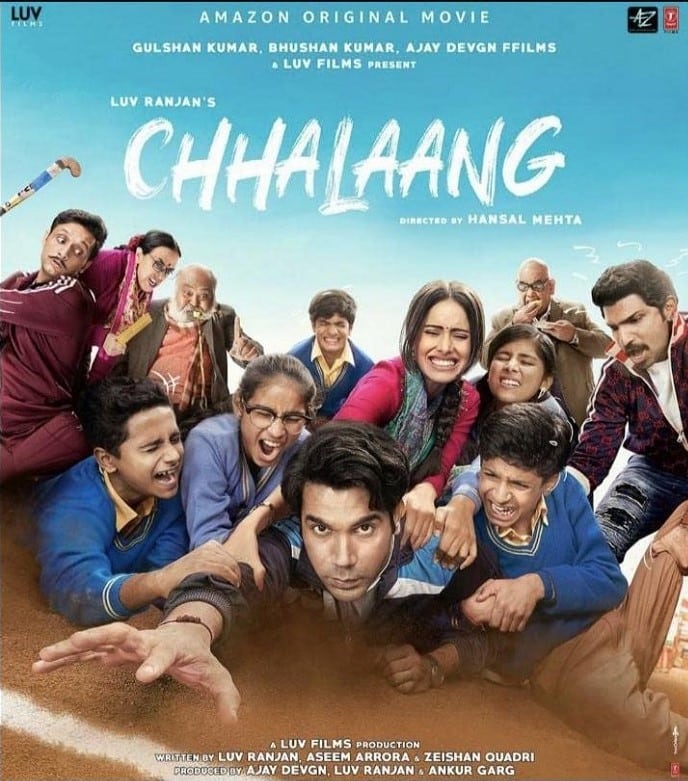 Sports films can no longer be just about sporting themes and students coming of age, as we’ve crossed that generic phase a while back. So Hansal Mehta’s Chhalaang, in the most mainstream film he has made in a while, throws in a love triangle and a whole lot of goofy humour. The story is set in heartland Haryana, and that gives him a passable scope to talk patriarchy without getting too heavy about it.

Mehta’s new film is far from the class of Aligarh, Shahid or his recent web series Scam 1992 – directorial efforts that draw automatic recall when you think of the filmmaker. That’s not to say Chhalaang lacks quality. It’s just that Mehta has made an easier film this time, probably in a bid to reach out to a wider audience given that he discusses the importance of sports in students’ curriculum. The narrative juggles light banter, a necessary love track, some drama and some predictable didactic vibes, and a whole lot sporting action towards the end.

Where Mehta departs from norms is that the coming-of-age theme in this film doesn’t pertain only to students, it concerns the protagonist teacher too. A feel-good script (Luv Ranjan, Aseem Arrora and Zeishan Quadri) introduces Rajkummar Rao as happy-go-lucky Montu, who works as physical training instructor at a school in Jhajjar. Montu couldn’t care less about his job that, by his confession, landed in his lap only because his father (Satish Kaushik) had sufficient influence to convince the school principal (Ila Arun) that he be given the job.

For Montu, twist in the tale comes with Neelu (Nushrratt Bharuccha), who arrives in the local school as computer teacher. Neelu’s cool and in-control approach towards life has Montu falling for her, and it also impacts his way of looking at life. The real push for Montu happens when the government makes sports a compulsory subject. The school in turn decides to hire the trained physical training instructor, IM Singh (Mohammed Zeeshan Ayyub).

Montu stands to lose his stature as the school physical training instructor and, worse, the attention of Neelu, for Singh is definitely the better man in every way. He throws a challenge officially at Singh — the two instructors will coach their chosen set of students for a face-off, across any three sporting disciplines. The man whose team wins, gets to continue with the job of the school physical training instructor.

Sports-themed climax is a film no longer holds the same excitement as it did all those years ago when Lagaan released. It could be a reason Mehta gives a triple finale as the two sets of students battle it out in basketball, relay race and kabaddi. One might never know if the inadequate impact of the multi-sport climax was because we couldn’t watch it on the big screen, but impact of drama and tension in the last scenes does seem low-key.

The film’s climax however is not so much about what happens in the end or who wins. It is about Montu’s coming of age as a person. Hansal Mehta and team have crafted a simple story with a simple message.

To accommodate that above bit, the overall storytelling is always in feel-good mode. The plot is suitably contrived every now and then to ensure the protagonist has the upper hand no matter what.

Rajkummar Rao and Mohammed Zeeshan Ayyub set up an engaging picture of rivalry, without going over the top for impact. Ayyub’s assured vibes as IM Singh are as likeable as the forever-brilliant Rajkummar Rao’s streak of vulnerability as Montu. Saurabh Shukla, as an old teacher who is always hanging around with Montu, and Satish Kaushik as the hero’s father are seasoned performers who enrich the film with their spirited performances.

Chhalaang is no giant leap for Bollywood filmmaking, but it sure is a small, sincere step at entertaining fans in a year when we have hardly had much reason to smile.