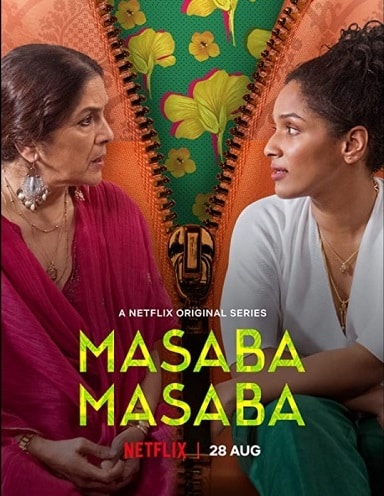 Masaba Masaba is a Netflix show which is not fully fact or fiction. It is loosely based on Indian fashion designer Masaba Gupta’s life story and so it hangs somewhere in between.

Director Sonam Nair tries to portray the complexities of being famous and not so famous. The 20-minute episodes are a peek into the alluring lives of celebrities and how they live among us with the public eye constantly following them. While us regular people might have different struggles, it is the essence of their problems that seem to be relatable and quite entertaining.

It is important to note that the show is not exactly based on the lives of the protagonist and her famous mother. The real-life controversy surrounding Neena Gupta when she gave birth to Masaba arises as a relevant context for how they behave in the show.

Masaba herself says “I’ve been surrounded by controversy all my life”.

In my opinion, it is this kind of dialogue that feels like the plot is being spoon-fed to the audience. Subtle narratives are not this show’s strong suit. The acting also does seem a bit dry, especially the main character and reasonably so; she is a designer by profession and not a thespian.

The first episode starts with an Instagram post, we see Masaba updating her online followers about her moods and her day. She has a bit of an online diary, rightly so since most famous folks tend to share aspects, if not their entire lives with social media followers.

Social media is seen to be a recurring theme throughout the show and perhaps a crutch. While in this day and age social media is an integral part of our lives, this aspect may not identify with some audiences.

To depict people’s devotion to indulging in the private lives of celebrities, the entire first season surrounds the protagonist’s divorce. When a gossip columnist spills the beans about Masaba’s marriage in troubled waters, she tries her best to take control of the narrative.  She fails in doing so and therefore we see the details of her journey towards healing, her coping with reality and at times wanting to ignore it.

Her mother Neena struggles to find work as an actor of her age, though she is very talented and displays her skills in the show. It is their close relationship and camaraderie that warms my heart and seems the most genuine (DUH).

However, the show is super pleasing to the eye. Cinematographer Aditya Kapur captures and frames that pop of colours which will hold your gaze. The glamourous and fashionable clothes help too! We see also cameos of Kiara Advani and Farah Khan playing themselves.

Although the visuals in the show and the background of the protagonist’s life are interesting, the show does not satisfy our filmy needs. The series does not dive deep into the characters, their motivations, their spirit or subconscious behaviours. Which is what one needs to connect, even with a pseudo fictional work.

While the show does have some insightful elements, it feels like a superficial experience. Masaba’s debut story is not a cinematic classic but is undeniably easy to binge-watch.