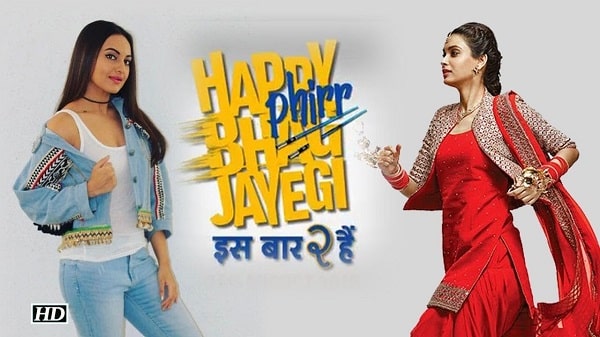 Reading Time: 3 minutesFilm: “Happy Phirr Bhag Jayegi”
Director: Mudassar Aziz
Cast: Diana Penty, Ali Fazal, Sonakshi Sinha, Jimmy Shergill, Jassi Gill, Piyush Mishra, Jason Tham
Rating: 3.5 out of 5 stars
There is a cause for excitement every time Harpreet Kaur aka “Happy” runs or escapes.
This sequel steals your heart once again. “Happy Phirr Bhag Jayegi” combines a little mistaken identity, romantic comedy and xenophobic musing into one of those genial films where you know everything is going to turn out all right in the end.

While in the original, Diana Penty as the lively, determined and bubbly girl, Harpreet Kaur aka Happy who would do anything for love, was the surprise package. In this edition we have her namesake in Sonakshi Sinha who keeps the fizz going, when she is kidnapped in Shanghai in a case of mistaken identity.
Taking off from the original, in this edition, in a complex and convoluted plotting, we have Happy (Diana Penty) accompanying her husband Guddu (Ali Fazal) to Shanghai. Guddu who is a singer of sorts has been invited there to perform at a show.
Travelling on the same flight to Shanghai is the horticulturist Harpreet Kaur aka Happy (Sonakshi Sinha). Why she travels to Shanghai and how she forms a bond with Kushwant Singh (Jassi Gill), an employee of the Indian Embassy after she gets kidnapped and escapes from the clutches of her kidnappers, forms the crux of this lively drama.
This film focuses much on Sonakshi Sinha and thus you do miss the spunky Diana as her role is reduced to that of a supporting cast and so is the case with Ali Fazal.
Singer Jassi Gill as Sonakshi’s love interest is a pleasant surprise. He is charming and fragile as he essays his well-etched role astutely. The contrast in his character is what makes him endearing.
Jimmy Shergill as the boisterous but unlucky in love, politician Daman Singh Bagga and Piyush Mishra as the retired, Pakistani Police Officer Usman Afridi, return as a comic pair. Their on-screen chemistry is palpable and they keep you in splits with their poker face but funny banter.

Denzil Smith is flawless as the sleazy antagonist Adnan Chow camouflaging as a suave and erudite businessman. How he teaches the Chinese to appreciate things that are Indian, makes for a good laugh.
Jason Tham as his lackey Chang, Aparshakti Khurana as Happy’s runaway-fiance Aman, have their moments of on-screen glory and they leave an indelible mark as actors.
Mudassar Aziz’s writing is fascinating. His dialogues are packed with punch as he plays with words, in Hindi, Urdu and smattering of Chinese this time. The gags are taut, fresh and brilliantly interlaid in the convoluted plot.
The graph of the narrative has its crests and trough but never is there a moment of equilibrium. Also his climax, though a riot, does not have the zing of a mad-caper.
With excellent production values, the film, shot extensively in Shanghai captures the city in all its vibrancy. The songs merge seamlessly into the narrative and the background score enhances the viewing experience.
Overall, this film might not have the spark of its predecessor but nevertheless, it is light-hearted enough to bring a smile to you face.
-IANS