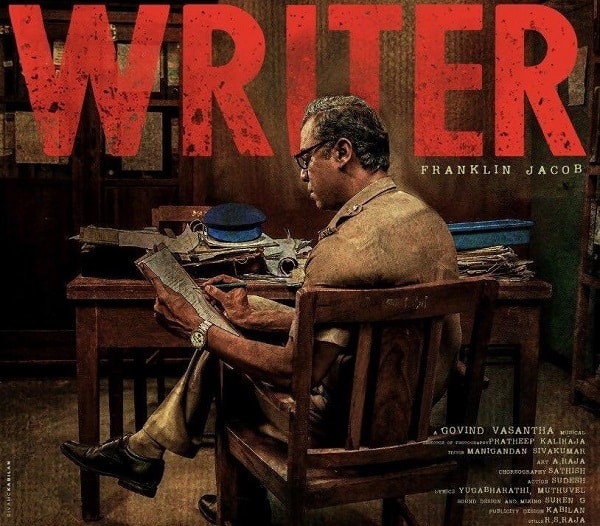 Director Franklin Jacob’s Writer is an interesting and engaging thriller that stands out for two reasons. Probably for the first time, a film tells what exactly happens in the lower rungs of the police force and how those at the bottom of the force are treated with contempt and made to work almost like slaves.

The second reason is it tries to make a case for permitting police force personnel to have a union, something which is not possible at the moment.

The film starts off with Thangaraj (Samuthirakani), who works as a writer in a police station in Trichy. On the verge of retirement, Thangaraj has two families to support — his first wife Amutha (Lizzy Antony) who has separated from him and his second wife Subha (Maheshwari) and her young son with whom he is living at the moment.

Thangaraj has just one dream and that is to have a union for police personnel. It is for this right that he has filed a case and continues to fight, despite several odds.

Thangaraj’s move to file a case against the police administration doesn’t go down well with the top brass of the police force. One day, a senior officer slaps him and hurls abuses at him for demanding a union for policemen. When he stands his ground and glares back, the officer orders a punishment transfer.

Thangaraj has no other option but to make his way to Chennai. Here again, he is looked down upon by those in the station and made to do tasks that are much below his grade. He bears everything and continues to work.

One day, he is asked to do “para duty”. His duty is to go and guard a suspect called Devakumar (Harikrishnan) who has been illegally detained by the inspector and the Deputy Commissioner in a marriage hall.

With no case file or details of why the man has been detained, Thangaraj hesitantly makes his way to the place to guard the suspect. Devakumar, a Ph.D scholar, is a Dalit who hails from a poor family. Thangaraj and the young man begin to get along well. A couple of days later, Thangaraj is asked to set Devakumar free.

Writer is engaging from the word ‘go’. It boldly shows how cops keep crime percentages at optimal levels and how “recoveries” of stolen goods are made and handed back to their owners.

It highlights the bargains that cops strike with those who have lodged complaints to make them withdraw their complaints. It also shows how cops operate in teams to discredit individuals and build non-existant cases. In fact, the film has sequences that show writers conjuring up imaginary situations. In short, it shows how unreliable the statements of police personnel are.

Franklin Jacob seems to have a good understanding of how the system functions and he uses this understanding well to tell a compelling story that draws our attention to the sad state of affairs prevailing in our society.

The film has some exceptional performances coming in from all its actors. Samuthirakani, in particular, is brilliant. He relishes playing a conscientious cop, who is caught between having to lie to protect his colleagues in the police force and trying to save an innocent individual who has incurred the wrath of the cops.

Harikrishnan as the young Dalit who is being framed for no fault of his is equally good. Subramaniya Siva as the uneducated brother of the Dalit suspect is outstanding.

Govind Vasantha’s music is just fantastic. It adds life to the proceedings and intensifies the emotions that the film is trying to convey.

Writer does not talk just about caste atrocities or atrocities committed by the police force on the public. It also talks about the atrocities the force commits on its own personnel and makes a strong demand for a redressal mechanism to be put in place.