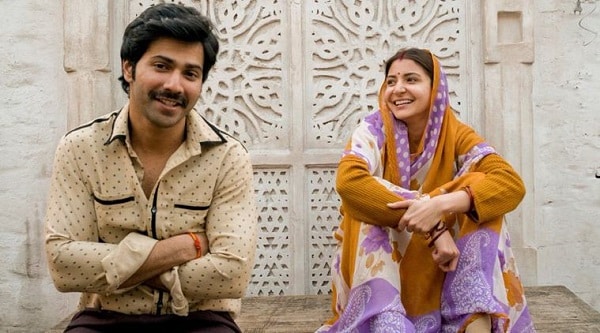 Reading Time: 2 minutesFilm: “Sui Dhaaga – Made In India”;
Director: Sharat Katariya
Cast: Varun Dhawan, Anushka Sharma;
Rating: ***
After I saw Sharat Katariya’s debut film “Dum Laga Ke Haisha”, I hoped the director won’t sell out to the star system. But his second film starred a market-friendly lead star.
I hoped Kataria’s second film won’t lose the charm and innocence of the first. Providentially, “Sui Dhaaga” loses none of the delicacy and sting even while providing space to its leads to surrender to their characters.

Varun Dhawan surrenders to his character Mauji as though the role was tailor-made for him. Never afraid to look less than heroic on-screen, Varun furnishes his tailor’s character with a rugged candour. This is an actor and a character who are so sincere to their craft that they don’t mind crawling on the floor if that’s what it takes to stay afloat.
Varun’s performance is filled with a smothered disappointment. It takes his quietly confident and deceptively docile wife Mamta (Anushka) to bring out the suppressed ambition in her husband.
I am afraid Anushka Sharma, a fine actress in the best of times, is just not equipped to get all the intricacies of her character tightly into place. Anushka’s is a ‘look-I-can-do-it’ performance filled with a kind of phoney Jaya Bhaduri-angst that works well within the film’s claustrophobic working-class atmosphere.
The aspirational narrative of how Mauji finds his groove with considerable help from his street-wise wife, works like a charm because all the performers are solidly sincere. But most of all, “Sui Dhaaga” wins our hearts because the director never milks the milieu for soppy sentimentality.
Nor does he swing the other way to make the middle-class ambience a place to celebrate misery. The tone is constantly energetic, yet poised.
Katariyaa is neither awed by stillness nor intimidated by noise. He listens to the heartbeat of the heartland. We listen.