This review is based on its first four episodes, the run-time each episode ranging from 15 to 21 minutes. So far, it is engaging.

The premise of the series is akin to Director Priyadarshan’s 2006 release Malamaal Weekly, where a man wins a lottery ticket and his life turns topsy-turvy.

With titles like ‘Lag Gayi’, ‘Baasi Roti’, ‘Nano Thug Lenge’ and ‘Saaste Sherlock’, each episode is endearing as well as interesting. The episodes don’t fuse in a way that’s consistently pleasing or cinematically satisfying. Neither is its sum greater than the scenes and the sequences put together, yet they are funny in their own ways.

The comedy, which surfaces in seemingly broad bursts of rib-tickling moments, is more often bizarre than funny, with the characters taking pot-shots at themselves.

Set in Delhi, the episodes are a slice of life in the chaotic city. The tale revolves around Bhuvan, a guitar-strumming young man, and his family, which includes his father Babluji, and mum Janki. His father lands up purchasing a lottery ticket and how this affects and complicates everyone’s lives in their universe is the crux of the narrative. 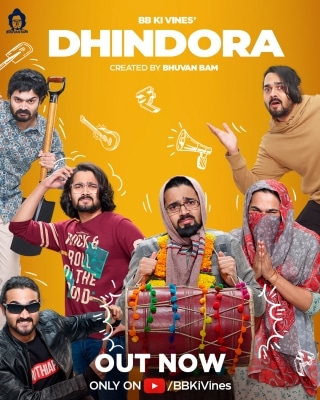 The writing is crisp with quirky one-liners that linger on cuss words or rhymes. The dialogues often draw a chuckle or two. By the fourth episode, the storyline bloats the running length to the point where Dhindora threatens to wear out its welcome.

YouTuber Bhuvan Bam single-handedly essays nine characters from the BB Ki Vines Universe. He plays himself, his father Babluji, his friends, Bhanchoddas, Sameer Fuddi, Titu Mama, and others. Each one of them is distinct in look and design. They do not seem to overlap each other, as he effortlessly portrays them with ease.

He is aptly supported by Anup Soni, who plays himself in an extension of his Crime Patrol series, where he mouths his “Savdhan rahe sartak rahe” meme. Rajesh Tailang as the moneylender and Gayatri Bharadwaj as Tara, an interning doctor and Bhuvan’s love interest, respectively deliver earnest portrayals of their characters.

The series boast of decent production values and Delhi is superbly exploited. The visuals are accompanied by a brilliant soundtrack put together by Music Director Omkar Tamhan. Songs such as ‘Dhindora’ sung by Kailash Kher, ‘Saazish’ by Rekha Bhardwaj, and ‘Ban Gayi Zindagi’ by Bhuvan Bam, elevate the viewing experience.

11 Indian films and series to watch in December 2021