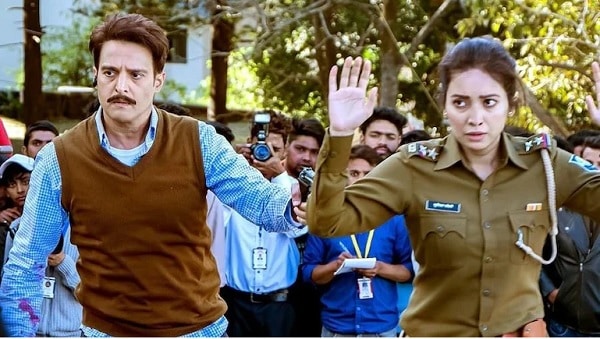 Reading Time: 2 minutesA cop runs against time to stop a suicide bomber who holds a group of children hostage in a school. The bomber forces the cop to commit certain unlawful acts, if he must see the children alive and, of course, there is a twist in all this.

Collar Bomb operates using a basic thriller format. The film has an interesting idea about one’s past actions catching up, but stops short of becoming the pulsating psychological play that the narrative seems to promise. The story never quite engages the viewer despite introducing the mandatory twists, and it does get too absurd to be logical. 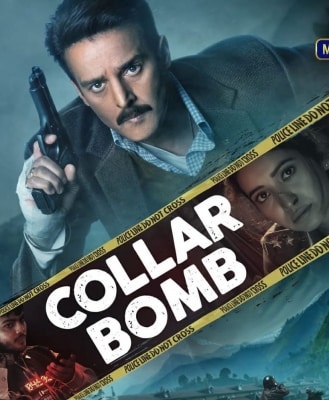 Writer Nikhil Nair sets up his story in a school in scenic Sanawar. Not much time is wasted in introducing the plot. High-profile cop Manoj Hesi (Jimmy Sheirgill), in town to admit his teenage son at the school, finds himself among a room-full of people held hostage by a man who walks in wearing a collar bomb.

The man presently lets the adults out but continues holding the kids hostage, including Hesi’s son. He gives the cop a phone and tells him to step out, and complete certain ‘tasks’ according to instructions he receives over phone, if he wants to see his boy and the other children alive.

As an enterprising local cop, ASI Sumitra (Asha Negi), tries rallying the police unit to ensure safety of the hostage children, it becomes obvious there could be a personal motive behind all that is going on, and it could have to do with a recent case Hesi solved.

Director Dnyanesh Zoting is incohesive while setting up the drama and even less impressive while tying the loose ends. The plot has its loopholes and the climax, inadequately executed, could seem incongruous.

The film benefits from good acting by the cast. Jimmy Sheirgill, returning as a policeman after a while, is impressive as ever playing the cool cop with a blemish, while Asha Negi scores with the moments of drama that the script gives her. Rajshri Deshpande gets a role with an interesting arc, and she makes the most of it. Most of the prop cast have been aptly cast.

Collar Bomb is passable fare, done in by inept writing and execution. The very average tech-specs do not add to the drama in any way, and the film does not have a redeeming feature strong enough to stay in your mind.