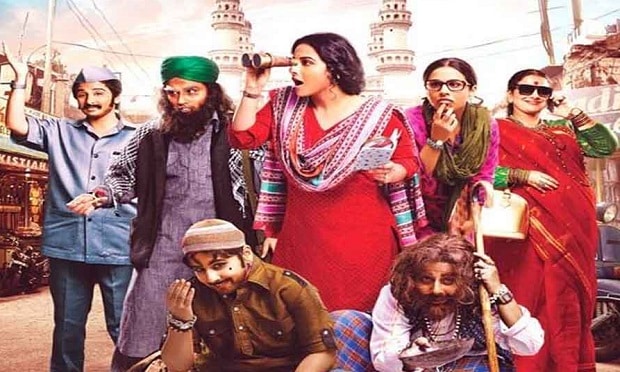 As a detective comedy-drama Bobby Jasoos is filled with furtive delights and the ambivalent aromas of a city (and a heroine) that never sleeps.

If the truth be told, and it’s the truth that our endearing Hyderabadi Nancy Drew is drawn to, there are two heroes in Bobby Jasoos. One, of course, is Vidya Balan. But the other more surprising hero is the city of Hyderabad. You can almost feel the unrehearsed jostle of a city always in a celebratory mood, the colours and gaiety, and yes, the biryani.

Oh yes, there is a whole mouth-watering section devoted to biryani where our lady snoop takes her extended family hand-in-hand on an eating expedition.

So may I add another hero, cinematographer Vishal Sinha to the ravishing roster of achievers in this film about an under-achieving girl trying to impress her father into finally giving her some desperately-needed attention and affection.

Vishal captures the bustle, jostle, aromas and attitudes of Hyderabad with the same affection of a non-tourist as he did when he shoot Raanjhanaa and Issaq in Varanasi. You can almost touch the city’s skyline and then willingly dive right into our heroine’s over-whelmed heart as it searches for all sorts of clues for what humans do to and in a city mired in mystery and intrigue.

Debutant director Samar Shaikh is as proficient in bringing us the city’s endearing as well as unspeakable transgressions, as he is in showing Bilkis, alias Bobby’s home life.

In no time at all we know every member of Vidya’s filmy family. That they are played by some superb actors, notably Tanve Azmi (as a busybody match-maker) and Rajendra Gupta (Vidya’s father), is just such a stroke of luck here. Bobby Jasoos has the kind of bouncy effervescent energy that somehow eludes today’s cinema.

With her impeccable comic timing, faultless dialogue delivery (the Hyderabadi was last spoken with such effortless seductiveness by Shabana Azmi in Ankur and Mandi) and eyes that not only speak volumes, they chant reams of poetry on the hurt and healing process of existence, Vidya just nails her goofy free-spirited character.

This is her best performance to date. Yes, even better than Kahaani and certainly far superior to the over-rated over-sensationalised The Dirty Picture. In the title role she sparkles, shines and shimmers providing us with more proof of her versatility.

The mystery that surrounds Bobby’s cryptic client Kiran Kumar’s assignments for missing persons provides a kind of conspicuous backdrop to Bobby’s free-wheeling relationship with the world at large.

Bobby Jasoos also left me with one of the most heartwarming romances in recent times. Bobby/Bilkis’s brittle relationship with a television journalist Tssavur (Ali Fazal) grows in the plot with nurtured niftiness. Not for a minute does the relationship appear unreal or manipulated.

There is this wonderful episode in a narrow lane between Bobby and Tassavur where they discover their true feelings for one another.

This is the kind of romantic writing that cinema today sorely misses. And when was the last time we heard the santoor playing in the background in a romantic sequence? Slow clap for Shantanu Moitra’s thoughtful and dreamy background music.

That Vidya is partnered on screen by the striking Ali just gives a dizzying spin to the narrative. Though the film belongs to Vidya, Ali makes his own space and owns his part with pride and confidence. Make no mistake – he is star material, probably Vidya’s most confident co-star to date.
Bobby Jasoos works so well because it creates a unique yet relatable world for its female hero without making her seem super-vulnerable (like Kangana Ranaut in Queen) or super-confident (like Shabana Azmi in her best roles).

Bilkis/Bobby in her salwar-kameez, sneakers and various super disguises, is a fearless bundle of bumbling energy. Her infectious gusto and irresistible joie de vivre envelope this biryani-flavoured Hyderbadi delight of a film.

Like Vidya’s multiple disguises, the film’s ability to surprise never flags. If Bobby/Bilkis revels in a sense of adventure the narration doesn’t lag behind.

You can find flaws here. But you won’t hold them against the film. That’s a guarantee.