He was the ultimate 'phenomenon' for the sheer ease with which he defied the cliches of image, writes VINAYAK CHAKRAVORTY 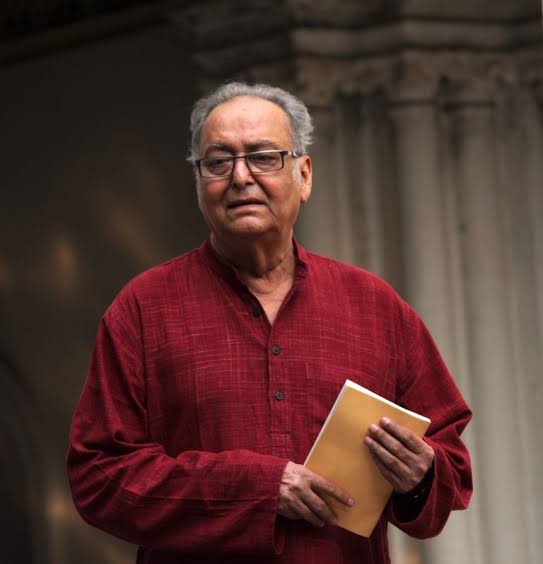 He was the alt superstar of Bangla cinema in its glory years, the affable Bhadralok icon who crafted a towering stature ironically banking on down-to-earth, believable characters that represented middle-class Bengal. The brand of stardom was in stark contrast to the other shining luminary of contemporary cinema in the state — Uttam Kumar — whose position as Mahanayak in the Bengali psyche was primarily cemented in idol worship and mass hysteria.

Soumitra Chattopadhyay — Chatterjee to anglicised India — answers to the term ‘phenomenon’ as absolutely as few actors do, for the sheer ease with which he defied the cliches of image. His stardom was sensational, and yet born out of realism. He was the mascot of the peerless Satyajit Ray’s oeuvre, having worked with the maestro in 14 films, and yet he scored with the same assuredness in works of contemporary commercial powerhouses as Ajoy Kar and Tarun Mazumdar. He is the Dadasaheb Phalke Award (2012) and Padma Bhushan (2004) recipient who was also honoured with the Legion d’Honneur (2018) in France for his contribution to world cinema.

Importantly, Soumitra Chattopadhyay’s greatness as a screen icon will survive the test of time in Bengali pop lore because he had something for everyone. For, he was not just Satyajit Ray’s Apu. Beyond such a nuanced portrayal, he could also simply become Ray’s Feluda and reach out to every audience, eight to 80.

It took a Ray to bring to life Soumitra’s greatness, and yet the account of their first meeting is a well-known story in Bengal. Ray was looking for his adult Apu in Apur Sansar, final part of the Apu trilogy that started with Pather Panchali. A friend introduced Soumitra to the master filmmaker who promptly declared the budding actor looked too old to be Apu, a college student according to his script. Soumitra would eventually bag the role opposite Sharmila Tagore, of course, and the rest is history.

Soumitra’s cinematic fate is overwhelmingly dictated by the great cinema of Satyajit Ray, so much so the maestro’s filmography through his most important phase outlines the actor’s career graph.

It was a filmography that Ray, one of the world’s greatest filmmakers ever, shared with his chosen on-screen emissary. But if Ray worked with Soumitra 14 times, almost every major filmmaker the actor collaborated with also tended to repeat him. If anything, beyond underlining his credential as an artiste that fact stands a testimony to his professionalism and disposition as a human being.

Consider a few other diversely prolific filmmakers beyond Ray who worked with Soumitra, and you get the picture.

Most of his directors have often spoken about the insatiable passion he had for his craft. It was something that ensured he would stay busy as ever till his last days, essaying character roles with the same enthusiasm with which he executed starring roles in his heydays.

His 300-plus film career probably can be explained by his highly adaptable quality as an actor. He was at home working with new-age Bengali filmmakers as Atanu Ghosh (Mayurakshi), Suman Ghosh (Podokkhep, Peace Haven, Dwando, Basu Paribar), Partha Chakraborty (Samantaral) and Nandita Roy and Shiboprosad Mukherjee (Posto).

He did move outside Bengal into Bollywood domain twice. In 1986, he acted opposite Roopa Ganguly in the Hindi short film Nirupama, based on Tagore’s story Dena Paona. He also had a role in the 2002 release, Hindustani Sipahi, based on Utpal Dutt’s renowned Bangla play Pherari Fauj.

These though were temporary departures. For most parts, his staggering career is based on his Bengali filmography. It is a body of work that has given him recognition beyond the National Award as Best Actor (Podokkhep). He also received the Sangeet Natak Akademi Award in 1998.

Although his greatness lies in his body of work before the camera, Soumitra did try his hand at filmmaking, too. His directorial effort Stree Ki Patra, a telefilm based on Rabindranath Tagore’s Streer Patra released in 1986. The film starred Roopa Ganguly and Usha Ganguly.

That the legacy of Bangla cinema’s Grand Old Man was established in his lifetime is obvious from the number of GenNow actors who have followed in his footsteps. Young talents in the Bengali film industry of today such as Parambrata Chattopadhyay and Abir Chatterjee have fashioned their careers in the lines of Soumitra, seeking stardom without losing connect with Bengali middle-class realities. These are actors who have carved a niche in what is today known as the multiplex cinema circuit, catering content-driven entertainment of refinement, removed from the cliches of kitsch. It is something Soumitra relished doing all those decades ago.