The quest for eternity 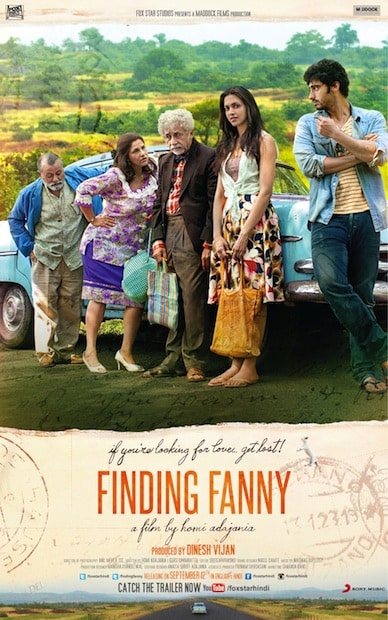 Now here’s the thing. Finding Fanny has a dead cat in a traveling car that the cat’s owner knows to be dead, and towards the end, a dead painter-artist who nobody cares whether he’s dead or not.

Between these two points of mortality shared by the script lies a huge unshared joke about life and how it screws you up when you aren’t watching. Watching this weirdly wonderful ode to a long-forgotten anthem of love, I felt like a person who receives a really costly gift which is of no use to him.

You know that feeling of holding a precious parcel which you can’t tell the right-side-up from the wrong-side-down? That’s Finding Fanny. Homi Adajania’s world of insulated eccentricities invites you into its languorous folds with a yawning casualness. These characters, so fastidiously crafted to appear utterly adrift, couldn’t care less whether we like them or not.

That’s what makes them so deliciously appealing. They are a gallery of weirdos content to be perceived as such, as long as they are allowed to lead their lives the way they want. There’s the very engaging Dimple Kapadia playing a prosthetic-ridden, bum-happy mother-in-law to the widowed Angie (Deepika Padukone). The two beautiful actresses, one unnecessarily fattened in the wrong places for satirical emphasis, had earlier been seen together in Adajania’s Cocktail.

The frisson between them remains delectably unidentifiable even when their on-screen definition is specifically re-defined towards the end of the film when the placid Goan village’s resident postman Ferdie (Naseeruddin Shah) is close to finding his lost love.

Does Ferdie finally find Fanny Fernandes? Nobody really cares by the time the long 93-minute film draws to a close.

There is a helluva lot of self-indulgent self-pleasuring in the narration. Director Adajania loves his characters as long as they remain true to their soporific state of existence. The search for “Fanny” is a metaphor for the pursuit of that element of unconditional surrender to self-indulgence where you tell yourself nothing matters except your personal happiness.

Every character in Finding Fanny is supremely selfish, although some, like the incandescent Angie (Deepika) and the surly Savio (Arjun Kapoor), pretend to care for what happens to others. Angie and Savio will make up and make out before the film is through. “It will get better, right?” Angie asks Savio – hopefully about the sex.

For us to sink into the narrative’s discomforting folds, we have to wait for the guffaws to settle down. And who can tell when Adjania’s characters will actually stop laughing at fate and start laughing at themselves? You really can’t trust these unhinged emotional marauders who take off in a jalopy.

The car has seen better days, just like the time-ravaged characters. Naseeruddin Shah’s wizened features suggest more wisdom than his character of the awkward over-the-hill love-struck lover-boy is capable of feeling. Pankaj Kapoor, on the other hand, is bang-on as the smug self-serving painter who loves the ravaged Rosie (Dimple) with or without her ample derriere and finally insults her so hard, you want to knock his bloody teeth out of their roots.

Between them, Naseer, Pankaj and Dimple manage to keep the narrative’s fire aglow. These are people whose lives can splutter to a halt any moment, just like the car they are travelling in. A lot of the film’s perverse brilliance hinges on the way cinematographer Anil Mehta shoots the relation between the characters and their Goan home-life. Mehta shoots the travelling trio of love veterans with an endearing edginess.

Goa seldom seemed so windswept and soporific in our films. At its vortex is the tragic Angie. Deepika’s Angie is a sexy half-widow who seems to have abandoned her widow’s weeds in pursuit of a more sensual life. She plays the characters as a haunted beauty looking for a place to hide her uncontrollable beauty. Her coupling in the fields with the open-mouthed Arjun Kapoor might have worked better if the director didn’t seem so keen on appearing normal in his storytelling while dealing with characters whose lives are over. And are in pursuit of a life beyond inertia.

This is Zindagi Milegi Na Dobaara of the Goan world where aspirations are so low you would have felt embarrassed for the characters if they hadn’t decided to preserve a core of dignity during times of tumult and stress.

Does Naseer’s character finally find Fanny? Frankly it doesn’t really matter at the end. And I am not sure if that’s good or bad.