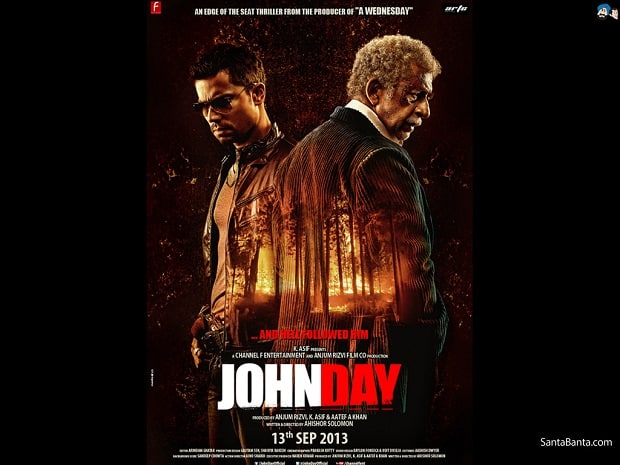 Viewing John Day has the thrill of discovering an unexpected little gem. It doesn’t matter where writer-director Ahishor Solomon got the raw material for this gripping cat-and-mouse tale. What counts is the quotient of curiosity and suspense simulated by the script. And there, John Day ranks very high.
Not for a while have we seen a film so steeped in despair, so swathed in anxiety, so audaciously draped in despair, and yet it engages our senses without miring the plot in morbidity.
The story is not for the squeamish. The two main characters are constantly haunted by their irrevocably tragic parts. Naseeruddin Shah and Randeep Hooda, real-life guru and pupil, play people who know no happiness. Incidents from their past continue to shadow and chase their present. There is scarcely a moment in the plot when John (Shah) and Gautam (Hooda) are happy except when they are with their beloved ‘other’.
But Shernaz Patel, who plays Naseer’s wife and the very beautiful foreigner Elena Kazan who plays Randeep girl, are troubled by their own ghosts.
John Day is a restless edgy drama of the doomed and the damned. Randeep has played a fugitive shadowed by his own past before. But this is certainly his most layered character, which he performs with the kind of gravelly gusto that allows us to get only as close to the sullen character as he wants us. Towards the end-game when the momentum gets frenzied beyond recuperation, Randeep’s character’s softer side emerges.
He has a brilliantly written monologue with a comatose character where we get to know how much this brutal man loves his woman. Yet he can die for money and for love. It’s a dichotomous character torn between self-abnegation and vendetta.
In a way Randeep character plays a mirror-image of Naseer’s banker gone amok. India’s most vaunted actor now plays a wizened common man pushed to a corner by the monstrous corruption in out socio-political system.
In John Day the terror that Naseer’s character battles is far more personal, moving and compelling.
It is very difficult to speak out openly about the characters and their motivations without giving away the plot. With John Day you become one with the character’s battles, without getting judgemental over their actions.
Some of the things that the characters do are unmistakably brutal in a cold world with no comic relief, at least none where you laugh out loud at the ironies of life.
John Day brings the indomitable Naseeruddin and the intriguing Randeep together in a taut cat-and-mouse chase that stays a step ahead of the audience until the shattering end-game.
But other actors are equally at home in this inky kingdom of greed and gluttony. Vipin Sharma and Makrand Despande are very engaging in their supporting parts. But the film’s third hero is Sandeep Chowta’s background score, creating a world of emotions beyond spoken words for Naseer and Randeep.
This is a world where there is no escape from sorrow and grief. Enemies are clobbered and butchered mercilessly, simply because life is as randomly brutal as we make it for ourselves. And cinema such as this reminds us that moral values of good, evil, justice and comeuppance mean nothing to those who have nothing to lose.
For a film about losers, John Day is a paradoxically profitable movie-viewing experience.
Subhash K. Jha