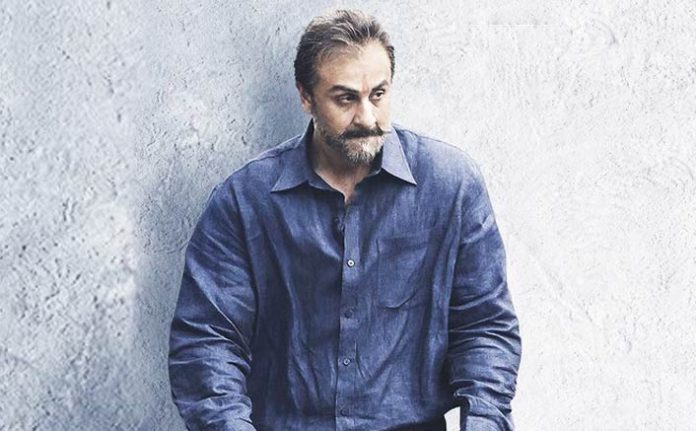 So, it was all the media’s fault. The newspapers, damn them, hid behind question marks and ‘sources’ to declare our Sanju Baba, arrey Sanjay Dutt yaar, a terrorist.

Raj Kumar Hirani’s long-awaited bio-pic on the controversial star is long on drama, short on facts. It cleverly makes Sanjay Dutt look like a victim of his own naivete. To his credit, Ranbir Kapoor plays Sanjay Dutt with such ardent goofiness and sincerely disingenuousness that I seriously began to wonder if the film’s opening joke — about a bogus biographer played by Piyush Mishraof (all people!) likening Dutt to Bapu – had come true.

Raj Kumar Hirani and his writer Abhijat Joshi lay the blame for Dutt’s sordid image as a terrorist squarely on the media. There is a silly newspaper editor played by Prakash Belawadi who is shown as “guilty” of printing an article asking “Is Sanjay Dutt Finished?”.

Cut to an awards function where our screen Dutt wins the best actor for Munnabhai MBBS (he did win in real life). Dutt’s father, played by a hopelessly miscast Paresh Rawal, turns around and asks the editor to write another article stating Sanjay Dutt is not finished.

“And this time without the question-mark,” the senior Dutt smirks.

Like it or not, the plot of this semi-truthful bio-pic leaves us with many question marks. While it aptly focuses on building up a case beyond the legal one to substantiate Sanjay Dutt’s image as a victim of his own naivete, it brings into play characters and situations which have no place in the real Sanjay Dutt’s life. The girlfriends, whom we’ve all known through the years as being part of the Dutt folklore, are hurriedly dealt with as though they must be gotten out of the way. Sonam Kapoor appears to be playing an amalgamation of Tina Munim and Richa Sharma.

Sonam and Boman Irani (playing her dad) are made part of a horribly cheap joke where a dead-drunk Dutt and his evil conniving Parsi sidekick Zubin Mistry (played by an enormously hammy Jim Sarbh) create a drunken confusion over a drinking binge and the sex act. Laboured and lewd the gag ranks right up there with Hirani’s “balaatkar” joke in 3 Idiots as the crest of tastelessness, any day filthier than the overflowing toilet in Dutta’s cell.

The modus operandi of this sinfully entertaining semi-fictional bio-pic is to blow up all the situations in Dutt’s drama out of all proportions, and then whittle them all down to a whiny protest where the protagonist becomes the portrait of self-injurious victimhood. Some of it works, thanks to the crackling immediacy that Ranbir and his screen-friend played by Vicky Kaushal bring to their roles. If only the screenwriter Abhijat Joshi had brought a more mature vision to this friendship.

The scenes showing Kapoor and Kaushal whooping it up are like scenes out of Hirani’s 3 Idiots. Again some of the situations created between the friends reek of lowbrow aspirations. Karisma Tanna as Vicky Kaushal’s girlfriend who sleeps with Dutt deserves the award for the tackiest role played by a woman in recent times.

What works is the film’s ferocious pace. The narrative hurls across the catastrophic events in Sanjay Dutt’s life looking for ways to deflect the blame. Ranbir Kapoor and Vicky Kaushal furnish a funky brotherhood to this one-sided look at a controversial star’s life. Many of the other actors, specially Manisha Koirala as Sanjay Dutt’s mother – the legendary Nargis – hardly get time to breathe before the narrative hurls them into a whitewashing whirligig.

Wonder what the outspoken Nargis would have to say about this semi-truthful bio-pic on her son.

With a question mark, of course.