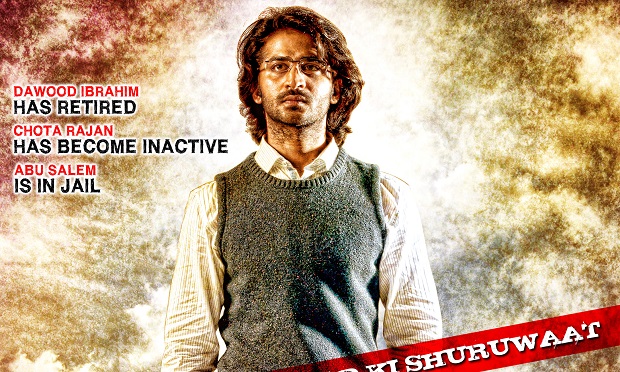 Spot the difference. It’s the same in all-apparent details. Mumbai’s underworld caught in a compromising position by Ram Gopal Varma (RGV)’s camera, prying into the mutilated lives of characters looking so scruffy and aggressive, you wish they would leave aside the bloodbath and just take a ‘bloody’ bath.
Yup, this is ostensibly, very familiar RGV territory. But hang on, something very different is going on here. Strikingly rich and articulate in production design, Satya 2 is a startling original take on the evolution, collapse and restoration of Mumbai’s underworld in ways that question the economical paradigm of a nation on the brink of damnation.
Yes, we are talking about our country where crime and corruption grow in direct proportion to the apathy of the powers that be. Given the incredible leap in atrocities against the ‘un-empowered’ (to coin an anti-capitalistic phrase) where does the poorest of the poor go when his daughter gets gang-raped, his wife dies of adulterated medicine and his father cannot get his Rs.500 pension without paying a bribe?
RGV’s film shows a devilish daring. It takes the underworld into confidence to build an anti-corruption empire that would feed the fed up by paralysing the super privileged.
It’s a startling premise, and one that RGV is not able to work out into any tenable blueprint of socio-political reform. But the very fact that he is able to suggest a solution, no matter how implausible, to the current climate of desperate de-escalation of morality, is reason enough to applaud this flawed, but riveting drama of the doomed and the dangerous.
Beware of the hopeless. They have nothing to lose except their despair. This is the propelling premise of RGV’s neo-Satya’s plot. The narration is most of the time taut and tactile as we follow the new millennium Satya’s journey from a village in Rajasthan to the vortex of gangsterism in Mumbai. Ironically, the police, sturdily represented in the film, don’t seem any different in its activities from the underworld.
RGV gives the saga of gangsterism a new spin, creating for the underworld genre of cinema an entirely new formula and folklore of survival.
Vikas Sharaf’s cinematography captures Mumbai in stunning sepia tones suggesting decadence and rebirth in the same range of vision.
Visually Satya 2 is RGV’s smartest and most eye-catching film in years. The shootouts on the streets of Mumbai, which have been done to bludgeoning death in the past, acquire a new life here. The sequence where Satya is shot at in an open cafeteria is specially brilliant in the way the editor cuts to the chase without getting out of breath.
The under-construction buildings, a favourite haunt of filmy gangsters, are shot here with vigorous virility.
So many years after Satya spoke a new cinematic language, RGV is back in form displaying the sparks of brilliance that made the first Satya a trendsetting experience. No relation to the earlier film except the one of bhai-giri, Satya 2 sneaks slyly into Mumbai’s dark dangerous sinister and ominous underbelly.
RGV’s eye for the migrant’s dismantled soul is unerring and powerful.
The performances range from the reined-in to the embarrassingly over the top. In the title role, Puneet Singh Ratn’s restrained intensity aids the work’s aura of karmic catastrophe.