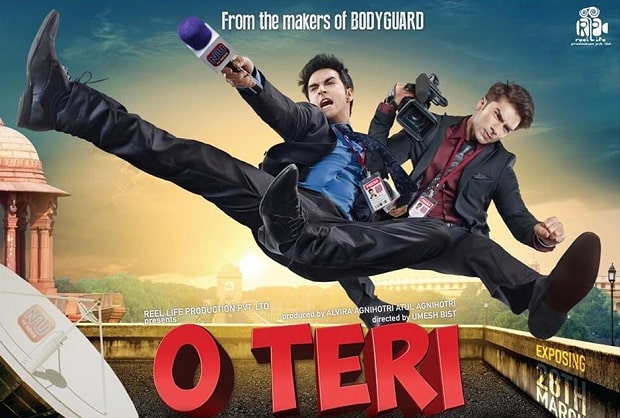 Luckily, this is not an official remake of Kundan Shah’s classic Jaane Bhi Do Yaaron. If it was, the makers of the original could have sued for defamation.

O Teri borrows the concept of two bumbling, very unprofessional professionals who chance upon a scam from Kundan Shah’s film and turn it into an extended Santa-Banta joke. It was Naseeruddin Shah and Ravi Baswani in the original. It is Pulkit Samrat and Bilal Amrohi in this remake, designed to give ulcers to a civilisation doped on the hope that cinema can shake the corrupt through satire.

O Teri is like a stretched-out political joke where the raconteur forgot the punchline and is hoping he would rediscover it in the process of undertaking his aimless ramble.

Samrat and Amrohi are given lines that sound like bulk SMS messages. They try to enjoy the banter. But, poor freshers, they can’t really savour the unpalatable. If television anchoring was meant to be as brainless as shown in this film, then our tainted politicians would safely find alternative employment.

And really, Sarah Jane Dias doing a Bhakti Bharve from Jaane Bhi Do Yaaron? That is funnier than anything this film has to offer.

Anupam Kher doing Pankaj Kapoor’s role from Kundan Shah’s original, is cast as a Suresh Kalmadi kind of brazenly corrupt politician who cannot be amusing unless given some kind of a humour platform beyond the ordinary rites of laughter.

Tragically, the intended satire is so frumpy and baggy that it collapses under its own weight.

Debutant director Umesh Bist would have done well to study Kundan Shah’s cult classic for its contoured, sly comicality. Bist attacks the material with wolfish relish, making a hash of the political satire, much in the way that the Kalmadis of politics are doing of our nation.

Save yourself the agony of watching this masala-mix version of Jaane Bhi Do Yaaron. Just watch the original again.